Love, Mystery and Murder Return to Masterpiece on PBS 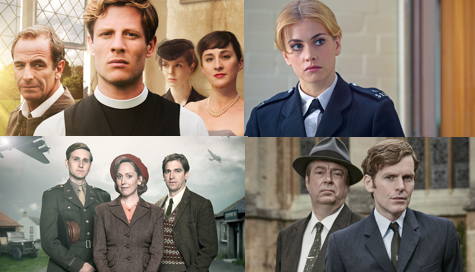 Another season of PBS Television’s Masterpiece is in full swing with the return of Grantchester and the premier of Prime Suspect: Tennison. We’ve already seen the end of Downton Abbey, Indian Summers and Home Fires, the latter cancelled with yet another cliff hanger ending. Such is life in British television. Fans will no doubt eagerly await the return of Poldark, Call the Midwife and others, but for now, let’s take a peek at the shows currently running as part of the PBS Sunday night line-up. I’ve watched them all, however there won’t be any spoilers so don’t fret gentle readers.

1. Prime Suspect: Tennison and Endeavour
We came to love Helen Mirren as Inspector Tennison in Prime Suspect through 7 seasons and much like the late John Thaw in Inspector Morse, fans have hungered for more. Endeavour has been a fabulous look at the shaping of young Morse, so well cast and ably acted by Shaun Evans and a cast that includes the great Roger Allam and Anton Lesser. Endeavour is my personal favorite of the newer mysteries, perhaps because I was a huge Morse fan. Inspector Lewis never quite did it for me, but I appreciated the fact it carried the Morse mythology further. How does Prime Suspect: Tennison fare?

Let’s first look at a few previous BBC shows featuring young, strong female constables that preceded it. The critically acclaimed Life on Mars with John Simm and featuring Liz White as PC Annie Cartwright set the standard for a young, brilliant woman dealing with the male dominated atmosphere of the 1970s. It’s sequel/spin-off “Ashes to Ashes”, starring Keely Hawes, took place in the 1980s, however elevated her character to detective, but dealt with the same issues of misogyny and other issues of the day. “WPC 56”, starring first Jennie Jacques as PC Gina Dawson, and Claudia Jessie as PC Annie Taylor, tackled similar issues a decade earlier in the 1950s. Tennison takes place in the 1960s, and is a much grittier turn on a similar theme. Like Endeavour’s Evans as a younger Thaw, you can begin to see Mirren’s character evolve in Stefanie Martini, who plays the young Jane Tennison with a quiet conviction.

What can I say about Endeavour? This is perhaps the best season yet, and faithful Morse fans will be in for a treat. Morse will face a myriad of challenges to overcome, both professionally and personally. I won’t give anything away, but long time viewers may want to revisit the classic episode from the original series “Dead on Time”; as Morse encounters his ex-fiance, all while falling in love again in the midst of a homicide investigation. A truly, bitter sweet ending with Thaw turning in one of his best performances of the entire series. Endeavour will touch on the events of that episode and it’s one you won’t want to miss.

2. Grantchester
What can I saw about the uber talented James Norton as Sidney Chambers, the mystery-solving vicar in love with a pregnant married woman? Between the last season of Grantchester, starving fans got to see him in the brilliant new adaptation of “War and Peace” as Prince Andrei Bolkonsk, and again as he reprised his role as the maniacal Tommy Lee Royce in “Happy Valley”. Robson Green is back as the flawed Chief Inspector Geordie Keating, and longtime EastEnders actress Kacey Ainsworth as his dutiful wife. So much happens in this season that to say anything other than this is perhaps the best yet should suffice.

I highly recommend watching each of these shows, and if you are a true Masterpiece fan, you will be pining for more. Fortunately, you will also have new seasons of “Poldark”, “Call the Midwife”, “Victoria” and others to look forward to. More on those shows and others next time.