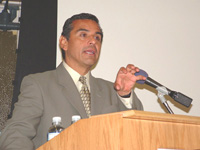 The Los Angeles mayoral election is March 8, and those with San Francisco connections will play a major role. Campaign managers for two of the five leading campaigns opposed each other in San Francisco’s 1987 mayoral contest, while another challenger has brought in Eric Jaye, who ran Gavin Newsom’s 2001 mayoral campaign. With Dean guru Joe Trippi and Feinstein campaign chief Bill Carrick also involved, the Los Angeles race has set a municipal record for rounding up the usual suspects.

In 2001, the Los Angeles mayor’s race between James Hahn and Antonio Villaraigosa galvanized the city in a way that San Franciscans would experience in the Newsom-Gonzalez runoff of 2003. In both cases a Latino challenger mounted a massive grassroots campaign against an Establishment candidate, only to lose narrowly.

The early line on the race is that incumbent Mayor Hahn has been so damaged by scandals and the loss of his African-American base that he may well not make the May runoff. This will set up another “fight for the soul of the city” as the moderate San Fernando Valley-based Hertzberg squares off against Villaraigos’s working-class, Latino supporters.

But like many political consultants, Smith seems happy to go with the flow. He helped Villaraigosa in the 2001 runoff after managing the general election campaign of a Republican who finished third. The two men obviously enjoyed working together, and if Smith can vault a progressive Latino activist to the Los Angeles mayor’s office, few will care about his less than liberal past.

Smith will be joined in Los Angeles by Richie Ross, Agnos’ campaign manager in 1987, and by Eric Jaye, with whom he worked on Newsom’s 2001 campaign. Ross has managed all of Alarcon’s campaigns since 1993, while Jaye is assisting on the campaign to elect the campaign’s most conservative candidate, former police chief Bernard Parks.

Veteran campaign consultant Bill Carrick will repeat his 2001 role as Hahn’s campaign manager, and it was his vicious and some felt racist television ads against Villaraigosa that many feel swung the race. The Latino leader likely picked Ace Smith as campaign manager in preparation for similar attacks, or to wage his own; the Los Angeles Times describes Smith as having “made a national name for himself by digging opponents’ skeletons from closets.”

Bob Hertzberg is the only candidate without a San Francisco connection, relying instead on a campaign manager with experience winning local races in the San Fernando Valley. But the former Assembly Speaker has also brought in Dean guru Joe Trippi to run his Internet operations.

If you have ever wondered how the power of the Internet could be maximized in a local race, keep an eye on Trippi’s Los Angeles operation.

At one level, the mayoral field’s reliance on well-worn San Francisco consultants makes sense; they all have some record of success. But for the entire field to turn to prominent hired guns raises the question whether the 2005 campaign is likely to produce any tactics or strategies that are new or unexpected.

With the exception of Carol Butler, a Texas consultant who is managing the longshot Parks campaign, all of those running mayoral campaigns in heavily Latino Los Angeles are white men. Of this group only Ross has a background in grassroots politics, but he has been a free-spending Sacramento consultant for over two decades.

Recent success appears not to have been a criterion for the consultant’s selection. Eric Jaye just had his hat handed to him in San Francisco, and Bill Carrick led the unexpectedly weak Presidential campaign of Missouri Congressman Dick Gephardt. Joe Trippi failed to get the Dean campaign past New Hampshire, while Richie Ross ran the ill-fated Cruz Bustamante for Governor effort (which ran aground after Ross had the brilliant idea of accepting a $2million contribution from a single Native American tribe in a single donation, and then worsening the problem by claiming it was not subject to contribution limits).

The usual suspects are rounded up for campaigns because they are seen as the best at what they do. Or it could be, as is evidenced by the only three (!) African-American head football coaches among the 114 Division 1 colleges, that a good old boy network controls the hiring of key campaign personnel.

As activists spend the next weeks and months debating new strategies for winning elections, we should examine whether white male political consultants maintain too great a role in our framing of political messages. Its interesting that both Peggy Noonan and Karen Hughes played major roles in communications for the national Republican Party, but women are absent from the message development wing for the Democrats.

Villaraigosa may be correct in turning to Ace Smith to out-macho and out-mudsling his opponents, but history shows that progressives rarely win bully-boy fights.