Local Organizing and the Drive for Progressive Change 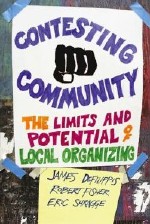 When I was writing The Activist’s Handbook, I read many books on organizing and activism. Robert Fisher’s, Let the People Decide: Neighborhood Organizing in America was among the best. Unlike many books that become uncritical cheerleaders for activism, Fisher echoed my own belief that understanding the problems, limits and mistakes in community organizing is critical to winning progressive struggles. Now, Fisher has written a new book with co-authors James DeFillipis and Eric Shragge that revisits many of his earlier arguments. The book’s agenda is clear from the title, Contesting Community: The Limits and Potential of Local Organizing. The authors’ conclusions about the limits of local organizing in a world where communities are increasingly impacted by national policies confirm Fisher’s prior work, but deserve renewed focus. Contesting Community is not a starry-eyed or misleadingly optimistic book, and given the ongoing limitations of community organizing over the past decades, its honesty is appreciated.

The authors wrote the book because, “we had witnessed the marginalization of the longer term goals of economic and social justice as part of the agenda of community organizing. In its place, we see a narrower focus on much more limited practice … We thought a book that broadly examines the direction of community practice would answer the question of why this has happened and what other possibilities exist.”

The book is too short (under 200 pages) to fully achieve this ambitious goal, and its omission of struggles west of Chicago means California’s often path setting struggles are not part of its analysis. But I suspect this book is for people already familiar with a wide range of community organizations and local organizing campaigns, and who can apply the authors’ analysis without reading specific case studies.

The Lack of Political Education

If I had to point to the single biggest issue for Fisher in his prior book and for the new work as well, it is that community organizations too often fail to provide political education for members, staff and leaders. As the authors describe, “Building power for the long term requires informed and critical leaders and members / participants within the organizational framework.”

Fisher has been quite critical of neo-Alinsky organizations for failing to educate members on the long term view, and notes that ACORN in its heyday, for all of its success, was also limited by the need to have a “front burner” issue. Organizers become too busy on campaigns that have little connection to larger social or economic justice issues, as the need to constantly engage in “winnable fights” leaves highly skilled staff working on small-scale struggles.

The authors of Contesting Community understand why larger agendas are submerged if not forgotten. They know the funding realities, and the powerful obstacles to local groups achieving the resources necessary to wage battles for major change. They contend, however, that organizations that imbue their leadership with a broader policy understanding are more likely to see the big picture, and work on campaigns directed toward greater social and economic justice.

I began running the nonprofit Tenderloin Housing Clinic at that early, hopeful stage for community organizations. Over the past thirty years, I have seen first-hand the transformation of most non-profits into groups that not only do not challenge the political status quo, but are not propelled by any ideology to even desire to do so. I once suggested to a top staffer in a non-profit housing group that it should educate their tenants about the need to fight to save SRO’s (single-room occupancy hotels), and he replied: “we don’t believe in indoctrinating our tenants.”

That’s exactly the tendency Fisher and his co-authors seek to change.

The Demise of Community Organizing

Contesting Community does not discuss the rise of organizing through the Internet, or the work of groups like MoveOn, the Courage Campaign and Democracy for America that combine online mobilizing with bodies on the ground. Nor does it address the local organizing that emerged during the Obama campaign, and that increasingly is involved with national elections.

I mention these omissions not because it weakens the authors’ critique of traditional community organizations, but rather because it appears that those with a broader political agenda are steadily shifting away from local groups to these other entities. While Fisher and his colleagues are trying to make local groups more politically effective, many activists have given up trying to improve these organizations and now work with local chapters of national groups seeking to make progressive change.

The demise of ACORN says a lot more about the deep crisis for community organizing in the United States than some progressives want to hear. The truth is that ACORN did not get the foundation support it deserved after its path-breaking voter registration work in 2004. Nor did funding entities line up to subsidize the organization when it engaged in precisely the type of national campaigns against predatory lenders and other big targets that the authors describe and endorse.

Unfortunately, funders are far less likely to support community organizing that pursues the broader social change agenda that Fisher, his co-authors and most progressives urge. And considering that these organizations cannot financially survive from donations by individual members (ACORN’s door-to-door canvass did not primarily fund its operations, and fell off during tough economic times), a viable economic model for visionary social change community organizations is lacking.

The result is that less than two years after Barack Obama’s election of the first “community organizer” President, funding for organizing has never been more scarce. It is no exaggeration to say that the very future of the community organizing model discussed in Contesting Community is at risk.

Let’s hope that the book fosters an influx of new resources to local organizations that do educate their staff, work for greater social and economic justice, and otherwise follow the authors’ thoughtful recommendations.