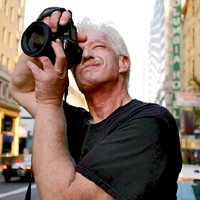 I first met Mark Ellinger in 2002, when he lived in a residential hotel on Sixth Street. I invited him to join the Central City SRO Collaborative, where he proved himself an effective tenant activist. But it was Mark’s hobby as a photographer where he truly thrived, and for years his pictures of the neighborhood SRO’s have been displayed at various art exhibits – from Chris Daly’s Office at City Hall to the Tenderloin/North-of-Market Community Benefit District. Now, Mark has finished a three-volume book set of his photography called Up From the Deep – covering Sixth Street, Mid-Market and the Tenderloin. The first two volumes are now available for sale online, and the third will be released later this year. As the district’s historic designation sparks a renewed interest in the surrounding area, Up From the Deep offers a valuable contribution to denizens and visitors alike – told with deep appreciation from the perspective of a long-time resident.

“Of the three volumes that comprise Up from the Deep,” explains Ellinger, “Part One is the most personal, as it grew from and is centered on my experience of living for five-and-a-half years in a Sixth Street SRO.” Often described with disdain as “Skid Row” by many San Franciscans who choose to avoid it, Sixth Street is a residential neighborhood for over 1,000 SRO tenants – many of whom establish firm roots in the community.

“Social and cultural conditioning have created prejudicial blind spots in the way people think about Sixth Street,” writes Ellinger. “In fact, most people wish Sixth Street would just go away. The only way to learn about the history of Sixth Street, and to acquire an understanding of the people who live and work there, is to immerse oneself in the neighborhood – something very few people care to do.”

Most of Volume One includes various shots of the Sixth Street neighborhood, often taken from the fire escape outside Ellinger’s old hotel room at the Shree Ganeshai. He also dedicates several portions of the book to the interior of a tenant’s hotel room, giving outsiders an eye-opening view of the habitability conditions those living on the edge of homelessness struggle with every day. Ellinger intersperses his photos with anecdotes about the personalities who grace life on Sixth Street, in a way that only a local truly can.

Ellinger combines contemporary shots of the Edwardian hotels that line Sixth Street today – with black-and-white images of the neighborhood from fifty years ago. Despite a few glaring differences (Ellinger’s research shows that a hotel room in 1952 would rent for 50 to 75 cents a night – versus $500/month today), what’s striking as you compare the photos is how little has changed – and how attitudes about Sixth Street by outsiders remain the same. The SF News-Call Bulletin, for example, dismissed Sixth Street in 1952 as a “wino district.”

Throughout Volume One, Ellinger’s writing and photography demonstrates a clear love for Sixth Street and the people around it. “For all its problems,” he writes, “Sixth Street has an unquenchable vitality. The day may be cold and rainy or warm and sunny, but the activity on the street remains constant.” Not only will reading Volume One give pride to those who know and appreciate Sixth Street, but it will help outsiders understand it better.

It’s easy to appreciate Volume One if you know Sixth Street, and it’s reassuring to see the neighborhood finally get its just acknowledgements. But Ellinger’s Volume Two on Mid-Market is an educational experience for even those familiar with the area, which spans from Fifth to Tenth Streets. Likewise viewed as a blighted neighborhood, it’s easy to walk by without thinking about what lies inside its scores of abandoned buildings.

Volume Two could surprise you that there’s more than meets the eye. We all know what Mid-Market once was – a thriving theater district that was the entertainment capital of the Bay Area. Ellinger includes archival photographs of such landmarks like the old Fox Theater, demolished in 1963 and replaced with Fox Plaza. And when BART started digging a hole into Market Street for a whole decade, the neighborhood declined. But today, what’s behind mid-Market’s pawn shops, strip clubs and tawdry storefronts?

The answer may surprise you. The sides of the Golden Gate Theater along Taylor Street, which are now unused, once housed colorful theater-related storefront businesses – now vacant space that could easily be re-rented. The boarded-up St. Francis Theater at 965 Market Street (slated to be demolished to build a shopping mall) was built by famed architect John Galen Howard, and is still remarkably intact on the inside. Even the office building at 942 Market Street once housed the Pix Theater – a small “shooting gallery” theater that now houses a Subway on the first floor.

Ellinger shows that Mid-Market is not just about old relics of the past like the Fox Theater that only exist in memories. The area also has under-utilized pockets that could be used to revive the neighborhood. While less personal than Ellinger’s account of Sixth Street, Volume Two gives the reader pause about what Mid-Market used to be, and the risk of demolishing old theaters.

Volume Three (the Uptown Tenderloin) will be available later this year, which Ellinger says will be more comprehensive than the other two. Readers won’t be disappointed.