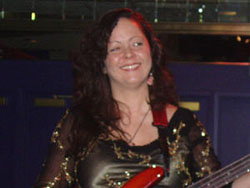 Laurie Jean “LJ” Lawrence, bassist of the Reno/Lake Tahoe groups “Cool Black Kettle”, and her own “Sierra Blues Tribe”, was found murdered Saturday morning in Reno, Nevada, the apparent victim of a dispute with her ex-boyfriend. Reno police arrested Denver Dean Pullin, 44, of the same address, and booked him into the Washoe County jail on suspicion of murder with the use of a deadly weapon. Authorities did not specify when they found the body or where the body was found at the home. Detectives will not release the cause of death until after an autopsy which was scheduled for Sunday. Officers discovered the body while responding to a report of a suicidal person at the residence.

LJ, had been bringing great blues to the Bay Area, Reno and Lake Tahoe, for well over a decade. One of the hottest female bass players on the scene today, she was a wonderful singer and front person, bringing energy and enthusiasm to the stage, while sharing the limelight with a talented and creative band. Her first recording, a collection of songs she wrote and recorded with acclaimed guitarist and long time music partner, Don Evans, was entitled “Heart Of The Tribe.” Ranging from full-force funky to hauntingly introspective, their CD embraced open-souled expression while showcasing her unique talents.

Originally from the East Coast, LJ came to Reno from the San Francisco Bay area where she’d been the bass player for the Bay Area Blues Society out of Oakland, CA, backing up artists such as the late greats Bobby Day and Cool Papa, as well as playing with what was to evolve into the Caravan Of All Stars. Previously a guitar player and more of a rocker, she’d always enjoyed the blues, but developed a deep appreciation of the blues audiences and tradition in the Bay area. LJ studied privately and majored in music at Laney Community College and the Contra Costa System where she studied with D’Amante and pianist Ed Kelly and received an Associate Degree. She toured Japan, Korea, Canada and the Western United States playing a wide range of music with various bands before landing in Reno.

There, her band initiated the original jam sessions at the old Hacienda in 1991 before she left to tour Alaska. Seasoned guitarist Evans wound up in the Hacienda’s house band while she was gone. Upon returning, she and Evans teamed up, and together reformed a group which evolved into the Sierra Blues Tribe. The two also formed a hardworking commercial band and played all kinds of music. During this time period, Evans and LJ were inseparable, working six and seven days per week, and offstage, working up harmonies, exchanging music, going to shows, stockpiling equipment, backing up other artists, and both were very involved with different aspects of the music community. In addition to playing countless clubs, festivals and concerts, the Sierra Blues Tribe continued to host one of the most successful jam sessions in the region.

Largely defined by musical camaraderie and love of the blues, the band was influenced by the variety of musicians they came in contact with as well as their own diverse taste. In addition, Evans, already a successful recording engineer in Los Angeles and Reno, was still involved in mixing projects and doing live sound. This contributed to the band’s already eclectic mix. One night, while Evans was recording some tracks for Kim Wilson’s “That’s Life” CD, Wilson took a break and demonstrated harmonica techniques for the two of them while discussing his Texas musical days. “Baby, Please,” a song from “That’s Life” remains one of Evan’s signature covers. LJ & Evans also became fans of the group, the Subdudes, after hearing a broadcast over Idaho while on the road. Back in Reno, Evans was actually hired to mix the band at their Hacienda concert and ‘All the Time in the World’ turned up in their repertoire.

Considered by many, one of the most sought after and respected female bassists in the area, LJ’s recent and victorious battle with thyroid cancer, makes her untimely death, all the more tragic. Her voice had returned, and her bass playing was better than ever. LJ’s heart, and the warmth she displayed both on stage and off, was a rare commodity in today’s music world. Her death sadly, is another in a long line of absolutely senseless crimes against women. LJ was one of the most beautiful and sensitive persons I have ever known, a true friend, and a fantastic bassist. I will miss her terribly.

E. “Doc” Smith is a musician and recording engineer who has worked with the likes of Brian Eno, Madonna, Warren Zevon, Mickey Hart, Jimmy Cliff, and John Mayall, and many others. He is also the inventor of the musical instrument, the Drummstick. He can be reached at edocsmith@comcast.net