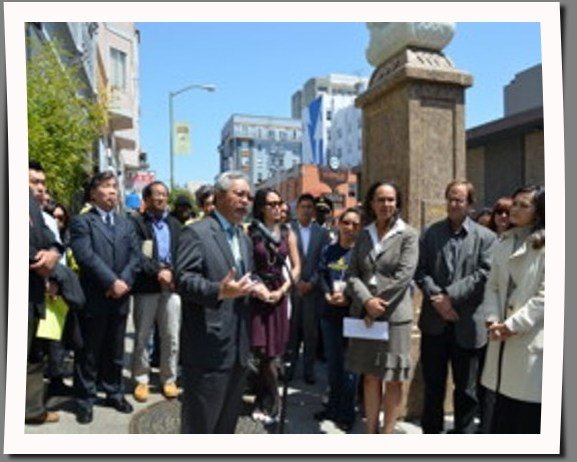 The Tenderloin’s Little Saigon district (Larkin between Eddy and O’Farrell) had a bounce back year in 2015 and its future is bright. All of these positives occurred this year:

*The Mayor’s Office approved $35,000 in funding for new lighting on Little Saigon to increase evening business;

*The Chairman (best known for its food trucks) finally opened its retail space at 670 Larkin in the heart of Little Saigon;

* A long rundown building at Ellis and Larkin was painted.

*Lers Ros is adding two new locations in Little Saigon, including a new bar at the long vacant space across from its restaurant once occupied by Olive;

* La Voz Latina and the Lower Polk CBD have combined forces to get a monitor to stop drug dealing around the toilet at Little Saigon’s northern O’Farrell border;

*Emperor Norton’s Boozeland at the block before Little Saigon is booming offering the pre-dinner drinks that the area otherwise lacks.

I cite these examples because they completely refute the SF Chronicle’s December 8 story, “Tenderloin’s Vietnamese restaurant core faces extinction.” It’s hard to find imminent “extinction” when none of the core Vietnamese restaurants in Little Saigon closed in 2015. And when existing businesses like Lers Ros are expanding in the area. Based on my observation of the lunch time crowds, many are busier than ever.

Why did food writer Jonathan Kauffman get the Little Saigon story completely wrong? It’s not because he did not have accurate information. The Mayor’s Office of Economic and Workforce Development, which has devoted significant resources toward revitalizing Little Saigon, gave Kauffman the facts but he chose to ignore them.

For example, Kauffman ominously writes that “Golden Era Vegetarian and Turtle Tower have been forced to move.” Readers will be surprised to learn that both remain in the Tenderloin.

Golden Era was never in Little Saigon. After their O’Farrell Street landlord refused to renew the lease, they relocated to Golden Gate and Larkin where they are much busier than in their prior location. The Mayor’s OEWD provided roughly $30K for Golden Era’s storefront door and signage at the new location. It also helped the business to secure a 10 year lease with two 5 year options.

Turtle Tower responded to a rent increase at their longtime Little Saigon location by buying a building a few doors down. The space is far better than what they had before and their former space is occupied by another Vietnamese restaurant.

Instead of looking at all the facts, Kauffman based his claim of “extinction” on the closure of four Vietnamese businesses over a period of years. He does not state the reason for their closure, or provide any evidence that this was caused by a threat of “gentrification.” I know the back story on one of the four mentioned and most of its revenue came from slot machines.

Restaurants open and close in good times and bad. New owners often impose rent hikes regardless of improvements to the surrounding area, as occurred with Turtle Tower, who got a steep hike during economic down times in the city.

The truth is that the Tenderloin has maintained a surprisingly large number of Vietnamese restaurants despite the steady shrinking of the neighborhood’s Southeast Asian population. If you are going to operate a restaurant serving the same type of food as well established competitors like Bodega Bistro (607 Larkin), Pho 2000 (637 Larkin) and many more, you better have something distinctive to offer (like the Chairman does).

Kauffman told me in an email that he talked to a lot of Vietnamese restaurant owners in the Tenderloin and they are all “feeling the pinch of gentrification.” But that’s the risk of relying on personal anecdotes over facts and one’s own perceptions. If you look at where many of  these businesses are concentrated outside of Little Saigon—like the south side of the 400 block of Ellis between Leavenworth and Jones—there is not only not a “pinch” of gentrification but most would describe that stretch as extremely rundown.

If Kauffman’s article had come out a year ago, I would have echoed his concerns about Little Saigon. Not because of a risk of gentrification and displacement of Vietnamese restaurants, but rather because the area was besieged by problem street behavior that was killing night business and reducing lunch customers.

But Little Saigon dramatically rebounded in 2015. The many new businesses slated to open reflects this positive change.

There are some structural obstacles to increased nighttime success in Little Saigon that have yet to be completely overcome. One is the absence of popular bars as an entry point to a later dinner. The nearest bars,  Boozeland and the Gangway, are just outside the area.

Another obstacle is the nearby state and federal buildings that are closed at night and which create a wind tunnel for those approaching Larkin from the west. Reaching Little Saigon from Mid-Market also requires walking past empty public buildings at night, a problem not encountered in nearby Hayes Valley or SOMA.

But Little Saigon turned a corner in 2015. And its future has never been brighter.

Randy Shaw is Editor of Beyond Chron. He writes about the impact of Southeast Asian immigration in the Tenderloin in his new book,  The Tenderloin: Sex, Crime and Resistance in the Heart of San Francisco