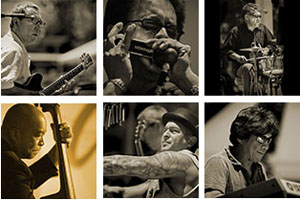 Last October, I was treated to some stellar performances at the Asian Art Museum celebrating Filipino History Month. One of the artists that caught my eye was the phenomenal Carlos Zialcita on harmonica and his trio Little Brown Brother. Joined by guitarist Chris Planas and bassist Ben Luis, Little Brown Brother brought down the house with their blend of Filipino tinged jazz and blues. Today at Noon, Little Brown Brother will bring their full sextet, (Bo Razon, guitar, Mike Ferando on drums, Imanual Junedy on piano and Mio Flores on percussion), to the Cadillac Hotel during their month long concert series to benefit for the victims of the Haitian earthquake. With musical influences from the rich African-American traditions of jazz and blues; Latin jazz, salsa, boleros, and Brazilian sambas and bossa novas, Little Brown Brother’s sound artfully incorporates indigenous Filipino music and instruments as well as Spanish-influenced traditional songs.

Little Brown Brother was formed in the summer of 2006 by Luis and Zialcita. It takes what both of them have been doing individually and collectively and creates a new package designed specifically for the Filipino audience. The nucleus of this ensemble is a quartet, with the addition of Chris Planas or guitar and Mike Fernando on drums. While the rich African-American traditions of jazz and blues remains at the core of what this group represents musically, there are many other influences that add flavor to the mix. There is a definite worldbeat texture and attitude to the music – borrowing from the indigenous Filipino music and instruments and the heavily Spanish influenced traditional Filipino music of the Philippines.

The origin of the term “Little Brown Brother”, was used by Americans to refer to Filipinos during the period of U.S. colonial rule over the Philippines, following the Treaty of Paris between Spain and the United States, and the Philippine-American War. The term was also coined by William Howard Taft, the first American Governor-General of the Philippines (1901-1904) and later the 27th President of the United States.

The term was not originally intended to be derogatory, nor an ethnic slur; instead, in the words of historian Creighton Miller, it is a reflection of “paternalist racism”, shared also by Theodore Roosevelt. Taft told President McKinley that “our little brown brothers” would need “fifty or one hundred years” of close supervision “to develop anything resembling Anglo-Saxon political principles and skills.” “Filipinos are moved by similar considerations to those which move other men.”

The phrase “Little Brown Brother” drew some sneers from both Americans and Filipinos, however, due to the bloodshed of the Philippine-American War. U.S. attacks in the Philippines reportedly included the burning of entire villages and the concentration of civilians into concentration camps; Filipinos taken prisoner by Americans were reportedly interrogated using the water cure. American soldiers taken prisoner by Filipinos were reportedly tortured and their bodies mutilated. Although the United States government declared the “insurgency” that was the Philippine-American War over by 1902, guerilla resistance movements against the American occupation continued until 1913.

In addition, the band incorporates different elements of Latin music including latin jazz, salsa, boleros, and of course, a variety of Brazilian rhythms. In addition to regular performances throughout the Bay Area, Little Brown Brother has performed at a number of events in the Filipino community – including the Manilatown Heritage Foundation 1st Annual Banquet in 2007, the 87th Annual Dinner of Gran Oriente Filipino, the 2007 Pista Sa Nayon in Vallejo, the 2007 Bindlestiff Theatre Black and White BindleBall, and a benefit concert for Sugar Pie DeSanto held at The Manilatown Center in San Francisco. Little Brown Brother’s debut recording – “Soul Shadows” is available on CD Baby, mail order and at performances. It’s available on iTunes, PinoyTunes, UbeTunes, and Amazon.

I’ve seen and worked with some incredible harmonica players in my day, Jean “Toots” Thielemans and Howard Levy, just to name a few. If you want to see one of the Bay Area’s best, hop down to the Cadillac, catch Zialcita and Little Brown Brother and donate to a worthy cause, the people of Haiti.