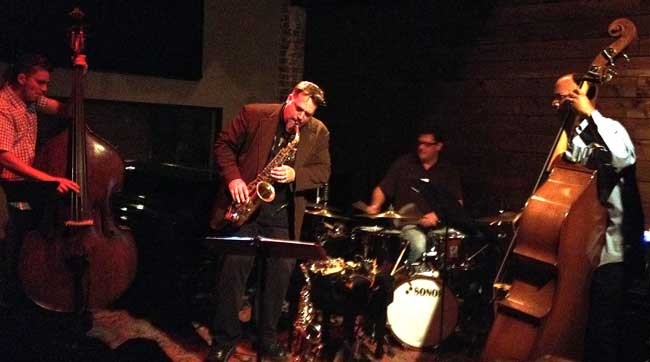 Life’s Blood “damn well rock their Jazz” says blogger disaster amnesiac, while exploring the influences and inspirations that make the art of jazz and improvisation timeless. The ensemble pays tribute as well as brings to light, reinvents, deconstructs, and breaths life into the deeper realms of their collective body of memory. Originally created by saxophonist Rent Romus while on tour in Northern Europe in 1999, the group currently features drummer/percussionist Timothy Orr along with a cast of guest performers from the local San Francicsco scene. Romus and the LBQ roll into Bird & Beckett Books in Glen Park this Sunday.

Hailed by Downbeat as having “…a bold sound, unmistakeable sincerity and conviction”, Rent Romus is a force spanning over 25 years of music production curating over 80 shows a year for the new music, avant garde, and jazz communities as well as leading several groups from rollicking jazz to free abstract chamber music, to sounds tracks for film and dance. Timothy Orr studied drums with Edward Blackwell from 1985-89 at Wesleyan University. Timothy has played with musicians in many fields, including Josh Roseman, Stephen Schwartz, Marco Eneidi, Richard Hell, Adam Lane, and many more.

Word is Law, all life is vibration, and intention dictates experience. These words have shaped and guided the artistic and creative maturation of Amber McZeal over the past decade. Beginning in the swampy halls of New Orleans, Amber began her journey under the tutelage of Mr. Ellis Marsalis and Leah Chase, studying jazz vocalization. Her passion for harmony and humanitarianism led her down a path of scientific inquiry: an inter-disciplinary intersection of neuroscience, quantum theory, and acoustic art. Amber has recently received her Bachelor of Arts with a focus on vibrational theories and sacred intellectualism. Her current body of work, Mudzimu, is a combination of original music compositions and cultural, futurist mythos that is committed to expanding the discussion of trauma, life and identity from the purview of matter as vibrating energy. Amber is currently a Ph.D. student at Pacifica Graduate Institute, and resides in Oakland.