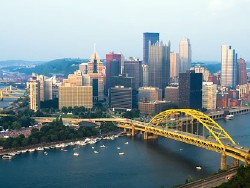 Today marks the first day of the annual Netroots Nation Convention, held this year in Pittsburgh, Pennsylvania. I am attending the Conference, and will provide back-to-back coverage on Beyond Chron for the next four days – along with Pittsburgh resident Hannah Dobbz. With Barack Obama in the White House and a sixty-seat majority in the U.S. Senate, there will be lots of talk at the Convention about holding Democrats accountable – and passing health care reform. Ex-President Bill Clinton will deliver the Keynote Address, and Dr. Howard Dean – the blogosphere’s patron saint – will have a town hall on health care. Obama adviser Valerie Jarrett will be there – and because Pennsylvania has a Senate race next year, we’ll have a live debate between new Democrat Arlen Specter and his primary challenger, Joe Sestak. The Conference will also have 20 workshops and 70 panels – including a panel on Local Blogs, where I will have a discussion with bloggers from Chicago, New Orleans, Philadelphia and Maryland about the challenges of blogging city and county government to empower activism.

This is the fourth annual “blogger convention” – and my third one. Two years ago in Chicago, the issue was challenging our Democratic Presidential candidates – where I got to ask Hillary Clinton a tough question. Last year in Austin, Barack Obama was the party nominee – and winning in the fall with a progressive mandate was key. Now, bloggers have helped fuel two back-to-back election cycle victories – but the challenge is to enact a legislative track record to undo the last 40 years of conservative rule. First and foremost is universal health care.

I am not very excited that Bill Clinton will be tonight’s Keynote Speaker – because to me the 1990’s were a wasted opportunity, where progressives had a brief window of time to enact change and failed miserably. I’m curious to hear what he will say about avoiding pitfalls to get health care reform, but a better answer will come tomorrow morning from Howard Dean – who is leading the effort against Blue Dog Democrats who have sold out to the insurance industry. In the end, it will take real organizing at the grass-roots level to pass a public option by the end of the year.

For progressives, the biggest headache is the U.S. Senate – where Democrats finally got 60 votes, but Majority Leader Harry Reid still can’t pass EFCA or health care reform. Pennsylvania Senator Arlen Specter switched parties because right-wing Republicans wanted his hide in 2010, but he’s proven to be one of the “weak links” that are making things difficult. Congressman Joe Sestak is challenging him for the Democratic nomination, and we will have a live debate tomorrow. Netroots Nation is hostile territory for Specter, but there are also questions for Sestak – who is having a breakout session right after the debate.

But national politics is not the only focus. Pittsburgh was chosen because of its “green” reputation, and there is a panel today about the strides it has taken. The future of New Orleans after Katrina is also on the agenda, and I hope to meet housing activist and mayoral candidate James Perry. Bloggers at Calitics have a panel on the California budget crisis, and our state’s dysfunctional process. And we have a panel this morning on Proposition 8 and the movement for marriage equality. Netroots Nation always gets a disproportionate number of Californians who are into national politics – now is the time to get them involved in state issues.

On a personal note, this will be my first year as a speaker – on a panel tomorrow about blogging local government. Dan Urevick-Ackelsberg of Young Philly Politics, Josh Kalven of Progress Illinois, Eli Ackerman of the New Orleans blog We Could Be Famous and Evan Coren – who parlayed his blog activism to win a City Council seat in Maryland – will join me in a talk about empowering activism. I plan to report on the work Beyond Chron did to analyze the San Francisco budget. Our panel will not be live-streamed, but I will link to the video when it becomes available.

Stay tuned for more reports as they become available …