Lessons of the UNITE HERE-SEIU Deal 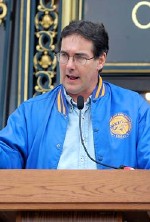 The July 26 settlement between UNITE HERE and SEIU ended a divisive conflict that badly hurt the labor movement. It hindered cooperation between SEIU and the AFL-CIO, and divided labor activists and unions. Millions of dollars were squandered over Bruce Raynor’s tantrum at being denied the right to be an international union president for life. While the agreement paves the way for closer cooperation around immigrant rights and November’s elections, the once close relationship between SEIU and UNITE HERE is unlikely to be restored anytime soon, if ever. Ultimately, the deal reminds the entire labor movement that grassroots and worker power, not high-priced consultants, robocalls and mailers, is the key to success. The SEIU-UNITE HERE conflict also shows the peril of veteran labor leaders quietly deferring to destructive decisions by top union officials, a lesson that was supposed to have been learned from activists’ experience with Cesar Chavez and the UFW in the 1970’s.

By my analysis, UNITE HERE got everything it had long asked for from the SEIU settlement. John Wilhelm always insisted that UNITE HERE had no designs on the UNITE-owned Amalgamated Bank – a claim also made by Andy Stern, whose former union nevertheless ended up with it – and that he simply wanted UNITE HERE made whole.

How many times does the labor movement have to prove to itself that grassroots organizing and building worker power overcomes campaigns relying on big money, paid staff, and consultants? UNITE HERE’s success should provide the current generation of labor activists with an indelible message about how to win large-scale campaigns.

Fred Ross, Jr. worked for SEIU for ten years, leaving soon after the international placed SEIU-UHW in trusteeship in January 2009. Ross’ May 7, 2009 piece SEIU President Andy Stern Has Crossed the Line compared SEIU’s attacks on UNITE HERE to the Teamsters war on the UFW in the 1960’s and 1970’s, and may have been the single most influential analysis of the SEIU-UNITE HERE dispute.

Ross now sees a connection between UNITE HERE’s success and SEIU’s still ongoing battle against NUHW in California. According to Ross, “this historic victory is a timely story of hope and inspiration for thousands of NUHW supporters at Kaiser Hospitals across California. These workers will soon be voting to reclaim a voice in their workplace and their union in their David vs. Goliath struggle against SEIU to be settled at the ballot box.”

NUHW President Sal Rosselli saw a similar message in UNITE HERE’s reliance on worker power: “NUHW applauds UNITE HERE reaching an agreement to protect their union. UNITE HERE is an inspiration for all of us at NUHW also fighting to win back our union.”

I asked UNITE HERE Local 2 President Mike Casey if he saw the major influx of money as impacting the hotel workers long contract fight with the global hotel industry. Casey said, “We were confident of our position before the settlement, and more resources will make it easier for us to outlast the hotels in this fight.”

Casey did not think the prospect of an SEIU settlement and millions of dollars coming to UNITE HERE was on the hotel owners’ radar: “The hotel industry is comprised of some pretty clueless decision makers. They turn over so much that they don’t learn from history, and make the same mistakes over and over again.”

Casey was excited about the prospects of hiring additional organizing and boycott staff. He believes the SEIU settlement will “allow us to expand our pressure on the hotels in many different ways.” UNITE HERE leaders in the 15 cities where hotel contract fights are continuing could make the same point.

Much as I would like to accentuate the positive lessons of the unions’ deal, the fact remains that the SEIU Executive Board sat quietly by while Andy Stern, Bruce Raynor, and SEIU 32 BJ leader Mike Fishman cooked up a hostile takeover plan of UNITE HERE that made no sense. These leaders, which include current President Mary Kay Henry, either felt that publicly challenging Stern would risk their own positions or that even such momentous decisions were totally the President’s call.

This may be the most distressing lesson of all for the labor movement.

SEIU Executive Vice President Eliseo Medina has regularly spoken out in recent years about his regret at not challenging the abuses of Cesar Chavez in the 1970’s when he served on the UFW Executive Board. But when he had the chance to publicly speak out against Stern’s raids against the union that Medina was most closely aligned with, he remained publicly silent.

Medina did not speak out even when Stern’s attack targeted UNITE HERE President John Wilhelm, who worked hand in hand with Medina to change AFL-CIO immigration policy at the 1999 Los Angeles Convention.

Nor was Medina motivated to speak out by SEIU’s attack on the union that boosted the career of Medina’s close friend and ally, the late, great labor leader Miguel Contreras. Contreras would be turning over in his grave if he knew that SEIU had attacked Contreras’ beloved UNITE HERE, and that his longtime ally remained publicly silent.

I focus on Medina solely because he has so frequently cited his regret over not speaking out against Cesar Chavez’s refusal to give workers power over their union, and the UFW leader’s unilateral removal of key UFW volunteers from the union. If someone of Eliseo’s background did not feel safe publicly challenging Andy Stern, there was no way anyone else on that Executive Board would do so.

This does not speak well of union democracy, or of labor unions as a place for vigorous debate. And it is not at all clear that SEIU has learned from the steep price it paid for the UNITE HERE fight, both financially and in its loss of status in the progressive community.

SEIU’s top Executive Board remains as unrepresentative of workers as that of the UFW Board that so troubled Medina and other UFW activists. There are no former janitors, health care workers, home health care workers, or anyone from the professions that SEIU represents.

Ex-farmworker Medina is the most representative of all, and he has been a fulltime organizer – not a farmworker – since the age of 19.

Upwardly mobile careerists are not the ones most likely to keep an out of control leader in check. And as long as unions fill their Executive Boards the way Corporate CEO’s fill their boards, there is little prospect for the spirited democratic debate that labor unions claim to promote.

Randy Shaw writes about many of the figures in UNITE HERE and SEIU in Beyond the Fields: Cesar Chavez, the UFW and the Struggle for Justice in the 21st Century. Follow Randy on Twitter: @RandyTHClinic