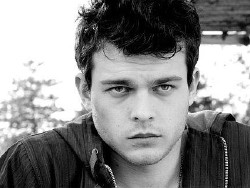 It is unusual for a film to try to downplay who directed the film. Without looking very closely, you would never guess that Francis Ford Coppola wrote and directed this impressive heart stopping triumph. Visually beautiful, Coppola takes us on a strange visit with an Italian family. It’s a real gem, however. It keeps you guessing about whom is who and what is it that makes them tick …

The film is almost all black and white, with touches of color that come in now and then. Usually, flashbacks are the other way around. The color is usually what we see, and the flashbacks show up as black and white.

The cast is exceptional. Vincent Gallo (a brother) is mesmerizing as usual. Playing his brother is newcomer Alden Ehrenreich (Bennie), who is a look-a-like of Leonardo DeCaprio. He is impressive and evocative. And there are many other actors in the film that are Brilliant. They take you through the wringer of life with sympathetic turns of emotions that blast this movie into the heights of one of the most remarkable movies today. Watch out! It’s a surprisingly snap ending!

QUEER ICON – HAVE YOU GOT THOSE BETTE DAVIS EYES?

The Mike Black and Carole Summer’s Movie — “Queer Icon: The Cult of Bette Davies” is a documentary that is built around fabulous Silver Screen clips from many, if not all of B.D’s films. She was the master of Moral Choices, Human Nature and fate. The rising tensions, the Cigarette waving in the air and the fatal face-offs still blow you away. Nothing, absolutely nothing can top Bette coming down from the porch shooting non-stop at a man. And not a hair was out of place. Her scenes were flawlessly put together.

Her image and her drama continue on through a myriad of ‘Male Actresses’ as Charles Pierce always called himself. Actually, like Davis, Pierce will never be topped. He was Bette Davis. Every bone in his body moved like her. He also had those Bette Davis Eyes. For a great story about Charles Pierce, you might want to read “Drags to Riches” by John Wallraff. Available, at “Different Light Bookstore” — and online. Sometimes, shockingly outrageous.

In this fascinating documentary, others featured are Matthew Martin and Arthur Black. Film historians also give their insights to Bette Davis and the whole ‘Drag’ thing. Some of the sequences were filmed in the Castro Theater, and it never looked more enticing. Perfect filming brought out its best.

When Mike Black the producer came over and said — “I hope you like the film?”, I replied, “What is there not to like about Bette Davis?” And I was right. This is a very enjoyable look at Davis. The Gestures, the batting of the eyes and the ever-present Cigarette smoke – is something that you just can’t resist. In my opinion, she is probably the biggest star of the Silver Screen – Ever!

I do hope that more people get to see this documentary. It is very cinematic and remarkable. I’m sure there is an audience out there for it. Queer Icon is a bona fide treat.

$9.99 – THE MOVIE. A STORY ABOUT PEOPLE LOOKING FOR MEANING IN THEIR LIVES.

This stop action film (78 minutes long) has its good things, and some things that could easily have been left out. For instance – I did not like the little 2-inch men that lived with him and made a mess of everything. I know, it was all in his pothead, but I found it very boring.

I did like, however, the little boy and his Piggy Bank. Every time he drank his milk, his father gave him 50 cents to put into his piggy bank. What the boy does with the Bank later when it is full, is one of the most tender and sincere things about this film. The photography is pretty good. Mostly the characters looked like real people, even down to the genitals that one hung hunk reveals. But, the lips on everyone looked weird. I don’t know what it was, but I had a hard time dealing with the lips.

In a nutshell: An employed Lad sends for a book about how to discover the meaning of life. It cost him $9.99 cents. His father has a run in with a street person, who later turns up as an Angel that can’t fly. An older man that lives in the same complex wants to see the Angel fly and pushes him off the roof. Ooops – that was a mistake.

I really wouldn’t suggest that you run out and see this film. But if it ever shows up on the Sundance Channel, I might be a pleasant diversion of 78 minutes.