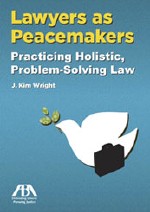 J. Kim Wright is an ambitious woman. In this comprehensive resource manual, she describes dozens of ways in which lawyers, judges and legal workers across the country (and around the world) are attempting to change their profession for the better. The terms sound hopeful – Holistic Law, Renaissance Law, Transformative Law, Law with a Meditative Perspective. Spiritual Law, Law as a Healing Profession, Restorative Justice, Therapeutic Jurisprudence. Most profoundly, as the title reflects, “Lawyers as Peacemakers.”

For Lawyers, For Others

Lawyers as Peacemakers, published by the American Bar Association, clocks in at over 500 pages including appendixes, resources and information about its many contributors. The book includes essays, quotes, interview snippets, profiles and articles written by both Wright and leaders in the various alternative legal processes she explores.

Hopefully portions of the book will be excerpted in publications for the legal profession. Lawyers and legal workers who have never heard the umbrella terms “comprehensive law” and “integrative law” but know something is missing from their day-to-day experiences will no doubt breathe a sigh of relief that alternatives exist. People who have had frustrating experiences with the legal system – as a client, witness, offender or victim, may find an explanation, on a systems level, about how and why their experience fell short.

Other information in Lawyers as Peacemakers, about the basics of mindfulness, time management, or the importance of relationship building for example, could fit well in the pages of Oprah Magazine or Shambhala Sun. In other words, you don’t have to be a lawyer to get something from this book. (Though you will probably want to take the book out of the library – with a $74.95 price tag from the publisher and a $186.65 Amazon re-seller price, the book, unfortunately, was clearly not priced for public consumption.)

This book will be fascinating to anyone who has wondered just how a society would look if its legal system was structured by outside-the-box thinkers. By people who believe that whenever possible, problems are best resolved not with confrontation and games-playing, but with awareness, care, attention, and collaboration.

If you think such an alternative vision is possible, you’ll be glad that J. Kim Wright undertook her ambitious project.

Holistic Law in the Gulf of Mexico?

Reading the book in June, 2010, I couldn’t help but wonder: Would any of these approaches work in what is possibly the biggest legal mess the United States has faced in years – claims relating to the BP Oil Disaster?

The Gulf of Mexico deep water drilling debacle occurred after publication of Wright’s book. One measure of the book’s worth is whether its ideas have a place in rectifying the staggering losses wrought by BP’s malfeasance. Given the cornucopia of suggestions for handling disputes in alternative ways, there is no doubt that Wright would unequivocally say “YES” to the role of lawyers as peacemakers in the Gulf Coast.

First, the author would assure skeptics, as she does in the book, that legal approaches that recognize the whole person, and lawyers practicing law with compassion and a wider perspective, in no way diminish the potential relief available to injured parties.

For example, in the BP drilling disaster, the traditional adversarial perspective of civil law and the processes based on that perspective can provide money to workers who have lost their livelihood and impose penalties under environmental laws. The traditional criminal courts can, and hopefully will, mete out significant punishment to BP decision-makers who cared only about profit, ignoring the needs of people, the underwater ecosystem, and the above-water environment.

Wright would argue that holistic lawyers could and would be equally successful in the realm of money, penalties, fines, and prison time. But this book suggests that alternative legal mindsets and institutions (the paradigm shift the author repeatedly refers to) can potentially provide greater and broader remedies.

If this book is correct, Holistic Justice could provide a space for Gulf Coast residents to speak directly to BP wrongdoers about how the disaster has affected family life, inner life, and relationships with nature. “Creative Problem Solving”, another interdisciplinary approach to lawyering, can potentially help figure out how to address the pain experienced by workers who have lost not just a livelihood, but a way of life passed down for generations. The “problem-solving court movement” could birth an Environmental Court to truly address the root causes of this national disaster.

Lawyers as Peacemakers provides resources to fuel the possibility of a multi-disciplinary approach to the multi-faceted harm caused by BP and its partners.

Lawyers as Peacemakers is not without flaws, but they are flaws that can be overlooked given the ambitious project Wright has attempted. Wright operates a website at www.cuttingedgelaw.com and often the book feels like a website reluctantly forced to take its place between covers of a book. Or maybe it’s natural when reading a 500+ resource volume to long for links, headings and subpages. (Wright herself encourages skipping around her book, announcing early on that the book was not designed to necessarily be read from cover to cover.) Many pages are cluttered while others have too much white space, and I was hungry for more real-life stories and less theoretical musings.

Still, the book is important, potentially mind altering, and even dare I say exciting. Women and men all over the country are trying to humanize the justice system through both personal change (listening skills anyone?) and systemic institutional creativity. If this book were required reading for all first year law students – and their professors – just imagine how the legal system could really change.

This review would not be complete if I did not admit my biases towards the theories espoused in this book. For one thing, I’ve attended four meditation retreats for lawyers organized by the Law Program of the Center for Contemplative Mind in Society, a group (along with many others) referenced in the book. The retreats, held at Northern California treasure Spirit Rock Meditation Center, are part silent meditation and part structured conversations that try to get at the heart of what it means to practice law with a “meditative perspective”. I heartily endorse both the perspective and the retreats.

My other bias stems from the way I practice law. While I have been a lawyer for almost thirty years, for the past fifteen of them, I have not had to file a single lawsuit. Instead of litigation, I have helped to develop “Structured Negotiations,” a collaborative method of resolving claims – especially those involving access by the blind community to information and technology – that focuses on solution, information sharing, and participation of people with visual impairments. Structured Negotiations have been used to negotiate national settlements about accessible information and technology on behalf of the blind community with some of the largest companies in the United States.

After reading this book, I think I’m going to start saying that I am a practitioner of Holistic Law. As the book recognizes (and as I’ve told people for years), a holistic approach is not about being ‘nice’ or touchy feely. It’s about “having a few more tools in one’s toolkit beyond the solitary hammer of litigation.” As they say, when all you have is a hammer, everything starts to look like a nail.

Lainey Feingold is a disability rights lawyer in Berkeley California. She can be reached through her website at http://lflegal.com.