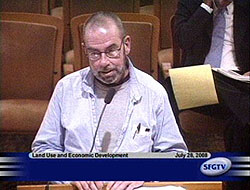 Starting in the early 1990’s, it became a familiar story: big landlord groups threatening to oppose a critically needed construction bond unless the Board of Supervisors let them charge even more money to tenants. The Board long resisted these threats, and voters passed bond after bond. In contrast, when the Willie Brown administration granted landlords special rent passthroughs for a bond measure to construct a new De Young Museum, tenants fought the bond —which went down to an unexpected defeat. To avoid further conflicts, Supervisor Tom Ammiano sponsored a measure that appeared to finally resolve the bond passthrough issue. But now with the SF General Bond heading to victory, the landlords see a new opportunity to extract concessions. In this case, it is legislation sponsored by Supervisor Alioto-Pier that makes tenants pay increased water costs, which comes before the Board’s Land Use Committee on October 1. History shows that if the Board wants to ensure the hospital bond’s defeat, it should cave in to the landlord demands.

It’s Déjà vu All Over Again

Landlord threats to oppose Proposition A, the $887 million SF General Bond, by linking it to a completely unrelated measure involving water passthroughs gives me an acute sense of déjà vu. I spent considerable time in the 1990’s convincing Supervisors not to accede to such blackmail, particularly when the Jordan Administration tried to sabotage the construction of a new Main Library by changing the rent law so that landlords could pass on all the bond costs to tenants.

Tenant advocates argued then that there were a lot more tenants than landlords who vote, and that alienating tenants to avoid the risk of landlords spending money on anti-bond mailers was politically foolish. We got to prove this point when Mayor Brown and the Board sought to make tenants bear an undue share of the cost of the 1998 De Young Museum bond; tenants defeated the measure, despite it receiving every major endorsement and with anti-bond forces being outspent by over 100-1.

Advocates have also long argued that many big landlords do not want to bear any cost for public improvements in San Francisco, and prefer that bonds fail. Since they do not want a new library or public hospital built, why not demand concessions that ensure the defeat of such projects?

I wrote about Alioto-Pier’s misleading water passthrough legislation after it came before the Land Use Committee on July 28. Ted Gullicksen of the San Francisco Tenants Union and other speakers described the legislation as a rent increase measure masquerading as helping water conservation, a characterization the Supervisors did not refute.

There is an eerie parallel between landlords’ longstanding and erroneous claim that it was not fair for tenants to avoid paying the costs of general obligation bonds and this push for new water passthroughs. In both cases, the city’s rent law already provided landlords with a procedure for passing through such costs.

In the case of bonds, landlords had the right to passthrough these increased costs from the earliest version of the rent law in 1979. Similarly, landlords already get compensated for water increases through both the annual rent increase, and the operating and maintenance passthrough.

But why let facts get in the way of attempted blackmail? We all know that San Francisco landlords are barely scraping by these days, and it’s a wonder that they are not demanding a financial bailout in exchange for not opposing the SF General bond.

Since only Ammiano was on the Board when most of the tenant-landlord bond battles were fought, let me remind his colleagues of three points we argued then:

First, landlords cannot defeat bonds. In fact, they have never defeated a bond.

Second, tenants can defeat bonds, as they proved with the De Young Museum.

Third, if the city’s wealthiest landlords want to display themselves as selfish, greedy and uncaring toward those dependent on San Francisco General Hospital, that’s not a real smart political move. That’s why most have not engaged in such behavior in the past, and will not do so in this November’s election.

Finally, the July 28 hearing on Alioto-Pier’s legislation revealed the measure to be a poorly drafted, completely unworkable mess. It would effectively require the PUC to inspect every apartment unit to evaluate water use, something not easily carried out with their three member inspection staff.

I doubt most of the city’s landlords really want inspectors going unit by unit through their properties. These officials will have to report on missing fire sprinklers and other life safety hazards, in addition to the plumbing leaks that must be abated to prevent tenants from being unfairly penalized for excessive water use.

And despite Alioto-Pier acknowledging the measure’s unworkability, there has been no attempt to fix it since the last hearing. Ted Gullicksen told me that he has not been invited to any meetings with the PUC or landlords to discuss the measure, and to his knowledge no such meetings with tenant groups have occurred.

Prop A is headed for an easy victory, and the big landlords are not going to alter this outcome.