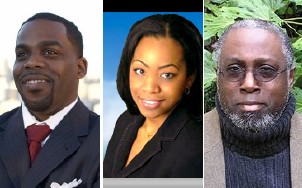 In the wild card race for the coveted SF Democratic Party endorsement, District 10 candidates DeWitt Lacy, Malia Cohen and Eric Smith – in that descending order – received the nod last night. DCCC members are progressive, but also pragmatic – which made giving civil rights attonrey Lacy (who is a relative unknown) top billing a rather curious choice. But conversations with progressive DCCC members after the vote suggested that Lacy was a “consensus pick” – nobody had a real problem with him. Cohen had raised more money, but some expressed concern she was not progressive enough – and her performance at the August 10th SFYD debate did not impress. Eric Smith rounded out endorsements with the Party’s #3 pick, while progressives Tony Kelly and Chris Jackson did not secure a spot. Unlike other districts that boast a wealth of progressive candidates, the DCCC endorsed for all three slots – which will give District 10 voters more guidance in November.