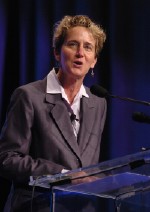 Organized labor is in crisis. And some, including longtime labor commentator Harold Meyerson and SEIU President Mary Kay Henry, believe unions should undertake a strategic shift and prioritize electoral politics over workplace organizing. Meyerson recently wrote in the Washington Post that weak labor laws have “forced” unions to “go outside the workplace,” and touts SEIU’s plan to canvass door- to- door in 17 cities in order to build a “mass organization for the unemployed and underpaid.” According to SEIU’s Henry, “we realized we could organize one million more people into the union and it wouldn’t in itself really change anything. We needed to do something else — something more.” But after unions invested over $300 million in the 2008 elections and got little in return, prioritizing resources outside the workplace is a doubtful strategy for building worker power. And while SEIU has lost confidence in the power of workplace organizing, UNITE HERE, the National Nurses United, the ILWU, IBEW, NUHW, UFCW, CWA and many other unions have not.

The decline in union membership to less than 7% of the private-sector workforce has led to an important rethinking of how unions can regain power. But SEIU’s assessment that the future lies in building some new and amorphous “mass organization” that will help elect and then pressure pro-union politicians reflects a strategy that has already failed, and ignores that union power is based much more on the success of workplace organizing.

Mary Kay Henry’s belief that a million more members wouldn’t make much of a difference is a sharp departure from SEIU’s announcement at its 2008 convention that it would change America by adding 500,000 to its ranks between 2008 and 2012 (it has since added about 50,000 annually). It also appears to conflict with her predecessor Andy Stern’s recent assessments as to why labor failed to win passage of the Employee Free Choice Act or any meaningful labor law reforms in the past two years.

Interviewed by Leon Fink in the current issue of Labor, Stern attributes this failure to overestimating labor’s ability to sway Democratic Senators when unions have only 6.2% private-sector membership. Stern made similar comments to Ezra Klein in the Washington Post on February 24, when he explained the lack of legislative success by noting that unions lack sufficient “penetration in an industry to be disruptive,” and that this lack of density has contributed to the fact that the “Democratic Party hasn’t embraced unions in the last 20 years.”

In other words, Stern argues that unions failed to win labor law reform not because they have not been effective at electing Democrats, but rather because they are unable to get Democrats to back such reforms due to unions lack of membership density.

Stern makes a great case for unions prioritizing workplace organizing. Yet SEIU began moving away from such work and toward electoral outreach only months after their 2008 convention ended, and now Mary Kay Henry is investing even more SEIU resources away from the membership gains that are key to boosting union political clout.

Meyerson views SEIU as perhaps the “best-funded and most strategically savvy of American unions,” an assessment – that if ever true – is long outdated. SEIU’s decision to place its third largest local, SEIU-UHW, in trusteeship, and then attempt to takeover UNITE HERE just as SEIU’s resources and labor unity were most needed for passing labor law reform hardly qualifies as “strategically savvy.”

Yet old perceptions die hard, particularly among journalists and academics who hitched their wagons to Andy Stern and SEIU’s vision of a revived labor movement (I once shared this admiration, and my book on the ongoing legacy of the UFW has a chapter on how UFW alums and SEIU leaders Eliseo Medina and Steven Lerner engineered a brilliant University of Miami janitors organizing campaign in 2007). These outdated perceptions may explain Meyerson’s lack of curiosity about Mary Kay Henry’s plan to enroll the unemployed and underpaid in a mass organization (presumably under SEIU’s control) in which they will have no say in decision making because they are not SEIU members.

It should be obvious to anyone who works in any of the low-income minority communities that any door-to-door canvass asking people to join an organization where they have no decision-making power is a guaranteed failure.

And I think SEIU understands this. That’s why the 17-city effort that Meyerson sees as part of a “strategic shift for American labor” is really only a glorified voter outreach program, an activity that SEIU increasingly prioritizes over workplace organizing.

Further, the AFL-CIO’s Working America program has done a door-to-door canvas for years. For all of its benefits, it has not boosted its dues paying membership or labor’s national legislative clout.

Voter outreach is different from organizing. It builds no membership base, does not empower those contacted, and fails to address what even Andy Stern sees as labor’s biggest political obstacle: a lack of dues paying members.

In 2005, Stern and SEIU sought to address this number one priority through creating the Change To Win labor coalition. But Change To Win – now down to SEIU, the Teamsters, UFCW, and the UFW – seems to have no role in this latest “strategic shift” by SEIU.

Contrary to Meyerson’s conclusion that “unions are going outside the workplace” because “they have no place else to turn,” workplace organizing remains the priority of most American unions. In fact, the two targets of SEIU attacks – the former SEIU-UHW leadership now with NUHW, and UNITE HERE – both prioritize new organizing, with the former winning an organizing drive for union representation at Santa Rosa Memorial Hospital, part of the St. Joseph’s Health System chain in California. SEIU built a statewide St. Joseph’s campaign for years before abandoning it in 2009.

In my own conversations with labor officials in many unions, there appears almost a consensus that more workplace organizing – not less – is key to labor’s future. Many feel that unions have invested far too much time and money in electoral work that has not produced promised results, at the expense of ongoing worker organizing to build membership.

So SEIU’s assessment that it should focus outside the workplace is an outlier that conflicts with the lessons other unions have learned from the Obama era. And it is hardly a “new” union strategy. Cesar Chavez moved the UFW away from organizing and toward electoral politics in the 1980’s, and the union has yet to recover.

I suspect SEIU’s focus outside the workplace will not extend much beyond the 2012 elections, and that its convention next year will again vow to organize hundreds of thousands of new members in the next four years but with much less credibility than when it passed the same resolution in San Juan, Puerto Rico in June 2008.