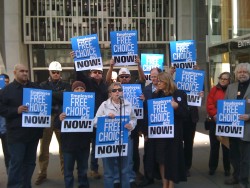 When I lived in Berkeley, the workers at my grocery store (Berkeley Bowl) tried to form a union. A majority had signed union cards expressing support – but the owner insisted on a formal election. After weeks of intimidation tactics and firing “problem” workers, the Bowl workers had a “secret ballot” – and the union drive failed. That’s one reason why we need the Employee Free Choice Act (EFCA), so workers can freely join a union and expand the middle class – free of employer harassment. As the U.S. Senate takes up EFCA, organized labor and allies are focusing on moderate Senators – whose votes will determine the outcome. A large boisterous crowd rallied yesterday in San Francisco – asking California’s Dianne Feinstein to co-sponsor the legislation. Real workers who tried organizing their co-workers told horror stories, while organizers gathered petition signatures – and SF Labor Council head Tim Paulson read out loud the phone number to call Senator Feinstein. Meanwhile, big business is spending millions of dollars to defeat EFCA – and are paying GOP operatives big bucks to make it happen.

The Employee Free Choice Act (EFCA) is the most critical piece of labor legislation in decades – and is crucial at expanding the labor movement. “Working families have been struggling to make ends meet,” said Tim Paulson, “and we need an economy that works for everyone.” Wages are stagnating, and the largest factor at improving workers’ wages is to strengthen union membership. “We can’t rebuild the American middle class without EFCA,” said Sharon Cornu of the Alameda County Labor Council.

EFCA would facilitate the growth of unions by: (a) giving employees the right to request a card-check agreement, rather than leaving it to the employer; (b) strengthening fines and penalties against employers who intimidate workers from unionizing; and (c) binding arbitration for a work site’s first union contract after 60 days. The U.S. House passed EFCA in 2007, but it died in the Senate due to G.O.P. opposition. Now that the Senate has a larger Democratic majority – and a new President who has vowed to sign EFCA into law – it’s time to try again.

But passage in the Senate is no guarantee. Republicans are hell-bent on defeating EFCA, which means we probably need 60 votes to pass it. A few Southern Democrats are still neutral, and one Minnesota Senate seat (which Al Franken won) is vacant due to an ongoing legal dispute. In order to be successful, labor and its allies must target key Senators in their home states. Barbara Boxer is already on board, but Californians need to pressure Dianne Feinstein – demanding that she become an official co-sponsor.

Over 100 activists from unions across the Bay Area descended on the Phil Burton Federal Building yesterday, chanting: “while at work, we need a voice! Dianne Feinstein, sign free choice!” – and four workers who tried to organize told their stories.

“In ten years, we never saw a raise,” said security guard Carlos Gadera. “Which is why we started a union, and which is why I got fired. The boss brought me into the office privately, and said ‘you have no right to do this; this is not your company.’ I pressed charges; and after seven months of unemployment, they finally gave me my job back. Now is the time to join a union. We need the Employee Free Choice Act.”

Four years ago, Frank Garcia tried to organize his co-workers at a factory in Sacramento – because they had a weak pension. “Right away,” he said, “a few of us got fired. That’s the kind of pressure they put on us immediately. A week later, our employer brought in a union-busting consultant. Every day, we would come to work – and there would be a different flyer that said something bad about unions. By the time we had an [employer-requested] union election, we had lost 100 of our workers who had signed cards.”

Union-busting consultants are par for the course when a work site attempts to organize, and employers have paid big bucks to feed them. Now, the Chamber of Commerce and other business groups are using similar funds to defeat EFCA – as disclosure records show them spending $138 million last year on lobbying alone. In fact, as Politico reported yesterday, the EFCA on Capitol Hill is creating jobs for Republican operatives – who are being paid large sums to defeat it. Executives have even equated EFCA with Armageddon, which inspired this video from SEIU. Corporate America is taking it seriously, and working people should too.