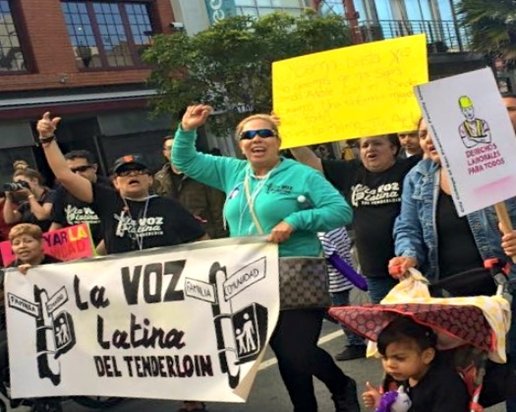 Kelly Guajardo of La Voz Latina del Tenderloin, would like to work herself out of a job. La Voz, like many jobs, organizations and movements, is something the people of San Francisco should wish they didn’t need, but do, and sorely.

Namely, La Voz Latina is the only group of its kind dedicated solely to organizing Latino families in San Francisco’s Tenderloin neighborhood. As the Mission neighborhood struggles to keep its dwindling Spanish speaking population, the Tenderloin remains a bastion for Spanish-speakers and in particular low-income and undocumented individuals.

La Voz operates as a one-stop shop for the Latino community in the Tenderloin, providing assistance with housing, a leadership program primarily for Spanish speaking mothers, assistance navigating pathways to citizenship, and limited case management. As a leadership program, the mothers and families involved with La Voz have taken it upon themselves to make the Tenderloin safer for their children, proving that a real grassroots effort from a historically under-heard community is not only possible but extremely effective.

“Our leaders are fierce,” says Guajardo, Program Manager of La Voz Latina, which was founded in roughly 2005 and housed under the non-profit Tenderloin Housing Clinic. “They want what every parent wants–a welcoming neighborhood, affordable and safe places to live, and opportunities for their children. It’s a pleasure to facilitate ways for them to make this a reality.”

“I have worked with La Voz Latina since its founding days in the Tenderloin Community,” says Pat Zamora, Director of the Tenderloin’s Boys and Girls Club. “La Voz is the only effort that has consistently organized within the immigrant, Latina community in the Tenderloin.

La Voz, which is primarily mothers, have led in collaboration with other organizations community safety efforts such as Safe Passage and the activation of MacAulay Park, and provided leadership and guidance for the improvement of the neighborhood to benefit the children, families and residents…. They have been leaders as only mother[s] can, with fierce determination and love to better the lives of their children and community”.

As one example of their work on public safety, La Voz responded directly to violence near one of the Tenderloin’s children’s playgrounds with  a monthly positive activation. Partnering with various for- and not-for-profit groups, La Voz has sponsored 10 monthly activations at Sgt. MacAulay Park at Larkin and O’Farrell, each of which attract between 50 and 100 people each. Neighbors from nearby apartment buildings bolster the volunteer efforts and provide everything from balloon animals to face paint and games, all out of their own pockets.

Speaking to the Police Commission about stabbings, shootings, and chronic drug traffic directly outside the park, one of La Voz’s leaders, Miriam Aspajo,  told the Commission, “As a mother it pains me to see Latino men hurting each other. We need to do something about this.” Instead of merely asking for enforcement, La Voz has dedicated countless hours to these monthly events and the rewards are clear. The numbers of families and children at the park has increased markedly, according to neighbors. Other partners are excited, as well.

Captain Jason Cherniss of Tenderloin Station sees La Voz as a valuable partner. “The value in what La Voz does is in showing non-English speaking, and primarily Latino residents, that there are positive and safe ways to get involved in the Tenderloin community. By organizing monthly events for families they embody the spirit of what community policing partnerships are all about. I think they have made an amazing impact in influencing hearts and minds to bring people more involved in the greater Tenderloin community, not to mention getting people interested in the challenging intersection of Larkin and O’Farrell.”

At a community meeting in July of 2014, part of the fact-finding work to determine how to improve Sgt. MacAulay park, families described their dismay at the improper uses of a public restroom outside the park. Since that time, use of the bathroom has improved. Francois Nion, the EVP & General Manager of the toilet’s operator, JC Decaux, has said: “The JCDecaux San Francisco team is grateful to have La Voz Latina as a community partner. Their monthly community events at Sgt. MacAulay Park have had a positive impact, creating a more livable and safer neighborhood.  We are looking forward to further collaborating with La Voz Latina for the benefit of the children and families of the Tenderloin. Once again it shows that when the members of the community are working together great things happen.”

Other city agencies including the District Attorney’s office have also partnered. “We have been delighted to work with La Voz Latina to improve safety in the Tenderloin. La Voz is truly an example of how the community can take back their own neighborhood in a way that interrupts–for however long– cycles of violence or incarceration. They have shown a tangible benefit to safety in the Tenderloin and have done so with only two staff people and a cadre of dedicated volunteer leaders,” said Marisa Rodriguez, Assistant District Attorney and Director of Community Relations.

La Voz Latina receives funding from the Mayor’s Office on Housing and Community Development, which renews the contract each fiscal year. Guajardo says that in the next year La Voz is looking to restore funding it had in past years.

For the past several years, La Voz Latina has been operating on a shoestring budget close to $50,000 lower compared to previous years, but doing as much work. “We hope to move into our own office and establish a physical space for Latino families to get together, organize, access resources and information, and support one another. We also hope to support community members as they apply for administrative relief (DACA, DAPA) and would like to expand our leadership program to provide increased opportunities for community engagement as well as deepen our impact in the neighborhood.”

At a time when San Francisco cannot hide its need for such work, La Voz is here to provide it.