L.A. teachers to McDonalds: Stay away from our students

by Sriram Madhusoodanan and David Monahan on November 2, 2016 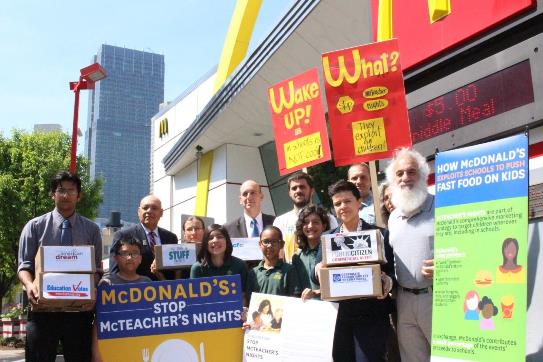 This week, Los Angeles teachers made it very clear: it’s time for McDonald’s to stay away from their students and schools. “Across the country and in Los Angeles, McDonald’s is exploiting our schools and teachers to market its unhealthy fare to children,” said Cecily Myart-Cruz, vice president of United Teachers Los Angeles (UTLA).

McDonald’s and the junk food industry have long preyed on the basic vulnerabilities of children to market unhealthy food to them and turn them into customers for life. One distressing and unconscionable marketing tactic McDonald’s uses is McTeacher’s Nights, where the corporation has teachers work behind the counters in local stores selling burgers, fries, and soda to students and students’ families. McDonald’s claims McTeacher’s Nights “help raise funds” for local communities, but it’s a thinly veiled marketing tactic.

A growing number of parents and educators understand this, which is why last month, UTLA, whose 31,000 members make it the second-largest teachers union local in the country, announced a resolution condemning McTeacher’s Nights. The resolution decried the events and urged UTLA members not to participate.

Myart-Cruz cites three critical reasons why UTLA is calling for a stop to McTeacher’s Nights:

You can read the full letter here.

Parents, educators and McDonald’s own shareholders have also consistently raised concerns around its marketing practices, including at its annual shareholders’ meetings. No doubt, after a year of pressure from teachers unions, parents, and public health advocates, McDonald’s is feeling the heat: earlier this year it quietly pulled its “McDonald’s Educates” website.

From local actions like those by UTLA and soda taxes on city ballots, to national policies like the USDA’s updated school wellness policies, the public shows an increasing understanding of the role junk food corporations play in driving a dire health crisis. No matter how McDonald’s tries to spin its marketing in schools, more and more people are not “lovin’ it.”

It’s high time for McDonald’s to take a hint and heed the call of teachers and parents alike and end these events for good.

Sriram Madhusoodanan is the director of the Value [the] Meal campaign at Corporate Accountability International. David Monahan is the Campaign Manager of the Campaign for a Commercial-Free Childhood.