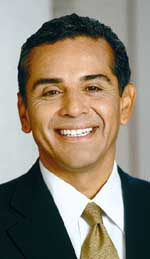 Ed. Note: With Gavin Newsom under growing criticism for neglecting San Francisco as he runs for Governor, this piece by a prominent Los Angeles activist about their Mayor’s recent decision not to enter the race should interest Beyond Chron readers.

It’s been a while since I’ve been on the same page at the same time with Los Angeles Mayor Antonio Villaraigosa. As one of the few black stakeholders who backed his losing bid in 2001, and returned to support him in 2005, only to have to bash him for engaging in token reciprocity with the black community the past few years, I wasn’t exactly enamored with the prospect of a Villaraigosa gubernatorial run and quite frankly was gearing up to oppose it. Why? Simply put, Villaraigosa hadn’t done enough as mayor to qualify for gubernatorial consideration. Being elected mayor twice of the state’s largest city doesn’t qualify.

The city is in shambles. We’ve got a budget crisis. The schools are in shambles in all respects – and Villaraigosa puppeteered the ouster of a community favorite as school superintendent. The city has a water shortage and an emerging race war (Latinos killing Blacks) that he has become increasing silent on. And he’s got a reputation for being out of the city more than he’s in the city. He’s tried to put an inexplicable tax on the people (Measure B, which we helped defeat), attempted a Tammany Hall power coupe with controller and city attorney (which we helped break up), and hasn’t been able to restore economic confidence in the worst parts of the city — South and East Los Angeles — that he’s from or knows his way around but is rarely seen in.

You generally see Mayor Villaraigosa in one of three places; wherever there’s a television camera, with a celebrity (or at a celebrity event), or in the cmopany of a high-ranking federal official from the President on down (pick one). His mayoral tenure has been one big photo op, so you understood he was posturing for a reason — his next political run. Given his well-publicized personal problems and political slippage, Villaraigosa’s Teflon persona couldn’t deflect what an incalculable risk running for governor would be at this point in time. Not just for the Mayor’s prospects, but for the city of Los Angeles itself. Villaraigosa’s “no-go” could be a blessing in disguise. For the first time since he’s been mayor, he’s not running for (or from) something. He’s free to be a full-time Mayor to deal with L.A.’s full-time problems.

Let’s really understand what that means in the context of LA’s political realities. Now understand, the Mayor’s not a bad guy. In fact, he’s a pretty smart guy. He’s book smart, he’s street smart, and he’s politically savvy. Plus he has looks and a smile that rivals Magic Johnson’s (and I thought I’d never see a smile rival Magic’s). All the ingredients for political seduction, thus why the Mayor acquired a reputation of being “self-absorbed.” However, it’s a great combination for a run at the top, and for Villaraigosa, there were endless possibilities from Governor to President. In fact, with the demographic curve being what it is, he’s been mentioned for everything from Governor to Vice President.

Nobody but Barack had the audacity to consider the Presidency, but now that he’s done it, don’t think that’s not on Villaraigosa’s (and any other 21st Century politicians) radar, too. But to run for governor, your stars have to be aligned. Villaraigosa’s weren’t – and you can name a number of reasons – however, the most important was having a city running like clockwork.

What the Mayor may have realized was that running for Governor meant pointing to successes in Los Angeles. Oops, up jumped the devil. Then there is what is required to fix the problems the city faces. Running for governor requires the mayor to be out of the city three to four days a week for the next year. We already know our Mayor is “trip-happy.” Los Angeles Times columnist Steve Lopez has already busted him on that “traveling on city business” tip a few times (and has chronicled his travels). With the state of the city’s economy, if Villaraigosa’s travel wasn’t tied to money, he shouldn’t be traveling. Traveling for votes wouldn’t really look good in the midst of city and school district layoffs. It was a no-win situation.

A vulnerable politician in a vulnerable city made not a good combination. So the Mayor was smart enough to say “no-go” this time around, and we know it’s only a slight pause. Villaraigosa is too young (mid-50s) and too ambitious for it to be a last call. It could provide for a resurrection opportunity if the Mayor is willing to roll up his sleeves, cut out the photos-ops, and save his city from catastrophe. He might actually win some friends again for putting the city ahead of himself. It was so, so, so un-Villaraigosa-like. Maybe it’s the kind of civic-minded compassion that made us like the guy before he got the big head. Okay, let’s not get sentimental…

He’ll need every waking hour of every day to do it, but that’s what Los Angeles needs right now – a full-time Mayor to deal with its full-time problems.

Dr. Anthony Asadullah Samad is a national columnist, managing director of the Urban Issues Forum and author of Saving The Race: Empowerment Through Wisdom. This piece first appeared in The Black Commentator, and at L.A. Progressive.