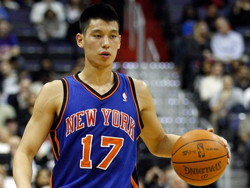 While most NBA fans are enjoying Linsanity and think the Knicks guard is off to a Lincredible start, Jeremy Lin’s success has given new opportunities for racist sports talk hosts to make fun of Asian-Americans. On the February 15 Nick and Artie show which runs weekday nights on San Francisco’s KNBR’s 1050, the host was urging listeners to call in with the most racist joke about Lin and Asian-Americans they could think of. He offered a “joke” about Lin having to do Carmelo Anthony’s laundry as an example of what he was looking for. KNBR, which prides itself as “The Sports Leader,” seems to be aspiring to the title of “Racist Sports Leader.” It raises questions why station owner Cumulus Media thinks it’s funny to racially slur Asian-Americans.

I was driving home after dinner Wednesday night and because the Warriors game was on KNBR 680 I tuned into its 1050 partner to hear sports talk. But what I heard stunned me.

A radio host who would never be soliciting watermelon jokes about LeBron James or Kevin Durant was urging listeners to call in with racist anti-Asian jokes about Jeremy Lin.

Cumulus Media has long contracted out this time slot, and it is now held by the “Nick and Artie show.” The hosts promote a good old boys approach to sports that includes making racist on-air jokes about Jeremy Lin.

This is occurring in a region where KNBR’s audiences in San Francisco and Oakland have Chinese-American mayors, and where Asian-Americans have overcome over a century of discrimination. And on a station that prides itself as the “50,000 watt flamethrower,” meaning that its racist diatribes can be heard from the Central Valley to the Oregon border.

In the course of making racial slurs against Lin, KNBR’s team also attacked Woody Allen’s wife Soon-Yi Previn for, in their view, being insufficiently demonstrative when accompanying her husband to Knick games. Nick or Artie made a crack about how Ms. Previn did not appreciate the United States and should recall that she could be back in the heat of the Philippines—-Soon-Yi Previn is a native of South Korea, but for these race mongers I guess all Asian countries are the same.

I know that federal regulations of media are not as strict as in the past, but how Cumulus can keep its license while not simply promoting but encouraging and soliciting racism against Asians is a mystery. Lin is for real and he is not going anywhere; Cumulus needs to publicly explain why it is providing a forum for Nick and Artie to racially slur not just Lin but all Asian-Americans.