Kings Of Mambo May Lose Their Throne! 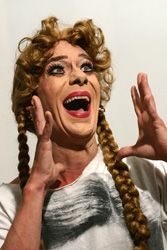 MAMBO KINGS is one of those shows that could be a great, swift paced Broadway musical. But for this to happen they need to prune and prune some more. The first act has to desperately move faster. Get the trouble with the girlfriend over with. Then the dazzling opening number would be the perfect background for the ambitious brother to tell his younger brother that his girlfriend married someone else and that this is the perfect time to go to America and become famous. As I see it – this setup should take no more than 15 minutes, leaving the audience dazzled by the opening and the swift departure of the two music guys who later take on the name of “The Mambo Kings.”

Whether it is intentional or not, the one brother (Esai Morales) can’t sing very well. Maybe this is on purpose to show us that the younger brother (Jaime Camil) is the better singer. Plus the younger brother is the one who writes most of the music that they play. So now we see why brother Cesar tricked Nestor into leaving his beloved Cuba and the love of his life.

But don’t give up on all the “Mambo” talk. Somewhere in-between the sounds of the bongos there is magic. For instance, how can anyone not be fascinated by ALBITA whose presence lights up the stage as nightclub owner/narrator and all-around gypsy fortuneteller. “This one has a big heart she tells Nestor while holding his hand.” “This one has a big heart, but it is troubled” – she tells Cesar. She also sees bad things happening to them. Wow, she’s good. How could she possibly know that when she is off the stage – the magic leaves with her? I say, give her more time. She has star power. Make her the Mambo Queen.

The dancing explodes. They slither around each other like snakes. Exciting stuff – after seeing this – you won’t need Viagra. The musical is not all tragedy. There is comic relief. There is the one Mambo King in the band that is Jewish (Dennis Staroselsky). He falls for one of the Cuban neighborhood girls. Naturally they can get some fun and some good lines from this affair. There is also a clever electronic scene in the musical. The two brothers get discovered by Desi Arnez (Allen Hidalgo) He takes the Mambo Boys to Miami to be on the I Love Lucy Show. It looks as if they took a real Lucy episode and replaced the original Hispanic actors with the actors in the musical. It was an amazing editing job and was very funny as the edited version was shown on a big TV Screen.

Then the action slows down. Nestor (the one with the good voice) cheats on his wife. Yes, he married the Madonna of the neighborhood, but during the night in his sleep he mutters the name of his Cuban girlfriend Maria. The brothers get into a fight over this – but continue their career for a while. Meanwhile the dancers keep us from drifting off.

Then the chance of a lifetime comes from a gangster (David Allan Grier) who controls all the clubs in town. He wants them to perform at The Palladium, if Nestor will agree to go solo and sign up with him. Nestor agrees – which ends up being his undoing. Now here is a chance to really rev up the show. This was supposed to be the big break for the “Kings”. But on opening night at the Palladium you could have shot a cannon thru the dance floor. Where were all the actors and dancers? They certainly were present in other club scenes.. Didn’t anyone look at this musical and say “You know what – I think we need more people in this scene.” In its favor are the magnificent neon Marquees that come down to define each club where the Mambo Boys play. Extraordinary color that draws you to the stage. All the visuals – the Sets, lighting and the costumes are great. The dancers add the steam to keep the musical alive and the singing of Albita and her look will probably never leave my mind. Love those headdresses.

I think that the show can still make it on Broadway with some changes. Two hours and 45 minutes is too long. Chopping off 15 to 20 minutes would help bring things up to a Mambo speed. And keep in mind that the first act needs more dancing. Take that number from the last of the second act where the dancers wear wooden thongs and clomp on stage. It’s a clever diversion in the wrong place.

The stage looks glorious framed by a huge banana leaf with tiny lights all around. Now if only the actors could convey that charisma.

REAL LIVE DRAMA: Before the musical, I went with friends to Original Joes about a block from the theater. Talk about a “Rent” set. I ordered the pan friend Chicken. It’s always good. Couldn’t eat everything – so I had them wrap up two pieces of the chicken and the bread that was left to take with me. They packed it in a little white bag. Now, I have done this many times before, and usually place it under my seat so that it will be out of the way. A party of three sat down behind us – two younger men and an older women who looked to be their grandmother. They went somewhere, and the older women asked me “Is this a film?” I told her no, that it was a live show with dancing and singing. Then she said “When does the movie start?” I again told her the same thing. I heard nothing more from her. At intermission. I left my back pillow on the seat, and my midnight snack under the seat. Everyone in my row left to go to intermission, as well as the people in the row behind me. Only the older lady was there. When I came back – I looked under my seat and my Chicken was gone. I asked the older women if she had seen my little white bag. She muttered something about “I don’t speak English”. I said -“You spoke English about an hour ago. What happened?” She ignored me and just kept clutching her drawstring bag on her lap. Which I am sure contained my midnight snack. I couldn’t beat her up. She was too old – and the audience would have turned on me. I couldn’t take her bag and look through it. She would cause a scene. At the end of the show I asked the head usher if anyone had turned in the Chicken. I told him the story. He said “That the most bizarre thing that has ever happened in the theater. People have taken other things like an umbrella by mistake maybe – but never food.” They were all laughing – but I wanted that Midnight snack. I wonder where my chicken is now? I probably will never see it again. I suggested to the staff – that they write this little drama into the script. It can’t hurt.

DON’T TAKE YOUR NEIGHBORS NEWSPAPER – I WILL TELL YOU WHATS ON!

The love affair with Les Miserables started in 1989 when the musical opened at the Curran Theater in a stunning production. It played for over a year to sold out houses. It has since returned in 1992, 2000, and 2002. Now on June ninth – one of the greatest Broadway musical ever, is about to enchant the City again. You won’t want to miss this sweeping story of the haves and have-nots set to stirring music. You might even be inclined to grab a flag and march with the rebels on the stage. It’s that stirring!

What’s a boy to do? He is sixteen, sexy and gay and in High School. That’s the premise of Patrick Wilde’s coming of age play “What’s Wrong with Angry?” This play closes the successful Pride Season Ten at the New Conservatory Theater.

DAMN GOOD! That’s what we said about “Shut Up, Sweet Charlotte” several years ago. Of course I jest with the name. The satire of the movie is actually called “Hush Up, Sweet Charlotte” and is playing – or is it stalking? .At the Lorraine Hansbeery Theater across the street from the Marines Memorial Theater where Kate Mulgrew has become Kate Hepburn in her one man show. Did I say man? Well, I only saw Hepburn in pants – it’s all so confusing. “Hush Up” stars Matthew Martin and Varla Jean Merman. .and we may wish that they would “Hush Up”.

Vallejo Music Theatre celebrates their 39th season with some big musicals. Gypsy bounces onto the stage on July night. Followed by Cinderella Dec. 8. Perfect for the Holidays and the eerie by blood curdling story of “Sweeny Todd”. A Great musical that should be recognized as an Opera and performed some day on the San Francisco Opera Stage. Maybe that will get people back to the Opera. Here is a tip Opera Managers. People like Operas with a melody. All new Operas should have a least one song that people will remember. It worked for Puccin andVerdi. More info on Vallejo: vallejomusictheatre.org.

WHAT INSPIRES YOU? LET BUZZIN KNOW WITH TIPS, AMUSING THINGS YOU’VE HEARD AT THE THEATER AND OF COURSE, YOUR RANTS AND RAVES. It’s Phone Buzz Time. buzztatler@aol.com