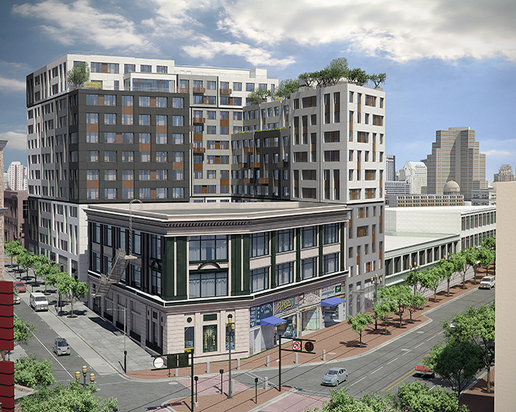 On Thursday, March 17, the San Francisco Planning Commission  considers the most positive private housing development project proposed for the Tenderloin in decades: a 300-unit rental project at Golden Gate and Jones to be developed by the site’s longtime owners, the Shorenstein Company.

This project could be a case study on how market rate housing can benefit low-income neighborhoods. It will improve safety in the area for multiple nearby buildings housing below-market rate tenants. It will also return a key stretch of Jones Street to the positive area it was for decades until the Hibernia Bank closed and Harrington’s Bar at 9 Jones Street relocated.

The Shorenstein project is on a parking lot that was once home to the historic Paramount Theater. Opened as the Granada in 1921 and renamed a decade later, the 2656 seat theater (!) was second only to the Fox in the pantheon of opulent San Francisco theaters.

Tragically, the majestic Fox (at the current Fox Plaza) was demolished in 1963. The Paramount fell to the wrecker’s ball two years later.

It has been a parking lot ever since. And for at least two decades the area outside the lot has been a prime drug dealing and high crime area.

Fortunately, this criminal activity did not deter nonprofit groups from building housing and acquiring nearby sites. Thanks to the vision of the late Victor Honig, who owned the site, Mercy Housing (in its prior incarnate as Catholic Charities) built an affordable project at a former parking lot at 111 Jones diagonally across from the Shorenstein site.

Conard House purchased the Lyric Hotel at 124 Jones for supportive housing. The organization I head, the Tenderloin Housing Clinic, leased the Boyd Hotel at 41 Jones for housing formerly homeless persons. Mercy built a ten-story senior housing site above the new St. Anthony’s Dining Room right across the street from Shorenstein’s project. The De Marillac Academy, which opened in 2001 and provides a top-notch education for Tenderloin kids, is less than a block from the Shorenstein site.

It is likely that no market rate development in San Francisco history has the potential to do more to help low-income residents than the Shorenstein project. It will dramatically improve the surrounding area for the low-income residents in non-profit housing who are  now victimized by the current drug scene.

Despite the Tenderloin not having a single no-fault eviction on record since 2000, some who see any market rate housing as having a “ripple effect” that will raise rents and displace tenants down the line.

Such fears do not apply to this project. In fact, low-income tenants will be the big beneficiaries of a project that will transform the nearby areas into a safer neighborhood.

All of the housing in immediate proximity to Golden Gate and Jones is either permanently affordable or nonprofit run and subsidized. In addition to the buildings noted above, TNDC’s Civic Center Residence (44 McAllister) and Mercy’s Dorothy Day housing (54 McAllister) are less than a block from the Shorenstein site.

These nonprofit tenants deserve to be able to walk around Jones and Golden Gate and Jones and McAllister without worrying about being mugged. Most of the Boyd Hotel tenants and staff I have talked to do not go out at night due to safety concerns. Nor do they even go to that side of the street with the parking lot during the day as they do not want to navigate walking by drug dealers.

This is the first project to be considered by Planning since Supervisors Kim and Peskin reached a deal with Mayor Lee on raising the inclusionary housing requirement from the current 12%. Part of the deal requires the city to recover the estimated 200 affordable units lost when Prop C in November 2012 reduced the requirement from 15% to 12%.

Some community members will ask the Commission to start the recovery process by urging the Shorenstein Company to agree to a 15% fee. That would add another nine affordable units to the project, and potentially set a precedent for future developments.

Rick Jacobus pointed out last week in his excellent Shelterforce article (“Why We Must Build”) that “any realistic proactive strategy for combating displacement has to offer a way to get more housing built–both permanently affordable and market-rate housing.” For a neighborhood that has had only one private development built in the past decade, this project is a major step forward.

The Shorenstein project creates a safer and more desirable Tenderloin for existing residents. The Planning Commission should  approve it when it comes before them on March 17.

Randy Shaw is Editor of Beyond Chron. He discusses how the Tenderloin averted gentrification in his book, The Tenderloin: Sex, Crime and Resistance in the Heart of San Francisco.