Kerry’s “No Retreat, No Surrender” Speech 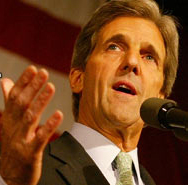 John Kerry delivered a dynamic, thought-provoking, and strategically-savvy speech with a gusto that few thought him capable. It included the type of memorable lines often found in Ted Kennedy’s speeches, a resemblance explained by the nominees reliance on the elder senator’s speechwriter. Kerry rose to the challenge of giving the “speech” of his life—and there is much in his choice of words and themes worth pondering.

We will never know if Al Gore had been allowed to become President whether America’s military readiness would be the central issue of the 2004 Presidential campaign. But in light of 9/11, even without the Iraq war the military theme of the current race may have been inevitable.

We therefore saw a Democratic Convention and a Kerry acceptance speech framed around military themes. This makes some progressives uncomfortable, but poll after poll shows that undecided voters are most concerned about Kerry’s capacity to fight terrorism.

Kerry’s speechwriters had a field day with the image of young John Kerry sailing down the Mekong Delta for his country.

The voyage showed the nominee that “all Americans are in the same boat,” and demonstrated that Kerry is decisive, would never recklessly risk soldiers lives, is not afraid to take risks, and that he put his life on the line for freedom.

In 1988, George Bush I cleverly used the metaphor of his days as a bomber in World War II to support the theme of “mission undertaken, mission accomplished” (don’t expect the latter phrase to be ever spoken again by the GOP). But never before has a single image been used as often and more creatively than Kerry on the boat going up the Delta.

You know a speech is brilliant when the vision of Kerry’s voyage sticks in the mind.

Kerry’s asserted that he would not claim that “God is on our side” but that it is more important that “we be on God’s side.” Best line on the subject since Bob Dylan.

Kerry’s speech even paid tribute to, and drew power from, Michael Moore’s Fahrenheit 9/11. When Kerry denounced America’s reliance on the “Saudi Royal Family,” it evoked Moore’s montage of the Bush family shaking hands with the Saudi’s.

Kerry entered to the hall to Springsteen’s ” No Retreat, No Surrender.” Few thought the Kerry campaign would have the guts to play that profound and moving anthem, thinking it more likely he would use something like the safe “Don’t Stop Thinking About Tomorrow” a la Clinton.

Kerry also avoided the mistake of using the Who’s “We Won’t Get Fooled Again.” While the title appears a good indictment of Bush, this song was written as a criticism of the 1960’s social movements—not the corporate world.

The post-speech song, U2’s “It’s a Beautiful Day,” is not deep but U2 and lead singer Bono are as progressive as mainstream artists get.

The most surprising portion of the speech was Kerry’s description of the 1960’s as “a great journey” which he vowed to resume as President.

Bill Clinton was often defensive about his actions during the 1960’s, and Al Gore seemed entirely disengaged from the era’s movements. John Kerry would be the first activist of the era elected President.

Kerry’s link between the 1960’s and his current campaign was surprising because, as Clinton recently observed, one’s attitude toward the decade may be the biggest factor in whether people support Republicans or Democrats (Greens also like the 60’s). In seeking votes from Republicans and independents, praising the 60’s is not the safest strategy.

In a convention in which Bill Clinton gave his best speech ever, Barack Obama confirmed his “rising star” status, and Kerry exceeded all expectations, my choice for most effective speech goes to Max Cleland. After Cleland got through talking about the loss of his limbs and how in 1971 he was inspired by John Kerry to make something of his life, even cynics must conclude that John Kerry is a good man.

Following Cleland’s emotional introduction (with Kerry’s crewmates standing behind him ), the crowd was primed. It was also ready to believe that, as Kerry-Edwards both pledged, hope is on the way.