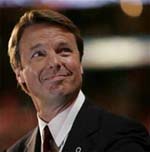 Responses to my above column arguing that 2006 was the start of a new progressive era raised two issues that deserve further discussion. First, many noted that John Edwards would also be a President who supported progressive movements. This is absolutely correct. Edwards would be a great president, but for reasons discussed below I do not see him defeating Obama or Gore. Second, a surprising number of people focused on the ideology of these latter two potential presidents rather than accepting my premise that grassroots movements are the chief agent for national progressive change. With Washington Post columnist E.J. Dionne also arguing yesterday that “2006 is looking more and more like one of history’s hinge years,” it is up to activists, not politicians, to fulfill these expectations.

A day after my column on 2006 as the start of a new progressive era, I was pleased to see E.J. Dionne write the following on December 19: “When a nation alters its philosophical direction and changes its assumptions, there is no press release to announce the shift, no news conference where The People declare they have decided to move down a different path. Yet, a moment when old ideas are cast aside, new leaders emerge and old leaders decide to speak in new ways.”

To my regret, some readers interpreted my belief that Al Gore or Barack Obama would be the Democratic Presidential candidate in 2008 as slighting John Edwards’ progressive credentials.

Let’s clear this up right away: Edwards has been an outstanding ally of working people, and would be a great president for progressive interests.

But Edwards has not aroused the level of passion and interest among everyday Americans as has Gore or Obama. He did not galvanize voters during his presidential primary race in 2004, or in his role as John Kerry’s Vice-Presidential nominee. Edwards was also less than impressive in his debate with Dick Cheney.

Since his defeat, Edwards has devoted himself to supporting worker struggles across America. He has become a hero to organized labor, and if this carries him to the Democratic presidential nomination in 2008, that would be great.

But Edwards lacks the star quality/new politics image of either Obama or the repackaged Gore. And while he is certainly no less progressive than either, my sense is that Democratic primary voters will not select someone who was on the losing 2004 ticket.

While responses regarding Edwards were understandable, little did I suspect how many progressives appear to subscribe to the “great man” theory of history. In other words, they believe it is leaders who primarily shape history, not social movements.

I argued that a new progressive era requires a President willing to be moved to the left by a grassroots base, and believe that Obama, Gore and Edwards all fit this requirement. But some progressives seem to feel that none of these three are sufficiently “left” to make a difference, and that only electing someone like Pacifica Radio’s Amy Goodman or filmmaker Michael Moore can America usher in a new progressive age.

Under this analysis, there was no way that someone like Lyndon Johnson would ever lead the fight to pass landmark civil rights laws, or declare a national war on poverty. Nor would wealthy Franklin Roosevelt, who actually ran to the right of Herbert Hoover on economic issues in 1932, enact the New Deal.

As the saying goes, if the people lead, the leaders will follow.

If America finally joins the rest of the industrialized world in providing universal health care, and reorients its budget priorities away from war and toward education, housing, and other social needs, it will come because a grassroots movement demanded these reforms, not because the nation elected a President with solid left-wing views.