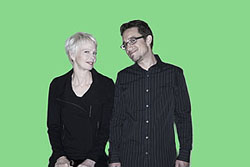 “And for all the lively tempos, Devo-esque electronic pulses, and edgy avant-rock drumming, a certain darkness pervades many of the tracks. Dramatically ascending and descending glissandos, overlapping mournful phrases from two to six overdubbed celli, a feeling of unrelenting compression and extension, and eddies of dense, shadowy textures all contribute to the inexorable emotional gravity. What pops out from this canny interplay of mechanical and human elements is a complex musical personality as singular and fresh as it is steeped in history and experience.”

Working with co-producer Justin Lieberman, the duo tracked the album at San Francisco’s Studio Trilogy in a highly collaborative and improvisational fashion. “I had a great time working with PC on beats for a couple of tracks on my last record (the Grammy®-nominated ‘Strange Toys’),” Jeanrenaud notes. “So we thought we’d just dive in completely this time, and also have some fun working with pop-song structures, as well.”

“I had a lot of material when I went in to record Strange Toys,” says Jeanrenaud during a recent interview with NPR radio host Liane Hansen, “… And I sort of picked what I thought was the best material I had composed over the last several years. This time, I didn’t have any material! So PC suggested, ‘Well, why don’t you just come in the studio, and we’ll play around, and we’ll just create some music by doing that process, just the two of us collaborating.'”

“Sometimes we’d start with a beat idea….and other times we’d start with a cello line, or an arrangement of a piece Joan had already finished,” Muñoz says. “We’d mess around with ideas, and Joan would improvise melodies and themes…then she’d take home the demos, spend some time composing, and return with a piece that we would then start recording for real. It was a lot of fun, and very loose.”

“The interesting thing is that when they hear the record, a lot of people might assume that the avant-garde stuff on the album is all from Joan and the funk/hip-hop stuff is all from PC,” observes co-producer Lieberman. “But that isn’t the case—some of the coolest, hip-hop-like ideas came from Joan, and some of the really out-there ideas came from PC. It was a very high level of collaboration and genre cross-pollination; very exciting to see.”

With “Pop-Pop”, Jeanrenaud and Munoz have met the challenge of devising new music for cello in the studio, and have come up with some of the most unique and creative music I’ve heard in some time. “That’s why we ended up calling it Pop-Pop,” Jeanrenaud says, “because it was the pop record that wasn’t actually pop.”