Jill Johnston: Gone But Not Forgotten 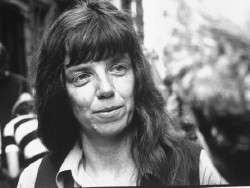 In those early years after the Stonewall Riots, when many of us came proudly charging out of our closets, writer Jill Johnston gained notoriety for doing what many of us in the radical queer liberation movement were doing: being defiant as all hell against a system that deemed us sick and sinners.

Johnston died recently in Hartford, Connecticut, she was 81. Reading her obit on the internet yesterday, I couldn’t help but recall a time when we in queer liberation were pranksters and used theatrics to (we hoped) bring down a system that oppressed us all.

Johnston, who was born in 1929 in England but grew up on Long Island, New York, started out her writing career as a dance critic for the Village Voice in the late 50s. She came out in a 1971 column called “Lois Lane is a Lesbian” after gay liberationists invited her to one of their meetings. Her post-coming out antics are the stuff of legend.

At a benefit for the women’s movement in a posh Hamptons house, a topless Johnston leaped into the pool as Betty Friedan, who helped launch the 60s revival of feminism but who was also uncomfortable with dykes in the movement, was speaking.

At a debate between her, other feminist leaders and writer Norman Mailer (who had just released a book criticizing the feminist movement), Johnston read a manifesto, “all women are lesbians except those that don’t know it yet,” and then suddenly engaged in heavy necking with a woman who jumped onto the stage. A third woman joined them for a demonstration of how powerful sisterhood is.

Kate Millett, another lesbian/feminist writer of the time (and author of Sexual Politics), described Johnston’s action as “a wonderful performance art piece. She wasn’t going to debate anything.”

Many of us shared that philosophy. As Johnston was jumping into pools, I was trying to join ROTC by walking up to a recruitment table in radical drag. On a TV debate with an aversion therapist, I refused to let the bad doc get a word in edgewise, prompting the director to hold up a sign to the host that read “shut him up.”

Thankfully, there was no shutting us up in the early 70s.

Johnston wrote Lesbian Nation in 1973, which became one of the defining works of the early lesbian liberation movement, spawning separatist lesbian communities throughout the country. In the book, she argued that lesbianism was more than a personal choice, it was a weapon against patriarchy and male dominance.

She never gave up her belief in feminism or in the revolution we were all trying to create in the 70s, though she obviously changed her mind about marriage being an oppressive institution, tying the knot with her girlfriend twice — once in Denmark in 1993, and again more recently in Connecticut. She also came to think of Lesbian Nation as “a period piece,” a relic of a time long gone.

Johnston may be gone, but she’s not forgotten.