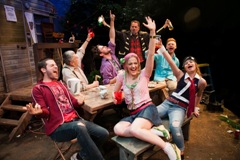 Into the woods is where we go. There is Johnny “Rooster” (Brian Dykstra), a local feisty wanted man. The cops want to serve him an eviction notice. That doesn’t seem to bother Johnny, the opinionated eccentric teller of improbable stories – puts on Grand and drunk parties anyway. He gets a big supply of drugs – and even gives some to under-age kids.

The Air is full of cigarette smoke (Pot). They roll around the garbage in the middle of a pleasant area, but don’t breath the air. His motley crew hangs around the great trees. And there is a whimsical elderly professor (Richard Lewis James) that spouts philosophical nonsense. He is the funniest guy on the stage, and James is Glorious Fun. First Rate!

There is a young teen, who has been hiding in a sofa bed. Very clever. Who would have thought that someone could hide in a sofa bed with people sitting on top of you. Well, it sure is not part of “The Royal Court”. It scared the hell out of me. Don’t get frightened by the ribald insane people on the stage. The ribald humour never stops. And that is somewhat of a problem. It goes on just a little bit too much in this defiant man that thinks he is King of the Jungle. Well, in the end — his snickers get pulled right off of his butt.

Jerusalem (the Play) by jez Butterworth opened at the downstairs theatre of the Royal Court Theatre in London in 2009. It’s run was extended and from there it dragged its motley crew to other Theatres around the world.

‘Rooster’ is the daredevil and tells his bunch of drunken young people of all the great things he has done. He’s a modern day Pied Piper that just can’t wait for someone to kick his butt around. He has a young son. Rooster hardly ever see’s him except at a Carnival. His dad gives him a couple of gifts and off the kid goes on.

Yes Sir – the preacher of the play is a drug dealing alcoholic who thinks of himself as a noble hero. His so called love of his estranged son, provides a refuge for abused teens.

Unfortunately the overwhelming unpleasantness quickly alienates the audience. Getting water on people in the first row was not funny. Maybe it was a mistake.

There is much to talk about this play in the woods. Sure — it has Englands charms in many ways — But England is not so green and not so ‘pleasant land’.

The play is way to excessive. Three Acts sort of wear people out. As they might say in Enland – “It’s not my cup of tea.” However, some (especially) hippies will find it to be divine.

The play has received rave reviews around the world. And it has been a hit in many countries.

BY: Jez Butterworth
Directed By: Bill English
(still the master of his craft)