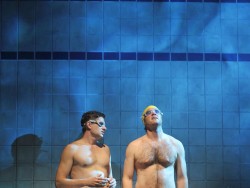 DEVILISH ACTING IN A HELLUVA PLAY

FINDING A FUNNIER FOURSOME ON STAGE WOULD SEEM TO BE AN IMPOSSIBLE TASK — BUT NOT FOR THE AURORA THEATRE, THAT HAS FOUND FOUR VETERAN ACTORS WHO ARE JUST BRILLIANT! In “Jack Goes Boating,” four souls find and lose themselves, as they agree to disagree in this romantic comedy. There is Jack, who hasn’t had a date in years, maybe because he has his hair in newly acquired dreadlocks. It doesn’t look like a professional job. Jack may be missing a few drawers in his head also, but he has a heart of gold. Yep, he’s a big lug, but a loveable one.

Jack finally gets his first date with Connie who is a friend of Lucy, who is the girlfriend of Jack’s friend. Jack will do anything to make this date work, even if it means learning how to cook. Connie is just as awkward as her dread locked wannabe boyfriend. He invites her to have dinner out; she would rather have dinner at home. “No one has ever cooked dinner for me”, she says. So Jack learns to cook from a guy who has questionable credentials. Jack is so loveable and klutzy that he forgets to take the price tags off of the oven cloves.

In many ways this play is like a ‘Seinfeld’ segment. The halted dialogue and the crazy meaningless situations are just hysterical. And like ‘Seinfeld’ – it is a play about something that is nothing. When Jack finally does get Lucy to go to bed with him – she announces: “I’m not ready.” He looks puzzled. –“I’m not ready for Penis penetration,” she blurts out. But that lasts only for a few minutes. She later changes her mind and decides, that indeed – she is ready.

The thing that keeps this boat from going under water, are the fine talents on the stage. It is this absolutely perfect cast that makes it the rollicking salute to love that it is. Also very funny is the addition of cell phones that ring at various inconvenient times. Yes, it’s a Cell phone world.

AT THE AURORA THEATRE

SALLY KELLERMAN AT THE RRAZZ ROOM

She has a Garbo like voice. Low and smooth is the sound that brings to mind heart broken dreamers and visions of the unloved or lonely. Her breathy songs are mellow, jazzy, lush and easy. Kellerman is a master at phrasing and always sounds fantastic.

I would love to tell you what she might sing during this visit at the Rrazz room — but I won’t actually know that until opening night. I’ll just sit back and be surprised. Music today sometimes is hard, and way too loud to enjoy, but with Kellerman, what you get are lush and warm interpretations of great songs.

You probably remember her as “Hot Lips Houlihan in Robert Altman’s “M*A*S*H. Kellerman was nominated for both an Academy Award and golden Globe Award for that film. From Carnegie Hall to The Metropolitan Room in New York, Sally has kept the audiences enthralled with a contemporary mix of jazzy blues and adult standards with an occasional soulful rock number. I think you’re gonna like it!

Leslie Jordan stepped off a Greyhound bus from the hills of Tennessee and said “hello” to Hollywood. “And, I’ve never looked back” – he said. You’ve seen Jordan on “Will and grace”, “Boston Legal” – “Ugly betty” and hundreds of other TV shows. And of course, he has lent his twisted wit to the stage. Most notably the hit play “Southern Baptist Sissies.” And hey, he also writes. His book, “My Trip Down the Pink Carpet”, is now selling in bookstores. Jordan last performed to sold-out audiences in San Francisco in his show “Like a Dog on Linoleum”. He has also performed that solo show in other major cities. And wait – it doesn’t stop there. Jordan’s screenplay “Hysterical Blindness and Other Southern Tragedies That Have Plagued My Life Thus Far” — had a successful Seven-month run on Off-Broadway.

His new show at the Rrazz Room is called “Full of Gin and Regret”. Yep – that’s Leslie Jordan.

At the Opera in La Traviata Anna Netrebko. Photo by Corey Weaver.

GRAND TIER AT THE OPERA

WHAT COULD BE MORE DRAMATIC THAN VERDI’S LA TRAVIATA? NOTHING IS THE ANSWER! Especially with internationally renowned soprano Anna Netrebko as the glorious Violetta (a role she shares with Elizabeth Futral and Ailyn Perez.)

Domingo’s wildly acclaimed production, which premiered in Los Angeles in 2006, updates Verdi’s La Traviata with art deco costumes and sets. This story about a conflicted courtesan, her devoted lover and his disapproving father is timeless. Donald Runnicles will conduct the emotionally popular score in his final performances as the Company’s music director.

Anna Netrebko is a 1996 alumna of the Merola Opera Program. She made her United States debut as Lyudmila in San Francisco Opera’s 1995 Ruslan and Lyudmila. Although she has been Violetta around the World and applauded everywhere for her performance in Traviata, this will be the first time she has played the role on an American Stage. And the critics have been raving.

The San Francisco Opera’s Summer Season has been enjoying strong box office sales and has not only attracted bay-area ticket buyers, but also all those from throughout the country and around the globe. So, if I were you – I would get your tickets soon, because the last few performances left may sell out before you know it. To find out about ticket availability call the Opera Box office at 415-864-3330. If sold out – ask about returned tickets that might be available.

The Jose Iturbi Foundation was created as a nonprofit organization in 1985. The inaugural year of the competition was in 2007. That year the winner of the first prize vocal division award was former San Francisco Opera Adler Fellow and Merola Opera Program participant Karen Slack. Pianist Jose Iturbi was a huge star in the 40’s and 50’s as a main stay in seven MGM musical films. His legacy lives on with this foundation.