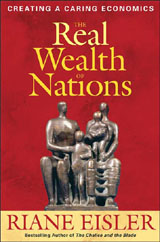 The term “caring economics”, on the other hand brought up a lone entry from the vast information archives of Google’s news: a book review of Riane Eisler’s newest masterpiece — The Real Wealth of Nations: Creating a Caring Economics. If everyone who wants to live in a more just and equitable society would read this amazing book, “caring economics” might just become a household phrase. The world would certainly be a better place if future Google searches returned millions of entries for this important term.

Caring economics is a multi-faceted term embracing a host of values and systems, both micro and macro, that would make the world a healthier, saner, more equitable and just place to live. Caring economics, for example, recognizes whole sectors that currently go uncounted or under represented, such as the unpaid community and household economies.

Most fundamental to Eisler’s multidisciplinary analysis is that caring economics is premised on, strengthens, and encourages a “partnership”, as compared to a “dominator”, model of society. Those familiar with Eisler’s earlier works will recognize the terms. Premised on notions of gender equality, the ideas of partnership vs. dominator go well beyond who cooks dinner.

Partnership systems are marked by community, caring, and meaning, none of which can be fully realized in societies that are dependent on top-down and in group/other domination. For decades Eisler has been developing the concepts and contours of partnership and dominator as the most important lens through which to evaluate various relationships. Ideas of religion, politics, sex, culture, and now economics have benefitted from Eisler’s partnership / dominator paradigm.

Trained in law and sociology, with a life long, self described focus in systemic cultural transformation, Eisler is truly a visionary thinker who defies categorization. Those unfamiliar with her work will be well served to start at the beginning with her 1988 international bestseller The Chalice and the Blade.

Reading that book, like reading her new one, is guaranteed to bring about hundreds of “aha” moments: not just “why didn’t I think of that” but, more importantly, “wow” – I didn’t know those two things were connected.

Or “hallelujah” someone is finally making sense of the seemingly random forces that comprise modern and ancient life.

The Real Wealth of Nations is well documented with examples of caring economics in action across the globe. (The former president of Iceland has the first blurb in the hardcover edition.) Eisler has footnotes for every issue, and, as a person wedded to the partnership model, she is geneours in giving credit to other authors, organizers and thinkers and studies.

This strength may also be the book’s only weakness: it is so chockfull of information that it is sometimes hard to incorporate all the wisdom Eisler has to offer. Eisler herself appears to recognize this, adding charts, diagrams, and frequent chapter summaries to simply and clarify her message.

These additions to the text are worth the price of the book alone.

Visionary, yes. But Eisler offers practical actions, large and small, that individuals can undertake to bring a partnership, caring model into various aspects of their lives, the lives of others, and society as a whole. The end of the book cites organizations that are bringing a partnership orientation to the fore in fields ranging from child welfare to environmental justice. There’s even a subheading “What Each of Us Can Do.”

Riane Eisler’s stunning new tour de force is a must-read for anyone who thinks about how to make the world a better place. The Real Wealth of Nations: Creating a Caring Economics leaves no stone unturned in analyzing why our current modes of economic thinking must give way to a caring based, partnership model of society.

Eisler is so convincing, and so thorough in her research and analysis, you’ll be shocked that anyone can still care whether the Dow Jones Industrial Average is up or down.

Lainey Feingold is a disability rights lawyer in Berkeley who tries to practice law with a partnership orientation. She can be reached at lfeingold@earthlink.net