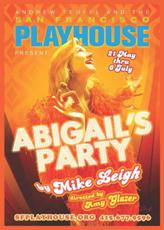 THIS PARTY IS SUCH FUN. One of Beverly’s guests asks: – “is it real silver?” Beverly swings around the room in a provocative sexy dress – “Yes – it’s Silver Plate!” Now that’s high class – don’t you think? Beverly (Susi Damilano) sure is a Blonde Hottie. Watching this show is like watching a steam bath.

Beverley is putting on a Record. She’s swishes around the room to the tempo of the music at the beginning of the play. Her ample bosom is showing a lot of cleavage. This is the time of the 70’s when you played records on a phonograph. Bev poors one drink after the other – waiting for her guests. She waltzes around the English furnishings. Bev loves to touch the furniture and fluffs up the pillows. She surveys the domain. All hers of course. But, we get the idea that she is planning to rope in a love affair, right in front of her husband. How many Bev’s have we seen before? Many, Many and many. This one however is very overt. She has everything planned for the “Party” and more.

What starts out to be a supposedly enjoyable party, soon becomes a hilarious and curious disaster. Everyone at the Party is at Bevs command. She seems to have everything in her control – but events are about to take the wrong turn.

The play was designed for British audiences – but soon has become one of the biggest hits of all time on the stage and film. And Beverley is the main star — she knows who to shove in the corner. She doesn’t even mind making a fool out of herself in front of one of the male guests. Bev doesn’t care about the male guest even though they practically have sex in front of everyone.

This 70’s play shows us the reality of class and pride in the 70’s. But the great thing about this show is that it is anything but annoying. After all — who wouldn’t be fascinated as Bev dances around as she puts out snacks all evening. Have another Drink? – Bev asks. And she will give you one whether you want it or not. She Drinks a lot. Her Green Satin Dress turns the men on as they contstanly look at the very deep “V” cut on
her Green Satin Gown. Bev takes another drink. Someone asks her is she plans to have kids. Bev says: “I like kids, but I wouldn’t actually like to have them. “All that Breast Feeding – it would kill me!”

Beverly bends over “Tony”, as she brings another drink. He is married and not to Bev. She bends over to make sure that Tony gets a good look at the cleavage. And he does – as his wife gives a strange look at whats going on. Oh my yes – this is a lovely evening. You might say that this is a party from Hell. But, what a delicious one.

This play at the SF Playhouse has put together a “High-Voltage” evening of laughter. The cast is unforgettable and charismatic. Bev is dominating (Susi), and the rest of the cast put on an effortless and spellbinding extraordinary show.

“You won’t want to miss this audacious and divine Madness on this glittering evening of non-stop laughter!” “It’s sparkling style and chic hanky-panky!” Who needs a Bar Stool – when Bev shakes her booty?” :