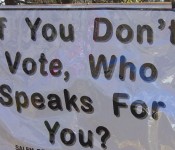 For over 30 years many of us have engaged in a dispute with our political party. Not over values; but over tactics. The dirty little secret is that Democrats should never lose an election. There have always been more Democrats than Republicans and if we got a majority of those people registered and turned out to vote; we can’t lose.

But for years the major emphasis of our party strategists among the DNC, DSCC and DCCC is to compete for almost nonexistent swing voter by utilizing our resources to persuade people. One can only weep for the millions of dollars wasted on persuasion campaigns that were lost, that should have been won if the money had been spent correctly.

There is a bias among professionals and pundits that money wins campaigns. If that were the case we would have President Romney and Governor Whitman. Money is a tool that can help; but only if it is spent correctly—and it is not the sole determining factor of political contests.

Moreover, Democrats must compete everywhere to win. Democratic strategists have often let “safe” republican candidates run without opposition in their districts—even when they are vulnerable.

Howard Dean’s 50 State Strategy in 2008 saw Democrats take the House of Representatives. Abandoned in 2010, the “triage” strategy was implemented by the DCCC and the results were predictable. What is worse, Democrats lost so badly that Republicans won state houses and Governorships. The result was that they controlled the redistricting of Congressional seats. In 2012 one million more votes were cast for Democrats than Republicans in House races, yet because of the gerrymandering Republicans have a 33 seat majority. This is democracy?

Most pundits are expecting Democrats to lose more seats in the House in 2014. The republicans have their lowest public approval rating in history, how could this happen? Because Democrats are utilizing the same old tired methods that saw us lose in 2008. We have not utilized our resources well, we continue to choose only targeted seats to compete, we allow some Republicans a free ride and we wonder why we lose? It is the definition of insanity.

Why don’t we target Eric Cantor? The professionals will tell you he is in a “safe” district. Look at his numbers; in 2006 Cantor won with 64% of the voter; in 2008 he won with 63% of the vote; in 2010 he won with 59% of the vote and in 2012 he won with 58.4% of the vote. But he hasn’t had a well -financed opponent in any of these elections. But he has raised millions of dollars he never had to spend on his own race to help other Republicans around the nation. Do you think if we make Mr. Cantor do a little work in his own district we could pick up a few of those districts that used his resources?

The Republican brand is dying, why are Democrats playing defense? This is because the majority of our voters don’t show-up in midyear elections. If the Democrats put their resources into candidate recruitment, voter registration and get out the vote instead of obsolete, mind-numbing political ads they would do much better at the polls. And if they competed in every congressional district forcing Republicans to defend the indefensible, we would increase our chances of winning important statewide elections.

On the flip side of the coin, Democrats also ignore safe seats. If a Democrat is going to win easily in a House race, why should we get out the vote in that area? We should because statewide elections are important too.

In 1986, we faced the same myopic thinking that challenges the current Democratic leadership. Senator Alan Cranston was up for reelection, and tasked with turning out the statewide vote we put together a Get Out the Vote plan that encompassed the entire state.

One Democratic legislator called and told us to “get out of her district”. She wanted all of our resources to go to a “swing district” so her legislative leadership position would remain secure. We respectfully declined.

Her district turned out in greater numbers than ever before in an off-year election and she was reelected. More importantly, Cranston was reelected statewide because of the turn-out statewide.

It is imperative that Democrats recalculate their strategy and begin to compete in all districts and turn voters out heavily in their own districts. Then we will not only pick-up House Seats, we will insure a Democratic Senate.

Rich Robinson, is a political strategist and communications specialist.

This piece first appeared in The Left Hook, thelefthook.com