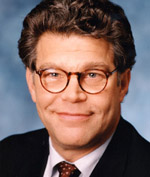 Yesterday, comedian Al Franken made it official that he will run in 2008 against Minnesota Senator Norm Coleman. There is no Republican who I want to see defeated more than Norm Coleman – who challenged the late Senator Paul Wellstone in 2002, and only won after Wellstone tragically died in a plane crash. Franken formally announced by video on his campaign website, and acknowledged that voters should be skeptical about whether a comedian could be a serious politician. He spoke from the heart about growing up in Minnesota, what issues he passionately believes in, and that Paul Wellstone was his “political hero.” But it’s still unclear if Franken really deserves to get Paul’s Senate seat. Is it reasonable to have a media celebrity “rescue” Democrats from Norm Coleman, and is Al Franken really that progressive anyway?

Paul Wellstone was the most outspoken progressive in the U.S. Senate, an incredible grass-roots organizer and a relentless critic of the Bush Administration. Norm Coleman is a cynical opportunist who switched parties from Democrat to Republican out of expediency – a “hollow man,” said Garrison Keillor, who “sold his soul for a Senate seat.” In 2002, the White House wanted to get rid of Paul so badly that Dick Cheney personally called other Republican candidates and told them to drop out – they were clearing the field for Coleman, he said, because it was too important to “defeat Paul Wellstone.”

Coleman ran a vicious slash-and-burn campaign against Paul Wellstone, calling him a “joke” of a Senator. On October 25, 2002 – with just eleven days to go — Paul died in a plane crash with his wife, daughter, three campaign staffers and two pilots. Minnesota progressives were devastated, and no one could be blamed for suspecting sabotage. The Democrats picked Walter Mondale as a last-minute replacement, and more than 20,000 people attended a Service six days before the Election. Of course they got angry and emotional, as the Memorial Service became a rousing call for passionate progressives to fight for Paul Wellstone’s legacy and get out the vote on Election Day.

I will never forgive Republicans for how they attacked the Memorial Service. Through lies, hypocrisy and fabrication, they went on the offensive the next day and accused Democrats of “politicizing” Paul Wellstone’s death. They were “shocked” that Paul’s sons had asked the Vice President not to attend – but if you died in a tragic plane crash, would you want Dick Cheney to attend your funeral? They raised such a media frenzy that it worked — on Election Day, Coleman was elected. Five months later, Norm Coleman had the nerve to tell a Capitol Hill reporter that he was a “99% improvement” over Paul Wellstone because he got along better with President Bush.

It was infuriating to see so many Democrats apologize for the Memorial Service, as it drove the media narrative that Wellstone supporters were “out-of-line.” But in his book, Lies and the Lying Liars Who Tell Them, Al Franken wrote the most eloquent and powerful chapter I have ever read about what transpired. In 29 pages, Franken shared the anger and outrage that so many of us felt about how we were never really given the chance to properly mourn Paul’s death. Calling it a “Case Study in Right-Wing Lies,” Franken rebutted every fabrication that was sent out through the right-wing noise machine in the days after the Service that tragically changed the Election’s outcome. On a gut level, there’s a certain poetic justice about having Al Franken be the candidate in 2008 who defeats Norm Coleman.

Most people know Franken through his decades of being on “Saturday Night Live.” But he left the show ten years ago, and has been increasingly vocal about his Democratic politics since. Armed with a sense of humor that gives his political commentary a biting potency, Franken has written four books and helped launch “Air America” — a liberal talk-radio station. Despite living in New York for years, Franken was raised in Minnesota and moved back two years ago. He started a political action committee called the Midwest Values PAC (which raises money for Democratic candidates), and now says that he’s ready to represent Minnesota in the U.S. Senate.

For a state that elected Jesse Ventura, having a comedian doesn’t sound off-the-wall. With Franken’s home-state credentials and Minnesota roots, the “carpetbagger” label doesn’t stick. But I have two issues with a Franken candidacy that make me reluctant to support him, and whether having him be the Democratic nominee is really a good idea.

One is the concept of the celebrity candidacy, and whether that’s a healthy thing for progressives. In recent years, progressives who were anxious to defeat a despicable politician resorted to getting a larger-than-life figure to overshadow the competition and deliver an electoral victory. We’ve seen this happen here in the Bay Area – where Willie Brown, Jerry Brown, Tom Bates and Ron Dellums all came back home to “save” their city. In the worst-case scenario, they have backstabbed progressives and done nothing to promote a new generation of local talent.

Minnesota is a blue state with a strong Democratic Party, and there is no doubt in my mind that lesser-known candidates can step up to the plate. In 2000, when Hillary Clinton decided to run for the Senate, many New York Democrats who had thought about running tragically dropped out to clear the field for her. Paul Wellstone was not a celebrity when progressives recruited him to run for the Senate, and it makes more sense to get a new candidate to run from the “grass-roots.” The celebrity candidate is tempting, but is it really a wise move?

Despite rhetoric that would make him a “liberal” Democrat, along with his hilarious jabs at Republicans that keep us amused, it is clear that Al Franken is no Wellstone when it comes to the issues. Franken supports universal health care and is “warming” to the idea of single payer, but he also says that he would have voted for NAFTA. He says that in retrospect he would work to “fix [NAFTA] and get more environmental and labor standards put into it,” but that’s hardly a comforting thought for many progressives who fear globalization.

But doesn’t refusing to support Franken because he is less progressive than Paul reek of self-righteous purist liberalism? I personally disagreed with Howard Dean on a variety of issues, but I strongly supported his presidential campaign because of what it meant for pushing the Democratic Party. In 2006, progressives wanted to see Senator Rick Santorum lose more than any other Republican that they rallied behind his Democratic opponent, despite his less-than-stellar politics. In some cases, the ends justify the means.

However, Franken’s bigger problem is where he stands on the War in Iraq. He supported the invasion in 2002, and even attended a pro-war rally by Clear Channel (although he admits in one of his books that it was a mistake.) As recently as June 2006, he said that he “agreed with Bush” on the issue of withdrawal – long after Congressman Jack Murtha had come out in favor of leaving Iraq. Franken attacks Bush for lying about the War, but as far as I can tell, his position on Iraq is not that different from Hillary Clinton.

Not only will Franken’s position on Iraq depress anti-war progressives, it is really bad politics as the War continues to get more unpopular. We might forgive Franken for not matching Paul’s progressive record on other issues, but the defining issue in 2008 will be the question of Withdrawal. Unless Franken unequivocally renounces his earlier position on the War, and begins to take a strong stand on withdrawal, he won’t deserve progressive support. After all, Paul’s last act in the Senate before he died was to vote against the Iraq War Resolution.

I’m withholding my judgment on Al Franken, and whether he should be the candidate to take on Norm Coleman in 2008. It would be nice to have a home-grown candidate like Wellstone who came from the grass-roots, but Franken’s celebrity status may be what it takes to get rid of Coleman. While Franken is no Wellstone when it comes to the issues, progressives could still get behind him if he offers enough of a bold progressive vision to deserve support. And right now, he’s got work to do on where he stands on Iraq.