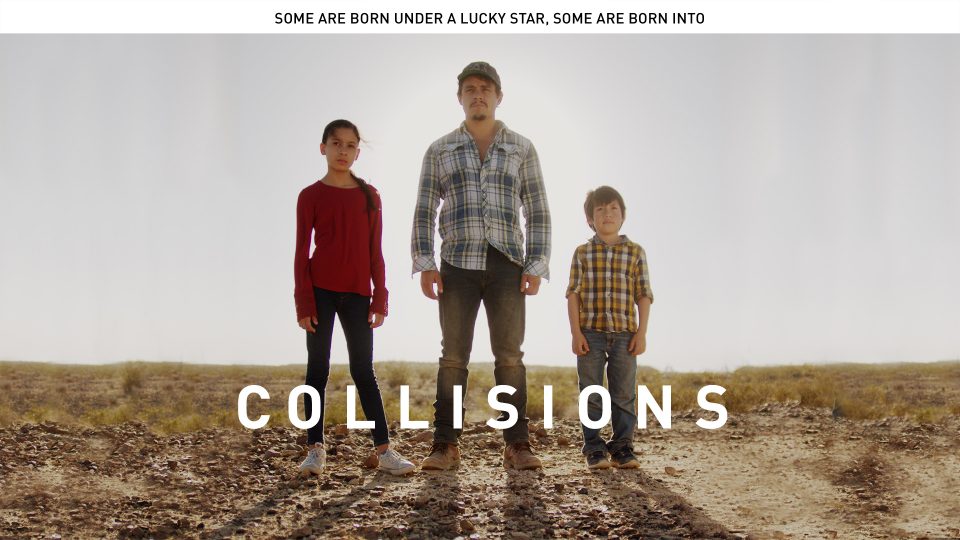 Richard Levien, “Collisions”’ writer/director, is of average height and build, at least in his mid-40s, and possessed of dark blonde hair.  What strikes a person on talking to this New Zealand immigrant is his politeness. He doesn’t use courtesy as a finely honed weapon but as a medium for acknowledging he shares the planet with others with far different social and emotional backgrounds from him.

“Collisions” is this local filmmaker’s feature film debut.   It took a number of years before the pitch that earned this Mission District-based filmmaker the first of four SFFILM/Kenneth Rainin Foundation grants finally became an actual movie.  “Collisions” still remains relevant because the realities it dramatizes have only worsened with the change to the Orange Skull’s presidential administration. Film festival tours have netted Levien’s film several awards, including an S.F. IndieFest Audience Award.  Now “Collisions” finally makes its theatrical premiere at the Roxie Theatre on November 8, 2019.

The film’s story concerns Itan and Neto Bautista.  They’re two American-born children who live with their undocumented mother Yoana in San Francisco’s Mission District.  When an ICE raid scoops up Yoana, the kids’ nearest relative is their semi-irresponsible uncle Evincio. A desperate attempt to stop Yoana’s deportation or even find her sends the children and their uncle on a cross-country trip.

Curiosity about the odd behavior of a real-life student influenced the development of what became “Collisions.”  Levien’s wife had a third-grade student who previously showed herself to be bright and engaged. Now this girl was somebody listless and short-tempered.  Why? The eventual answer: the arrest and deportation of her father.

Years have passed between the time Levien first met this girl and the Roxie premiere.  Has this real-life student seen the film? The director says, “No, she hasn’t. My wife still runs into her from time to time.  I haven’t rushed her into seeing it because I was afraid it might be triggering.” The realization that this student is probably by now in high school or college gets the director musing about approaching her regarding seeing “Collisions.”

Indeed, conversations with students whose parents were deported provided some of the real-life details Levien incorporated into “Collisions.”  Other sources of information that Levien drew from included “reports from Human Rights Watch, Amnesty International, and the New York Times.”

One particular part of the initial story pitch for “Collisions”’ eventually got altered.  The director says “The original helper character was an anti-immigrant minded substitute teacher.  But we (Levien and co-writer Maria Alegria) felt it made more dramatic sense to have the helper character be more intimately tied to the two children.”

The new helper character, Uncle Evincio, does provide that intimate connection and more.  “Collisions”’ director described Evincio as “a bad immigrant. He’s redeemable but he’s made a ton of mistakes.”  The semi-irresponsible uncle’s presence pulled the film away from having a uniformly virtuous depiction of immigrants.  Ironically, says Levien, the current “immigration system worked for him, but he’s a borderline criminal.”

Evincio and Itan’s resulting clashes in fact provides a good chunk of “Collisions”’ dramatic momentum.  Levien describes the duo’s relationship as “a reverse coming of age story. Itan is prematurely adult from the first frame of the film.  Evincio is a child who hadn’t grown up. Itan teaches Evincio about taking responsibility while Evincio teaches Itan about loosening up.”

Levien describes Itan as becoming “angry as hell” as a result of the events of this film.  However, “she still sees America as her country.”

In retrospect, Itan’s reaction to the film’s events could have been a lot worse.  Levien’s research included a 50-60 page report of the effects of forced deportation on the children who remain that’s “just heartbreaking to read.  Grades plummet. They can’t sleep. They’re more irritable.” In more serious cases, kids develop “eating disorders or suicidal thoughts.” With the loss of the family breadwinner, the kids left behind are “propelled into a more precarious situation.”  One example of this is “kids being placed in the care of relatives who might not be the parents’ first choice.”

A cruel irony, which wasn’t included in the film, results in the ICE raid that sets the story of “Collisions” in motion.  As Levien explains, “Yoana had applied for a green card and was waiting for approval. Sending in fingerprints is part of the application process.  ICE did a fingerprint check and turned up Yoana’s old shoplifting conviction.” The resulting raid feels particularly callous once the viewer learns what Yoana stole and why.

“Collisions”’ viewers’ opinion of ICE only worsens with two particular incidents in the film.  Why did guns need to be drawn to arrest a woman wearing only a bathrobe? And why did Yoana’s insistence on making a phone call to let Itan and Neto know where she was merit her getting thrown into solitary confinement?  It’s disturbing to hear Levien characterize these film incidents as “middle of the road.” But then he’s read about more serious detainee fates such as sexual abuse or dying in custody.

The director sees a small upside in dramatizing Yoana’s telephone problems.  He says, “I think 90% of even folks supporting detention of undocumented immigrants would agree that detainees should have a guaranteed phone call.  Such people would be surprised to hear that in private prisons, there is no such guarantee. Delays of days or even weeks before detainee phone calls are allowed are common.”

“Collisions”’ director describes telephone access problems in private prisons as symptomatic of the looser quality standards that lead to horrific experiences for detained immigrants.  The elimination of for-profit prisons is to him an essential first step for reform.

The ICE personnel portrayed in “Collisions” are not treated in the film as an inherent part of the problem.  The viewer does see the occasional ICE agent doing little things to try to help the Bautistas, such as a failed attempt to at least delay a deportation van.  This portrait is by Levien’s design, as “I tried to not make the ICE agents inhuman. I think only a small fraction are bad people.”

The director’s real ire is reserved for the deportation system the ICE agents work in.  He thinks “the system is a machine designed to not treat people humanely. I’m shocked that detainees can be sent from San Francisco to a Texas prison in just two days.  Instead of treating detainees as people, the deportation system treats them as units that can be moved around without consequences.”

However, says Levien, “having a deportation process that’s humane by eliminating abuses is only a first step.”  Blocking the public rehabilitation of Kirstjen Nielsen and holding her accountable is too small a step. The director wants to see the previous president and his administration held accountable too.  He sees the only difference between the Orange Skull’s handling of deportations and that of Obama’s being that “the current president is more overt” about his aims.

Levien’s words on this politically sensitive topic show his politeness to good effect.  Mentioning Obama by name is more likely to close down viewer receptiveness than the director’s mentions of “the previous administration.”  That tactic fits in with his ultimate aim of “the fostering of conversations with all sides of the issue and finding points of agreement to get something done.”

The current political impasse in America over deportations and other immigration issues doesn’t dent Levien’s optimism.  “I think we’ll get there eventually,” he says. His own long term goal for resolving the immigration dilemma is having the rich countries take responsibility for bringing poorer countries up to the socioeconomic level of pre-nationalism wave Europe.  That way, when an open borders policy is reinstated, people freely crossing between countries is not a big deal. Levien isn’t starry-eyed about the enormity of such a task. He hopes all this can happen “in 100 years.” But such a project is more than a hopeful dream.  He says, “I don’t see any other alternative for the planet to survive.”