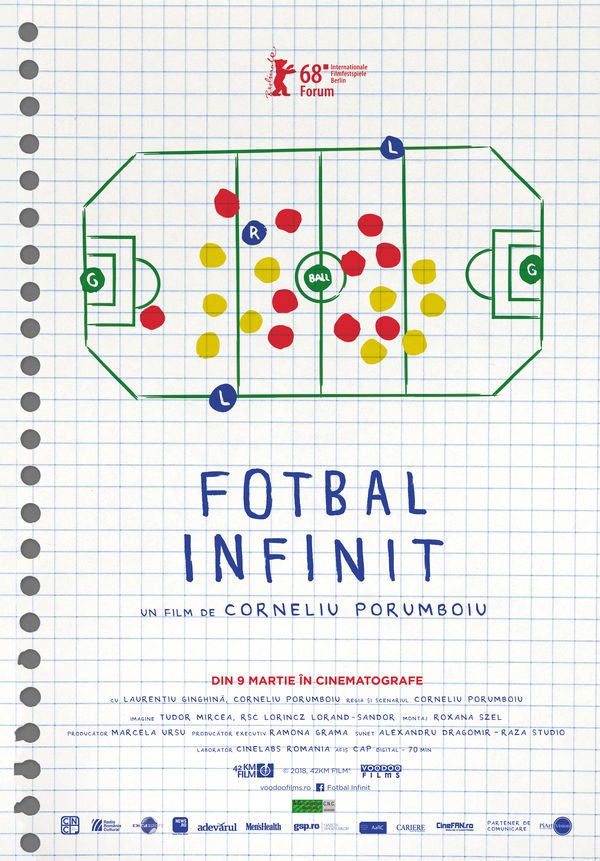 Could an octagonal playing field be an improvement over soccer’s current rectangular field?  That’s one of the ideas thrown out by self-styled soccer re-inventor Laurentiu Ginghina. This man who dreams of revolutionizing soccer is the subject of Cornelieu Porumboiu’s newest film “Infinite Football.”  Yet as Porumboiu’s documentary follows Ginghina’s attempts to interest others in his ideas, the film finds greater interest in teasing out the factors behind this middle-aged man’s obsession with such a quixotic project.

“Infinite Football” screens as part of a Pacific Film Archive film series dedicated to Porumboiu and his films.  Besides the new documentary, Porumboiu’s better known (in the US) films “12:08 East Of Bucharest” and “Police, Adjective” also screen as part of this film series.  Porumboiu himself will appear at all series screenings.

Ginghina’s ideas for re-inventing soccer share a common trait of unnecessarily complicating a fairly simple game.  He feels “allowing the ball to run free” by limiting players’ movements would make the game more interesting visually instead of the reverse.  His octagonal field proposal, inspired by Chinese and Japanese symbolism, makes sense only to those unfamiliar with how even corners are used in a soccer match.  Unsurprisingly, the one onscreen real world attempt at playing with Ginghina’s innovations shows that he’s invented a passable training exercise, but nothing more.

Porumboiu’s cinematic interest in Ginghina’s lifelong project definitely has nothing to do with the merits of the would-be inventor’s ideas.  It lies in teasing out the motivations behind this middle-aged government bureaucrat’s obsession.

Learning that Porumboiu’s subject suffered a never fully healed leg fracture during a soccer game may suggest self-interest plays a huge motivation in his foolish quest to re-invent soccer.  The hypothetical game he creates is one he himself would be able to play. Yet that idea soon gets dispelled during an interview sequence at his workplace. Ginghina helps a 90-ish woman navigate government bureaucratic blockages to find the current status of her decades-old land claim.  The 90-ish woman’s companion notes that other bureaucrats wouldn’t have bothered to aid her, yet Ginghina took the time.

Yet what’s more vital about understanding Ginghina’s obsessions are two personal experiences that shaped him.  A lonely walk back home on New Year’s Eve testifies to his willingness to meet a challenge thrust on him alone.  The other experience, his abortive attempts to work and visit America, show his unhappy acceptance of the barriers life places in his way.

Porumboiu doesn’t present Ginghina as an object of mockery.  It turns out Porumboiu is a friend of Ginghina’s family, and the bureaucrat himself is the brother of a friend.  However, that relationship doesn’t mean the filmmaker won’t place limits on his willingness to hear his subject propound his vision of an infinitely improved soccer game.

Nobody’s arguing here that soccer as currently played doesn’t need any improvement whatsoever.  Nothing is perfect in this world, even the beautiful game. But Ginghina’s obsession with “improving” soccer reflects the enthusiasms of someone who still quietly smarts from his collisions with the world’s defects.

Already in progress at the Pacific Film Archive is the “1968 and Global Cinema” film series.  The series is based on a new book of the same title edited by Christina Gerhardt and Sara Saljoughi.  The films presented offer examples of how the socio-political upheavals of 1968 became reflected in films around the world.

One of the already screened programs is “Out Of The Vault: Radical Shorts,” a collection of political short films.

Newsreel’s “Black Panther (Off The Pig)” still feels like cinematic fuel for a thousand white bigots’ nightmares.  The film’s images of the Panthers marching with steely determination and organization would have traumatized whites more comfortable with images of blacks being deferential and/or unaggressive.   The present day viewer can still feel an electrifying sense of non-negotiability with the Panthers’ seizure of personal dignity and their unapologetic claims of entitlement to the pieces of American society long denied them.

The Panthers’ willingness to kill cops would set off aneurysms among those who wring their hands over Black Lives Matter.  On the other hand, given that cops have historically and successfully intimidated the black community, a declaration of “off the pig” delivers a statement of reclaiming personal power in defiance of state intimidation.

The line that memorably closes the film “Hands up, m____ f____!  We’ve come for what’s ours!” rejects gradualism or the idea of persuading whites to accept black equality.  It recognizes that what advantages whites accumulated at the black community’s expense will not be given up willingly.  It rejects the conciliatory avoidance of discomforting whites. Time has shown that what the Panthers’ contemporaries may have called uncivil behavior at least had the benefit of spurring urgency over black concerns.

The program’s other Newsreel short, “San Francisco State On Strike,” unfortunately falls flat by comparison.  There’s no denying the value of seeing a more sympathetic contemporary portrait of the San Francisco State University student strike.  It’s not likely contemporary local media was particularly kind to the protesters’ efforts. Supporters of the strikers, on the other hand, would see the crushing of disobedience in police breaking up of student protest groups and S.F. State President S.I. Hayakawa’s silencing of a protester’s loudspeaker.

Yet this film’s interest remains solely as an alternative historic record.  The struggle at the core of the university strike, structural educational inequity, never comes alive as a vital critical struggle.  Also, a little bit of the folk singer who appears frequently in the film goes a long and unfortunately grating way.

Charles Braverman’s “An American Time Capsule” turns over 180 years of American history into visual accompaniment to a jazz drummer solo over the course of three blink-and-you’ll-miss-it minutes.  Presidents, wars, conquest, crushing of non-white peoples can all be found here. Rather than some grand story planned from its first sentence, the American history captured in this collage of old paintings and vintage photographs turns out to be a product of happenstance as much as design.

Santiago Alvarez’ shorts manages to be highlights of the program.  “Now” turns the Civil Rights Struggle into something worth dancing to.  It helps that Alvarez makes good use of Lena Horne’s titular song, which sets its cry for civil rights to the tune of “Hava Nagila.”  The images of police abuse of Civil Rights protesters juxtaposed against Horne’s performance shakes viewers out of being complacent and disapproving of police brutality.

“79 Springtimes” sees Alvarez going for the biographical portrait.  His subject is North Vietnamese leader Ho Chi Minh. Rather than a scheming Communist dictator, Alvarez presents a simple ascetic man dedicated to the liberation of the Vietnamese from colonialism.  Seeing Ho wash his feet while on a hike or smoking a cigarette makes him a more human figure than the dehumanized villain peddled by American propaganda.

While the “Out Of The Vault” program may have come and gone, the Iranian film “The Cow” comes up next in the series.  Dariush Mehrjul’s film may seem like an outlier compared to other films in the series. Its story is set in a poor Iranian rural village.  Hassan lovingly tends the village’s sole cow. But when the cow suddenly dies while Hassan is away at work, the villagers lie about the bovine’s fate to spare him grief.  However, Hassan goes mad anyway and starts believing he is his cow.

Mehrjul’s film would deservedly become a key work of the Iranian New Wave.   It would be the first Iranian film to consider the struggles of small poor lives as worthwhile cinematic subjects.  The village and its routines, including weddings and even attempted sheep stealing, becomes a character in the film.

Hassan’s close relationship to his cow seems to foreshadow the deeper communion between man and beast that would mark a world slowly growing more ecologically aware.  Rendering Hassan and his cow as near similar blobs of light in the opening credits speak to a deeper relationship between the two creatures beyond what Hassan’s fellow villagers may understand.  When the film shows Hassan bathing his cow, the way he bathes the bovine feels far removed from someone washing down a prize car that has gotten dirty. Hassan’s later howls of grief seem more like the cries of someone who’s sudeenly lost their soulmate.   A powerful image of Hassan’s grieving face totally bathed in a shaft of sunlight captures a sense of the cow’s relationship to Hassan.

“The Cow” opens with the villagers’ tormenting a mentally retarded young man for public amusement.  That mistreatment foreshadows how unprepared or incapable the villagers are to handle Hassan’s own mental trauma.  Unsurprisingly, tragedy results.

The “Cintetracts” program, by contrast, feels more intellectually dense than the fable-like Iranian film.  These roughly two minute and forty seven second shorts range in style from political documentary to sophisticated wordplay to cultural critique.  Yet unless a viewer is proficient in French (or has access to a subtitled print) and is familiar with the cultural milieu in which these short films were made, it’s very likely that the wash of images in this program will leave such viewers confused or, worse, indifferent.

These silent French shorts were made during 1968’s wave of national strikes and student uprising.  According to the Pacific Film Archive program notes, the collective that filmed these tracts included among their number Jean-Luc Godard, Philippe Garrel, and Alain Resnais.   What they captured on camera ranged from images of street battles between the police and protesters of various stripes to ads repurposed for cultural commentary purposes.

Making these films as silent tracts made sense from a technical standpoint.  Without worrying about such problems as sound correction, these cinematic manifestos could be processed swiftly for quick exhibition to striking forces.  In these collections of street-level images of resistance, these images’ existence could be used to smash holes in bourgeois lies about the uprising. Seeing street barriers made from assembled furniture or paving stones turns “to the barricades” from catchy dramatic cry to revolutionary call to arms.

However, whatever revolutionary fervor or criticism is stirred by these images, that feeling fades given lack of knowledge of the points being made or the people being referenced.  “CineTracts” becomes, then, little more than a cinematic curiosity for the average viewer. (The “Cine-Tracts” screening will be shown with English subtitles)

For a better cinematic revolutionary experience, the discerning viewer should turn to the rediscovery of Larry Clark’s “As Above, So Below.”  Here, one can find government repression, Uncle Toms, revolutionary cells, and even deja vu.

The dramatic set-up involves returning Vietnam Vet Jita-Hadi.  The ghetto that he’s returned to is in a state of near lockdown thanks to a revolutionary group’s successful raid on a National Guard armory.  Unsurprisingly, his path will cross that of the revolutionary group.

The thriller plot involving the revolutionary group feels more of an afterthought than one of those beginning-middle-end tales.  Clark’s real focus is his acerbic look at those happy to go along with the governmental program. Particularly contemptible is Peewee, whose bragging about his huge debt to the White Man makes Uncle Tom look like Malcolm X.  A cafe owner who is heavily religious seems moved more by the local preacher’s semi-orgasmic sermons than Christian tenets.

Clark’s treatment of revolutionary action isn’t interested in providing gratuitous entertaining thrills.  As the film shows Jita-Hadi carefully moving through a snowy forest, it subtly suggests being a revolutionary requires adopting a mindset of resistance rather than treating resistance as a role which can be shed like a suit.  If the film lacks a formal ending, Clark suggests it’s because there’s always some new oppressor to fight.