In Denver, Democrats Became a Party 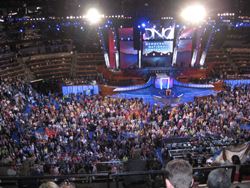 Despite Will Rogers’ fabled quote from that “I don’t belong to any Party. I’m a Democrat,” during the New Deal years the Democrats were a political party with a clearly defined base. For decades, however, the Democratic Party during presidential election years took direction from its nominee. This meant that when the voters nominated candidates like Jimmy Carter, who had few ties to the Party’s major institutional constituencies, the “Democratic” President governed without regard to the Party’s broader interests. This also occurred after “New Democrat” Bill Clinton’s election in 1992, with neither organized labor nor environmental groups securing major influence despite the Democrat’s victory (a scenario that changed in the 1996 campaign). But Denver and the 2008 primary season has changed this situation. The connection between the Party, its core constituencies, and those it elects in the party’s name has been solidified, which bodes well for implementing progressive proposals in 2009.

What is striking about the Obama-Biden ticket is how these politicians represent the major wings of the national Democratic Party. This was not true with Clinton-Gore, which ignored the party’s progressive wing, and did not occur with Kerry-Edwards, which many felt ignored moderate/conservative Democrats.

And the representative nature of Obama-Biden is reflected in the faces of those who came to Denver to support the ticket.

African-Americans and women are broadly present among the official delegates and those supporters attending events at the Denver Convention Center. Native Americans, union members, Latinos and gay and lesbian activists are also a major presence. While white males were more seen inside the Pepsi Center—since they are disproportionately the big donors rewarded with guest passes—those who came to Denver on the Party’s behalf largely reflected the Democratic base.

I was surprised by how many people came to Denver who were not delegates or members of the press, but simply wanted to be here to support the ticket. On Wednesday night at the Pepsi Center I sat next to supporters from Arkansas and Alabama who had no credentials of any sort but just wanted to be part of the experience (of course, the fact they found a way to get seats in the arena helps explain the chaos of overbooking that occurred that night, when people with legitimate passes were unable to get seats nearly an hour prior to Bill Clinton’s speech).

“Unity” means more than the Clintons’ backing Barack Obama. It means creating a Party whose politicians are loyal and accountable to the base, rather than triangulating or running against these core constituencies.

And for all of those who accuse me of constantly criticizing the former President, he almost fulfilled my prediction of giving the most politically important speech of the week. Consensus gives this nod to Hillary, though Bill Clinton galvanized the Pepsi Center crowd to such a degree that even I was standing up cheering for him!

Not since the 1972 McGovern campaign have many progressives felt comfortable identifying as Democrats. And it has not been since 1964, and before that the Roosevelt era, that progressives, organized labor, and voters of color were all excited and unified behind the Party’s nominees and goals.

The landmark racial justice component of Barack Obama’s nomination is getting most of the focus, but 2008 has also witnessed a major transformation of the Democratic Party.

Now all the Party has to do is win in November.