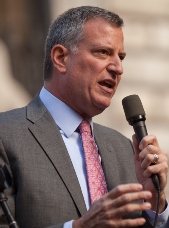 The NY Times lead editorial of May 6 described NYC Mayor Bill de Blasio’s plan to build or renovate 200,000 new housing units over the next decade as akin to a “Moon Shot.” But San Francisco Mayor Lee’s less heralded plan to create 30,000 new units in the next six years in a city with less than 1/10th of NYC’s population is even more ambitious.

I wrote last December that San Francisco Mayor Ed Lee has a progressive record that New York City’s new Mayor Bill de Blasio “would be fortunate to match.” We saw a good example of this when de Blasio announced a new housing plan this week that, while a great step forward for New York City, falls far behind what Mayor Lee is working toward in San Francisco.

De Blasio will spend $41 billion effort to build or preserve 200,000 affordable units over 10 years—120,000 apartments preserved and 80,000 newly built. Bay Area activists may be surprised to learn that NYC has no mandatory inclusionary housing requirements, a situation de Blasio plans to change.

Central to de Blasio’s strategy is a plan to increase height and density particularly for new housing outside Manhattan. The idea is to allow larger buildings in exchange for increasing the number of affordable units.

But those San Francisco progressives who idealize de Blasio while bashing Lee should take note: “Despite Mr. de Blasio’s pledge to ‘drive a hard bargain’ with developers, his plan contained few ideas that would rattle the real-estate industry.”

In other words, de Blasio is following Lee’s lead of working with those who build housing to increase production and affordability. In fact, if you look at the mayor’s housing campaign platform, it is remarkably similar to what Mayor Lee is already implementing in San Francisco.

If the San Francisco Chronicle ever credited Mayor Lee’s housing plan as having the ambitions of a “moon shot,” I missed it. In fact, much of the media and many activists act like 30,000 new units in five years is no big deal, based on criteria for success that no housing policy can meet.

,
First, San Francisco has a lot less space in which to build. Second, San Francisco voters can use ballot measures to stop housing projects, while NYC residents cannot. Third, NYC has a pro-development culture going back decades, while San Francisco has always had a significant and politically strong anti-growth political base.

Lee also faces a greater challenge in building new units due to the very troubled state of the city’s public housing. While New York City has also suffered from federal cuts that have damaged public housing nationally, its public housing supply has long been among the nation’s best while San Francisco’s is long troubled. This requires San Francisco to spend significant dollars on costly public housing renovations that deplete scarce housing funds.

Lee’s “Neptune Shot” (a planet far further from earth than the moon) is off to a good start. According to the city’s 2013 Housing Inventory, 2,499 new housing units were constructed in 2013. This is a three-fold increase from 2012, and 712 of the new units were aﬀordable.

The Mayor’s website has a Housing Meter where the public can check on the number of completed units quarterly. De Blasio should consider installing a similar meter, which puts pressure on all involved to keep new housing construction on track.

What’s impressive about both Lee and de Blasio’s plans is they are moving forward despite a lack of federal and state funding for affordable housing construction. While these two big city mayors reach for the stars, the Paul Ryan’s of the world refuse to allocate the resources necessary to solve the nation’s affordable housing crisis.

Randy Shaw is Editor of Beyond Chron. His new book is The Activist’s Handbook: Winning Social Change in the 21st Century