An Idea That Sticks: Another Plunger-Protected Bike Lane Goes Permanent 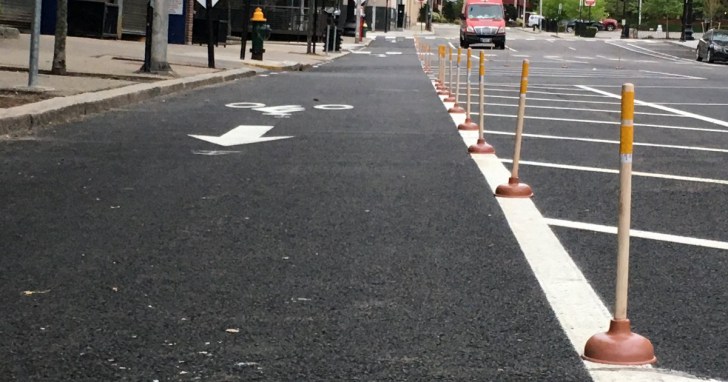 There’s been something in the air this spring. Can you smell it?

Two of 2017’s three cheekiest guerrilla bike lanes have now been made permanent.

The Providence Journal reported Tuesday that the city of Providence, RI, has taken a local group’s civic action to heart and started installing flexible plastic posts where a row of plungers had been set up, separating a “floating” parking lane from a curbside bike lane on downtown’s Fountain Street.

Similar plunger-bike-lane installations this year came in Wichita and Omaha. Wichita, too, made its short stretch of plunger protection permanent two weeks later.

Parking-protected bike lanes have become common across the United States. But practices differ on whether to include plastic posts. Posts cost about $60 apiece, including installation time, but they make it more obvious where people are (and aren’t) supposed to park cars.

The Journal reported that the new posts can be removed during the winter, if necessary, to keep the street plowed.

Organizer Jeffrey Leary, 49, told the paper he spent $72 on the Providence demonstration: $1 per plunger.

Martina Haggerty, a projects manager with the Providence planning department, said the city had always planned to improve the Fountain Street bike lane “incrementally” but that the plungers “certainly gave a new sense of urgency to it, which is great.”

“I think it’s a really effective way of bringing about change and bringing things to the attention of officials,” she said.

Meanwhile, across the continent in San Francisco, residents are conducting a slightly different campaign: They’ve literally been standing in the streets themselves to call attention to the number of people who try to pull across unprotected curbside bike lanes in their cars. That, too, has prompted local politicians to call for permanent physical protection.

Maureen Persico, a lead organizer of the San Francisco effort, said direct, fun local actions like these can be powerful during a time of national political turmoil because they can open a “little crack” in people’s walls of cynicism or isolation.

“It’s cheap, and it’s pretty easy to get people together,” she said. “And there’s a lot of people interested in the issue. Everybody knows somebody who’s been hit by a car.”

This piece first appeard in PlacesForBikes,  a PeopleForBikes program to help U.S. communities build better biking, faster. You can follow them on LinkedIn, Twitter or Facebook or sign up for their weekly news digest about building all-ages biking networks.