Ian Hunter Comes to the Fillmore 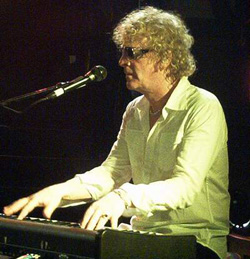 Singer, pianist and composer Ian Hunter is perhaps best known as the lead singer of the English rock band Mott the Hoople, from its inception in 1969 to 1974. Hunter would later embark on a solo career, often in collaboration with the Hoople’s guitarist Mick Ronson, well-known for his work with David Bowie. Among Hunter’s best-known solo records are “Once Bitten, Twice Shy” and “Cleveland Rocks,” made famous as the theme to TV’s “The Drew Carey Show”. This Friday night, Hunter and his Rant Band make a rare appearance at the Fillmore for one of only three shows in California.

The writer Campell Devine provides a bio on Hunter’s website for the “uninitiated”, “Born in Oswestry, Shropshire and fueled musically by the likes of Little Richard and Jerry Lee Lewis, Ian Hunter Patterson played in various bands throughout the sixties, including The New Yardbirds and, as a bass player, backed Billy Fury,Freddie Fingers Lee, The Young Idea and David McWilliams. He also worked as a journalist and staff songwriter for Francis Day and Hunter before joining Herefordshire band, Silence, in 1969.

Renamed “Mott The Hoople” by manic mentor and producer Guy Stevens, Hunter became the group’s vocalist, principal songwriter and focal point with visually striking corkscrew hair and omnipresent dark glasses. Mott recorded four crazed but critically-acclaimed and highly influential albums for Island Records and possessed enormous live prowess, but poor record sales led to a temporary split and a move to CBS/Columbia. With David Bowie’s ‘All The Young Dudes’ as the launchpad, Mott The Hoople hit superstar status between 1972 and 1974 – seven hit singles, four chart albums (including ‘Mott’ – still regarded as a seventies’ classic); they were the first rock band to sell out a week of Broadway concerts in New York’s theatreland, and Ian wrote his universally acclaimed book,Diary of a Rock ‘n’ Roll Star.

Various personnel changes in Mott The Hoople ended with the recruitment of the highly talented Mick Ronson as lead guitarist, but personality clashes and strains within the group resulted in its demise after Hunter suffered a physical breakdown in the USA. In spite of the considerable pleadings of their original guiding light, Guy Stevens, Ian traded the safety of Mott the Hoople for unknown and risk-laden solo territory.

On paper, the combined potential of Mott and Ronson was frightening and Ian’s first stunning solo album, recorded with Mick, illustrated the considerable opportunity that was missed. Hunter was soon trailblazing again and his second LP, released fifteen months later, whilst labeled commercial suicide, was soon mirrored by Sting after he quit The Police and issued his first solo records in a style reminiscent of ‘All American Alien Boy.’

Hunter continued to pool his vocal and writing expertise with Ronson’s instrumental and studio capabilities over the next fifteen years, both for recording and production work. The latter included Generation X, Ellen Foley, Hanoi Rocks and Urgent. By the mid ’80s however, Ian’s output was less frequent, being restricted to occasional songs for movie soundtracks, until he resumed his partnership with Mick in 1988, when they recorded and toured for the first and only time as ‘Hunter Ronson’.

Ian has been cited as a major inspiration and reference point for numerous bands including the Clash, Kiss, Def Leppard, REM, Motley Crue, Blur and Oasis. Hunter’s influence has remained incalculable; accompanied on stage by Ian Astbury of The Cult, Axl Rose and Slash, Roger Daltrey, Meat Loaf and Bryan Adams amongst others (and at their request), there are now over 50 different cover versions of Ian’s songs from artists as diverse as Great White, The Presidents of the United States of America, Status Quo, Blue Oyster Cult, Bonnie Tyler, Barry Manilow, The Pointer Sisters, Willie Nelson, Thunder and The Monkees – further evidence, surely, that he is one of our greatest-ever songwriters.

Freddie Mercury of Queen enquired of a former Mott member in the ’80s why Hunter had never reformed such a successful and influential group, a resistance which Mercury failed to comprehend. The clue is in the unprecedented diversity of albums such as ‘All American Alien Boy’, ‘You’re Never Alone With a Schizophrenic’, ‘Short Back n’ Sides’ and ‘YUI Orta’ which bear witness to Ian’s belief that artistic honesty and independence outweigh any commercial consideration whatsoever. It is also interesting to observe that so-called ‘greats’ such as Dylan, Springsteen and Elton John have issued their share of patchy albums over the years whilst the quality of Hunter’s recorded repertoire has never wavered from the very highest caliber and consistency.”

E. “Doc” Smith is a musician and recording artist with Edgetone Records, who has worked with the likes of Brian Eno, Madonna, Warren Zevon, Mickey Hart and many others. He is also the inventor of the musical instrument, the Drummstick. He can be reached via http://edgetonerecords.com/edoctorsmith.html