“I Heard That”: Toni Morrison and Angela Davis Come to Town

by Rochelle Metcalfe on December 3, 2008 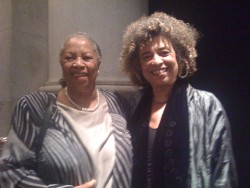 Sunday, December 7 celebrates another birthday that will find me out at the ‘STICK taking in the 49ers/New York JETS game. The date is remembered for the bombing of PEARL HARBOR, December 7, 1941, a day of INFAMY in U.S. History. The day my parents were celebrating my birthday when the startling news came over the radio the Japanese had attacked!

The start of World War II ended the Great Depression which began on ‘BLACK TUESDAY’ with the Wall Street crash of October 1929. I was born in the midst of the Depression – a time similar to what is going on today BUT WORSE – loss of jobs, people going hungry, FEAR. There were NO aids to help people like Unemployment insurance, food stamps, etc.

Amused to see President-elect BARACK OBAMA on the cover of a recent TIME Magazine portraying the style of President FRANKLIN DELANO ROOSEVELT, pretty good interpretation of F.D.R. with cigarette holder, riding in an open car. F.D.R. was in office during the height of the Great Depression, TURNED the country around with his policies – for one the NEW DEAL.

Obama takes office during difficult times similar to F.D.R.’s challenge. Americans are worried, FEAR has set in! Roosevelt helped American people REGAIN faith in themselves. He brought hope as he promised prompt vigorous action, and asserted in his Inaugural Address these famous words “THE ONLY THING WE HAVE TO FEAR IS FEAR ITSELF!”

These are critical economic times, this country is on the brink of a DEPRESSION – later for released news of RECESSION – many of us GOT IT A LONGTIME AGO!!!

The THANKSGIVING Turkey has long been digested, SCREAMIN’ home baked ROLLS, and memories of a delicious meal, and pleasant time spent at the Glen Park home of LUCRETIA BJORKLAND with her family and friends that included Blues writer DOROTHY HILL. Saturday morning the three of us were FIRED UP AND READY TO GO SHOPPING in San Mateo at the GEM and Jewelry Show held several times a year at the San Mateo County Event Center. Great to hangout doing what girls do – SPEND MONEY!

A lot of excitement in anticipation of meeting Ms. Morrison who is celebrating her NEW novel, entitled “A MERCY”. Such a gracious, soulful, down to earth beautiful SPIRITUAL LADY, momentarily free from stories lurking in her creative mind, ready to leap onto pages for all to read. Relaxed, gleeful, posed for pictures, autographed her book for those who came out to meet and greet her, sip champagne, wine and light hors d’oeuvres.

The illustrious artistic director Williams and Easter both happily smiled for the cameras, posed with Morrison, delighted over their partnership with PG&E (support), ready to kick off their PASSPORT Season at PG&E Auditorium on Beale Street in San Francisco to present the theater’s annual holiday piece “BLACK NATIVITY” a gospel celebration of Christmas, December 11-28.

Morrison was in town in 1987, during early years of LHT’s beginnings, founded in 1981. For 25 years the Theater was located downtown Sutter Street, earlier this year FORCED to relinquish the spot – now a theater in TRANSITION looking for a new home, in the mean time will be presenting works at various venues in the Bay Area!

Happy to laugh it up with Morrison, praised her spiritual beauty, AWESOME writings, and opportunity for a photo opt!!! BYPASSED the chance to ask her WHO IS THE REAL FIRST BLACK PRESIDENT NOW??? She made the comment years ago BILL CLINTON WAS THE FIRST BLACK PREZ!!!

MOVING ON – Her new work is STUNNING! BOGGLES my mind how she’s able to go deep within her inner soul, a trance, or perhaps a seance. Brilliant development of story and characters when writing about SLAVERY in the 1680s America setting (when WE were KINGS AND QUEENS). “A Mercy” which examines slavery through the prism of POWER, NOT RACE! She writes slavery was a color-blind, equal-opportunity. State of misery, not yet the rigid, peculiar institution it would become. A Mercy offers an original vision of America in its primeval state, where freedom was a rare commodity.

Among the many guests who greeted and purchased her book, INCLUDED a SURPRISE visit by ANGELA DAVIS, 1970’s BLACK ACTIVIST, looks well and reside in Oakland. Wished there had been time to talk with her…remember those BLACK POWER days. August 7, 1970 changed her life; Members of the San Francisco Redevelopment Agency – FRED BLACKWELL, Executive Director, GAYNELL ARMSTRONG-McCURN, Project Manager, Western Addition A2 ; and FRANCEE COVINGTON, President Redevelopment Board;…

Hey, let me get back to what I like to do best – LISTEN TO SOME GROOVY SOUNDS!!! Last Sunday discovered The BLISS Bar, a spot in San Francisco’s lively NOE VALLEY Neighborhood on 24th Street! Pianist LARRY VUCKOVICH has turned Sundays into a JAZZ happening, kicking off a New Art of the DUO Sunday Afternoon Series.

SASSY Vocalist KIM NALLEY performed … AHHH, the fabulous HOT vocalist, former co-owner of Jazz at PEARL’S, seen in RARE PERFORMANCE – 3 HOURS – singing gospel, blues, jazz, ballads, gyrating at the mike, danced with a few gents on the scene, between Larry’s solos, back to the mike. Kim was AWESOME, FREE from marriage and the chores of running a club, able to concentrate on her singing! .BLOWN AWAY with her GOSPEL flair singing “When The Saints Come Marching In,” slow then a deep powerful burst like MAHALIA JACKSON – the lady went to CHURCH YA’LL … rocked the place; smooth “Sophisticated Lady” looking every bit the part, dressed in simple but elegant black dress, knee high, black dressy heels, showed French polished pedicured toes!

1300 on FILLMORE caught the talented collective JAZZ MAFIA in the Heritage Lounge, musicians of all genres – BAAAD GROUP! Keyboardist with organ sound, got down – reminded me of GROOVE HOLMES and days at Jack’s, the Scene, and University Hideaway; vocalist blew me away with her rendition of “Save Your Love for Me”. Had to give co-owner MONETA WHITE HER PROPS – we slapped HIGH-FIVES on her booking finesse. Shared she found the group in a hole-in-the wall in the Mission District. Hey, CHEF LAWRENCE BE COOKIN’ AND MONETA BE OUT ON DA streets checking out what’s happening! YOU GO GIRL!!!

HEY, IT’S NICE TO BE NICE AND TO ALL OF YOU OUT THERE … LOOK FOR ME … I’LL BE THERE …
E-MAIL Rochelle at iheard@earthlink.net