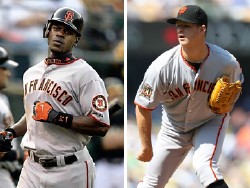 My infatuation with the San Francisco GIANTS ends this weekend! It’s been an exciting season, now my mind can turn to other things – FOOTBALL for one! One more time out at AT&T Park last Saturday afternoon to see the GIANTS/CUBS game, and say good-bye to the fellows; hopefully many of the young players will return! HIGH KICKIN’ BARRY ZITO, the SEXIEST pitcher in baseball, lasted about 4 innings; the relievers couldn’t maintain thus the GIANTS suffered a 6-2 loss!

Rapped with GIANTS Announcers DUANE KUIPER and MIKE KRUKOW – they often refer to AT&T Park as the “YARD!” Complimented KRUK on his debonair fashion attire Friday night when he emceed the Annual “WILLIE MAC AWARD” presented to right handed pitcher MATT CAIN, named after the GIANTS Hall of Famer WILLIE “STRETCH” McCOVEY who was on the field to present the plaque, and photo op. The award is honor bestowed upon most inspirational player of the team, as voted upon by Giants players, coaches and training staff. CONGRATULATION to the fine young pitcher who has a bright future on the mound – AND HE CAN HIT!

Prior to the Saturday game the Giants commemorated PITCHER JONATHAN SANCHEZ’s NO-HITTER game thrown against the San Diego Padres on July 10 at AT&T Park. A pre-game unveiling of a bronze plaque on the Giants Walk of Fame held at 11 a.m. along AT&T Park’s PORT WALK, located behind the right field arcade. MISSED the ceremony by 15 minutes, but caught up with the COOL Sanchez in the Club house., handsome in red – he has that (CARLOS) SANTANA spirit! Left him with “SEE YOU NEXT YEAR!”

FAREWELLS to … outfielder/powerful hitter AARON ROWAND who was positive about next season; versatile player EUGENIO VELEZ – thumbs up for his great season; THE PANDA – PABLO SANDAVOL, jolly as usual, teasing two lady staffers. Shared I HEARD his baby daughter calls him PANDA, he smiled in agreement. DA PANDA was entertaining, but he hustled, versatile role on the team, like the rest of the players fought through the ups and downs trying to win, seemingly impossible, heartbroken over losses, a long tough season. After the last out Sunday in San Diego against the Padres, the team will head back to San Francisco, pack, travel home to their families.

I’m sure Left-fielder FRED LEWIS feels the same! HAPPY to catch him relaxed in front of his locker, headphones on his head, listening to music, fully dressed. Heard one sports writer on a live Comcast sports talk show called him “THE FORGOTTEN MAN!” .

Lewis came to my attention in May 2007, when the ROOKIE was called up from the GIANTS Minor League, STUNNED with others who watched the game when he hit his FIRST big league home run as part of a GRAND CYCLE! His 3rd major league game – MAY 13 (Mothers Day) in Colorado against the Colorado Rockies. Lewis became known as “THE SLAMMIN’ ROOKIE”! The last Giants rookie to hit for cycle was Dave Kingman on April 16, 1972 at Houston.

This writer has been tracking his performance, for the man showed potential to be a FANTASTIC player. GIANTS’ 2nd round selection in 2002 First-Year Player DRAFT, signed through 2009. Lewis graduated from high school in WIGGINS, Mississippi, born in Hattiesburg. Excelled on farm team, minor league and GIANTS – SPRING TRAINING read how well he was doing; THE SAY HEY KID – WILLIE MAYS worked with him, seemed impressed – perhaps another Barry ‘Bonds in the making!

Lewis was the POINT MAN for the GIANTS 2009 season to take over the spot Barry Bonds held, although not expected to be a superstar, but Manager BRUCE BOCHY and staff had their mindset on him! Season started off well, BUT NOTICED a week or so BEFORE the All-star game, his hitting suffered, missed balls, other players took over left field. He became a PINCH HITTER, some days not playing at all, whereas he was once in the line up every day! WHAT HAPPENED??? My VIBES told me something was bothering him. I even went so far as to call Mays at his home to request, if possible, to check and see if Lewis was OK.

Lewis and I talked about 10 minutes, in what was an interesting conversation – somewhat revealing! I asked “WHAT HAPPENED???” Shared my observation about his game, and mannerism in the dugout; now a pinch-hitter; he too seemed perplexed in how this season went for him, stating he didn’t know – THINGS CHANGED! WHY???

I GET IT!!! LEWIS is a LONELY MAN in the DUGOUT!!! LOCKED into a DIFFERENT CULTURE! This season, other than RANDY WINN, the other AFRICAN AMERICAN on the team, SPANISH speaking players from the DOMINICAN REPUBLIC, whose English isn’t that fluent; and a few Caucasian make up the roster. Seemingly, LEWIS DOESN’T FIT in their cycle! GONE are BLACK players like Emmanuel Burriss, Ray Durham whom he could talk to … discuss his problems reference what he’s doing wrong, or just kid around. HE NEEDED A VETERAN player to talk to!

There’s been a lot of pressure on MANAGER BRUCE BOCHY and staff working with a young team, trying to win; especially during the WILD CARD play which offered some hope, now diminished. The season ends Sunday. Bochy’s signed through 2009. WILL HE BE BACK???

Lewis has NO MORE OPTIONS, unless renewed, his contract is up this season! WILL THE GIANTS RETAIN HIM or even at that, DOES LEWIS WANT TO STAY??

Left Lewis talking to his mom via phone, as is his usual habit before game time. Noticed BOCHY was alone in his office – “GOT A MINUTE?” He did, asked about Lewis’ situation – WHAT HAPPENED??? Shared he would start Lewis in Sunday’s game. HE DID BUT around the 5th inning or so as Lewis (hit a single in 2nd) was coming up to the plate Bochy took him out, replaced with outfielder ART TORRES who STRUCK OUT!

During the game, LARRY BAIR, Giants Executive Vice President and Chief Operating OFFICER, visited the PRESS ROOM with his two kids. GAVE HIM A FIST PUMP – “SEE YOU NEXT YEAR!.”