“I Heard That”: Gung Hay Fat Choy – The Year of Two Tigers; Tiger Woods Still in the Rough! … 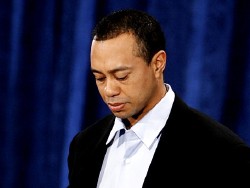 We knew TIGER WOODS was a TIGER ON THE GOLF COURSE, but who would have expected a tiger on the loose OFF THE GREENS! SHOCKED over widely publicized reports of a sex scandal when the world’s top golfer caught, hands in the cookie jar, to use golf terminology – in THE ROUGH! STUNNED when it was revealed through the media Tiger was having multiple affairs, brought on by the Thanksgiving Day drama at his Florida home where in the wee hours of the morning wrecked his car, wife Elin saved him, back in the home, mum to the public, vanished out of sight, left the world wondering of his whereabouts! SPEAK TO US!!!

TIGER DID IT HIS WAY! Still in control, last Friday called a press conference (TV media called it a ‘SPECIAL REPORT’) to make a statement to a small group of reporters and friends at the PGA Tour headquarters in Porte Verde Beach, Florida. No questions from the media.

A REMARKABLE 13 minutes listening to Tiger, who looked scared, the usual wide smile stiff, humble, apologized for his indiscretions of infidelity to his wife Elin, and the shame it had brought upon his family. Stated “I’m deeply sorry for my actions” embarrassed by what he put his family and friends through, and have a lot to atone for. Admitted he has been in therapy for 45 days; insists wife Elin never attacked him during the Thanksgiving incident. Insisted the media leave his family alone! No indication when he would return to the links, his focus would be dealing with personal marital problems that threatened to destroy his marriage! Sad to see Tiger in the emotional state he’s found himself in.

Tears welled in my eyes at the end of his statement, when he stepped from the podium to walk to where his mother was seated, they embraced for several seconds. Ah, what would sons do without the loving support of their mothers. Tiger’s greatest inspiration and mentor was his dad, the late EARL WOODS who passed May 3, 2006. He taught his son the game of golf before the age of two. Believe Tiger still suffers from the loss. My thought, he needs his dad today to see him through this tragic ordeal.

The Spectator game in golf has suffered since Tiger has been off the circuit, now fans like myself not knowing when he will return for he shared he was leaving the following day to resume treatments at the clinic in Hattiesburg, Mississippi. Sad to see his back as he exited behind dark curtains, hand to his face, tears assuredly fell. A broken 34-year old man for the moment, faced with the biggest challenge in his life! He will embrace his faith of BUDDHISM, which he said he’d drifted away from in later years, will give him strength. The question – WILL TIGER WOODS EVER RETURN TO PROFESSIONAL GOLF???

Brenda’s spirits were high, smiled all evening when members stopped at the table to embrace or touch her hand in love! BOB GRAHAM, R&B Club FOUNDER, DJ extraordinaire, played nonstop hip dance sounds; at times slowed the tempo, once to request Brenda and Phil to take the dance floor when he played her favorite song by Bloodstones, married over 50 years, this wonderful couple touched your heart as they embraced in the spotlight, then joined by others!

GAIL GRAHAM, Bob’s lovely wife and business partner, greet guests at the door (everyone glad to see her back after health issues, a survivor, doing well ). Among those seen having a good time: community activist for young Black men and the youth – THOMAS MAYFIELD; one of MUNI’S finest AARON DUNN, club’s appointed dance host for ladies without partners.

The R&B Club always packed with members and friends who come from all over the Bay Area, hold forth every Sunday within the private VERDI Club on Mariposa at Potrero Streets. Sunday there were several birthday celebrations at individual tables, which one can reserve in advance. This Sunday party MARDI GRAS STYLE ! Call Graham for info (415) 330-9994.

LAISSEZ LES BONS TEMPS ROULER! FAT TUESDAY ON DA ‘MO WAS HOT at 1300 Restaurant starting 6 p.m. Saxophonist BOBBIE “SPIDER” WEB and his All-Star musicians performed in The Heritage Lounge, famous for legendary personalities of the old Fillmore grace the walls, and a conversation piece. Webb, a RENAISSANCE MAN, grew up in the Fillmore, kept the music hot ’til 9 p.m.

The intimate room packed when I arrived. SHOUT out to Lady BENITA FINLEY PURIFOY for the upfront seat, sipped exotic HURRICANE cocktails, partied with her and women of LIBERATION Church; also enjoying the vibes were: Supervisor ROSS MIRKARIMI – lower Fillmore part of his 5th District; Commissioner LONDON BREED, SF Redevelopment Board Commission; Dr. BRENDA WADE; man about town JULIUS BANKS (my condolence to him in the loss of his beloved aunt Ms. Myrtle Williams of the City who passed Feb. 7. She was 81.)..

The evening celebrated 1300’s illustrious CHEF DAVID’S BIRTHDAY … planted a kiss on his cheek. The tall ‘n’ handsome chef de cuisine was happy, toasted by many, holding gifts as he rushed back to the kitchen. Told his wife MONETTA WHITE the Bodega Bay FRIED OYSTERS (special batter) were SCREAMIN’!