“I Heard That”: Bravo to 3 Dynamic Women – Harris/Quan/Cohen! 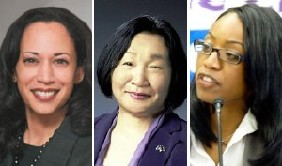 KUDOS to OAKLAND MAYOR-ELECT JEAN QUAN and MALIA COHEN, San Francisco District 10 Supervisor-Elect! GOOD NEWS for many of us who waited with anticipation the outcome of Dist. 10 Supervisory race. Happy to learn Cohen won, thus the District will STILL retain Black representation on the San Francisco Board of Supervisors! Ms. Cohen succeeds Supervisor Sophie Maxwell, whose term is up at the end of the year.

Many of you may not understand why District 10 was important for Black politics in this City; let me be point blank – the area is the LAST bastion for Blacks to win a voice at the table of decision-making in this town; represent OUR issues!

Now, time to move on! Suggested, in a conversation to seasoned community activist ESPANOLA JACKSON, a resident of the district, to embrace Ms. Cohen in support and guidance, if needed, watch her back! The pretty young woman will take office January 8, 2011. A lot will be on her plate in representing her district, BUT Citywide business as well.

Always encouraged to see YOUNG LEADERS step up to the plate, take the torch passed on to them! As a member of the African American Democratic Club (AADC), had the pleasure on several occasions, during political forum meetings with candidates, to meet Ms. Cohen, found her to be impressive, sharp and has an interesting PR background, for one – Social Media Consultant, which I’m sure the experience useful in her successful campaign. She focused on jobs, health care and public safety.

Cohen is a San Francisco native, has worked for Mayor Gavin Newsom, and as a policy analyst for the federal government. This young woman has a bright future. Active in the Democratic Party; received major endorsements in her first run for political office (the youngest to run in Dist. 10). I HEARD THAT wish her well in meeting the challenges before her, not only in her district, but Citywide!

Oakland City Councilwoman, MAYOR-ELECT JEAN QUAN. FIRST FEMALE and Asian American woman to become Mayor of Oakland, ran a successful grassroots campaign. A woman who has served on the Oakland City Council for eight years, BELIEVE me, I was shocked when she won over former state Senate President Pro Tem DON PERATA who, while in the STATE HOUSE, served his constituents well.

After one term, MAYOR RON DELLUMS will leave office at the end of the year. TIME for fresh NEW active blood in City Hall! Quan’s credentials are numerous; she will make an excellent mayor for the City as she has represented District 4, that include Montclair, working class neighborhoods of Allendale, Brookdale, Dimond, Maxwell Park. Wonderful story, Daughter of poor immigrants, family has lived in Oakland for over 100 years, her mother was illiterate and her dad died when she was very young. She attended U.C. Berkeley on a scholarship. As a college student founder of the Asian American Studies.

I HEARD THAT PROUD of HARRIS/QUAN/COHEN! We don’t need the likes of MEG WHITMAN, candidate for Governor, who could have used her millions to help the needy; but lavishly spent 140 million, and more the day of the election, trying to BUY THE GOVERNOR SEAT!!! THANK GOODNESS CALIFORNIANS WERE SAVED!!!

SIDEBAR – SHAME! SHAME! The San Francisco 49ERS played a MISERABLE game Sunday at Candlestick Park – SHUTOUT at the hands of the Tampa Bay Buccaneers 21-0!!! The last time the NINERS were shutout was October 1977! Embarrassed after writing so glowingly about the Niners in last week’s column!!!

IN CLOSING, wish many of you a warm and Happy Thanksgiving Day with family, friends, loved ones, BUT be thankful for every day! At these difficult times – jobs lost, home foreclosures for some, the RICH GETS RICHER, while the Middle class and Poor are suffering. People like MEG WHITMAN, selfishly squandered moneys that could have been spent to help CA SCHOOLS; the sick, the HOMELESS; the unemployed whose unemployment checks ran out, Politicians in Washington want to CONTINUE tax breaks for the RICH!!! The HAVES will enjoy a warm and happy Thanksgiving – what about the HAVE-NOTS??? MS. WHITMAN, CAN YOU SPARE A DIME???