“I Heard That” — Black-on-Black Violence 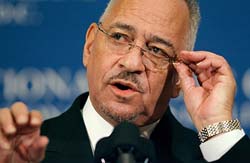 KEEP HOPE ALIVE! Proud, inspired the day of January 17, 2008 in line at the San Francisco Westin Hotel on Union Square, to greet and embrace Democratic Presidential candidate Senator Barack Obama, to tell him how proud I was of him – like a mother for a son! Inspired for months, but within the last two, like many, frustrated with the Democratic campaign; mainly because of contender Senator Hillary Clinton’s negative, desperate efforts to discredit and kick contender Senator Obama to the curb!

Obama has been pulled off his road map, and can’t seem to get back on track with his message, caught in the vicious cycle of those who will use any method to pull him down through racist tactics! Chocking him around the issues of his former Chicago pastor, the distinguished Rev. Jeremiah Wright, and his remarks that have many White folks in particular in an uproar! However offensive, Wright, by life experience has been righteously angry for a long time, but his actions is being used to spotlight Obama!

The controversy started weeks ago through a Video of Wright brimstone preaching, constantly aired by the media in sound bytes, not fully understood in complete text, the sermon of a Black man’s experience in White America preaching Black liberation – social and religious – heard in Black churches. White folks need to visit a Black Church on any given Sunday morning (the most racist hours ) to understand the culture of Black sermons. It is not all honey in the Black community!

Come Monday morning!!! We witnessed Black on Black Crime! The undoing of Obama through his spiritual leader, who has done more damage to Obama’s candidacy than The Clintons and other surrogates, when he spoke at The National Press Club in Washington D.C. and a national stage to deliver his sermon, seen on stage well-dressed men of the Muslim security guards!

To quote John Bee of Chicago, who sent me an E-mail – Black on Black Crime, “I have one simple question; regardless the rationale, when will we STOP destroying one another???”

The righteous speaking Rev. Wright, former Pastor Trinity Universal Church, dissed by Senator Obama for political reasons, over Wright’s remarks in a video that has angered some White folks especially. Obama publicly distanced himself, so it seems Wright is fighting back to teach Obama a lesson about loyalty.

One thing stood out – he’s killed Obama’s chances for the nomination!
The only African American to have a shot at the Presidency! Can Obama ignore the elephant in the room??? Or will he have the guts to take his old friend down, if he wants to save his neck and candidacy??? What a predicament the young Senator find himself in.

At deadline Tuesday morning, caught part of Obama’s press conference in remarks that denounced Rev. Wright’s performance, stated he was saddened and angered and found them not only divisive but destructive.

JAZZ is an endangered species! Many of the great artist of the music have passed on, some too ill to perform, or venues that played the music are scarce. Great news to hear Jazz at Pearl’s will NOT close as had been announced earlier this month. Heard Saturday night an investor has come forward to keep the doors open!!! Randall Kline, lover of Jazz, Founder and CEO SFJAZZ, keep the torch burning!!! I’ve been covering the Festival since its inception – 25 years ago!

It’s truly a blessing Legendary Jazz vocalist Ernestine Anderson is STILL doing it! To say she’ll celebrate her 80th birthday later this year is remarkable! Last Saturday night the DIVA was showcased in the SFJAZZ Masters Series at the Yerba Buena Center Forum. There, front row center, a rare treat to hear Ernestine perform in the City; last time Jazz at Pearl’s. She was in great husky vocal tone – girlfriend’s pipes still got it! One of her hits “Never Make Your Move Too Soon” which she performed, became my philosophy in life.

Lafayette Harris, marvelous on piano, flew in from New York, led the trio on stage. Ernestine’s repertoire for the evening included the beautiful ballad “Skylark,” swung out with “This Can’t Be Love,” swinging on “Love Being Here with You “! Ah, she’s survived through the years since she performed on the first ever Monterey Jazz Festival, over 50 years ago; the following year being name “Best New Vocal Star” in DownBeat Magazine’s Critics Poll.

Met Ernestine years ago; stayed in contact via phone to her Seattle home; especially on birthdays. Chance to chat with her backstage in between the two 45-minute sets. Shared she would be traveling to Japan within the next two weeks to do a gig.

PARIS MUSING – After World War II, racism in America caused many gifted artists, musicians, writers and others to move to Paris – called expatriates. On the itinerary during my stay in Paris, under the guide of two “Black Paris Divas” Mademoiselle Marie Johnson and Robin Bates, Cafedelasoul, enjoyed the historical walking tour within easy reach from our hotel in the Latin Quarters (on the right Bank,) to the Montparnasse area where writers Richard Wright, James Baldwin, Chester Holmes, Langston Hughes, among others lived and hung out.

Today there are an interesting group of Blacks who live in the City of Lights. “The Grande Dame of Black Paris” Madame Patricia Laplante-Collins, originally from Atlanta, Georgia, moved to Paris 25 years ago, married and divorced a Frenchman, and in 1994 found her niche when she started hosting African American literally Sunday night Paris Soirees – a chance to meet people from the Paris International community; dinner followed by an presentation by an interesting personality. Laplante-Collins spent the weekend with us by train to journey to the beautiful French countryside side town of Sarlat by train .Found her to be an interesting lady. The May issue of Essence Magazine feature a brief article “To Paris, with Love” noting “Eight decades after the Harlem Renaissance, the City of Light still has our heart” There’s mention of “The Black Paris Divas”. started by Kat St. Thomas, author “Kat Tracking through Paris” a guide to Black Paris; Robin Bates and Robin Mitchell (Kat and Mitchell did not join us on this trip).