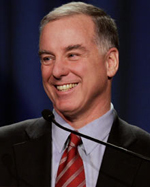 After presiding over the Democratic Party’s most successful national grassroots mobilizing campaign since the New Deal, Howard Dean is returning to Democracy for America, the organization he founded nearly five years ago. Dean’s return to DFA got scant attention in the traditional media, which has underestimated the former Vermont Governor from his 2004 presidential campaign through his leadership of the Democratic National Committee through the 2008 elections. Dean and DFA could play two critical roles in the months ahead. First, Dean is a proven fundraiser who can raise the money necessary to hire a fleet of organizers to work in swing districts and states for universal health care and other progressive measures. Second, unlike the newly formed Organizing for America, Dean and DFA will not be restricted in targeting the wavering Democrats whose votes are essential to pass such measures as universal health care, the Employee Free Choice Act, and comprehensive immigration reform. In addition, under Howard Dean’s leadership, DFA could help spark the “movement mentality” that was key to Barack Obama’s campaign, but which has yet to emerge during his presidency.

Once Howard Dean announced he was leaving the DNC, many wondered if he could find a place where his talents would be put to best use for the enactment of universal health care and other causes for which he has long fought. Dean ultimately decided to return to the organization he created nearly five years ago, and which has prospered under the leadership of his brother, Jim, and a solid core of activists from across the nation.

Dean’s return to DFA could not have come at a better time. Not because the organization was flailing in his absence, but rather because he brings a fundraising prowess and star quality that will enable the group to rise to a greater level of effectiveness.

Following the November election, I was among many who hoped that the Obama campaign would make a serious effort to enlist many of its young, idealistic election organizers in a new entity that would enable these newly skilled activists to continue working fulltime for social justice. I felt the United Farmworkers of America of the 1960’s and 70’s provided a model for such an “incubator” organization, and hoped that Obama’s staff recognized the historic opportunity to create a new training ground for future generations of social change organizers.

Unfortunately, Obama’s team has gone in a different direction. It created Organizing for America (OFA), which is controlled by the Democratic Party and which will not directly pressure Democrats. OFA will likely have less than fifty fulltime organizers, and its potential impact is unclear.

I saw the involvement of Obama’s team as critical to the new entity because of its ability to raise the necessary funds to enlist a projected 250 new organizers for change. Howard Dean is one of the few leaders outside of Barack Obama capable of raising such funds, and he has the perfect vehicle in DFA.

The stimulus battle showed that winning progressive measures requires targeted pressure campaigns against swing lawmakers. I argued for an approach akin to that used by the Central American Peace group “Neighbor to Neighbor” in the 1980’s, whereby organizers go into key districts and states, build constituency support for the cause, and then have these constituency groups – not “outside” organizers – put the politicians’ feet to the fire.

DFA is perfectly situated to perform this task.

It already has a network of activist groups across the nation who are willing to challenge politicians who defy their constituencies desire for universal health care and other progressive measures. What DFA has lacked to move to the next level is an influx of fulltime paid organizers, and this is what Howard Dean has the ability to create.

SEIU is already committed to placing over 450 organizers in key swing states, and, like MoveOn.org, ACORN and other national advocacy groups, is willing to pressure Democrats. But a “movement mentality” is lacking around the health care debate, and there are few people with a better track record of generating passion and a building wave of excitement around health issues than Howard Dean.

Reigniting a Sense of “Movement”

In talking to activists across the country in recent weeks, it appears that many are starting to feel a bit disconnected from the Obama agenda. Now that the election is over, people are not clear on how they can plug in to work for change, and want to do more than send money or e-mails.

For all of the great work that labor and community groups are doing, it is clear that more must be done to spark grassroots involvement. This requires fulltime organizers who deal with people on a personal level, and not exclusively or even primarily through email, Twitter or similar effective but impersonal approaches.

Activists in key states and districts should already be building local support for universal health care. That this is not yet happening in as many places as is needed is testament to the gap that Howard Dean and DFA can potentially fill, and hopefully will.

Progressives must revive the powerful and widespread sense of hope and excitement felt on election night, and on Inauguration Day. And other than President Obama, there is nobody more capable of doing this than Howard Dean – who has returned to the trenches just when he is needed most.