How to Support Walmart Workers This Holiday Season 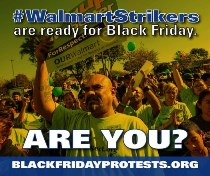 This Thanksgiving, Walmart decided to show its workers that it’s concerned for their families. First, the retailer required that employees work not only on Black Friday, but also Thanksgiving night this year as, once more, it plans to start its Black Friday sale Thursday evening. Second, Walmart knew that because its workers make such low wages and are often on food stamps, the company decided to collect canned food for them.

Yes, the food box scandal that you’ve read in the news over the past few days is true. Walmart workers have been scraping together food donations for – themselves! Even The Colbert Report covered the disgrace. All of this comes on the heels of Walmart workers having to strike due to retaliation for speaking out against low pay ($8.81 an hour!), insufficient hours and unaffordable health care.

So, what can we do as consumers, progressives and conscious bystanders to help support these workers?

1. Don’t shop at Walmart, especially not on Thanksgiving Day!

2. Join an action at your local store—go to http://blackfridayprotests.org/ to find an action happening near you. Just plug in your ZIP code and see what’s happening on Black Friday. Can’t make it? Then sponsor a worker, make a donation and sign the petition to President Obama!

Wish a Happy Thanksgiving to your local Walmart workers by standing in solidarity with them for their rights to a better workplace and better wages!

This piece first appeared in fryingpannews.org