How the Other Urban America Lives 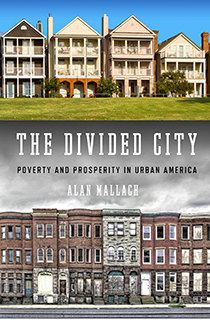 The Divided City: Poverty and Prosperity in Urban America by Alan Mallach

In his preface to The Divided City, Adam Mallach says he would not be addressing “New York and San Francisco, or the half-dozen or so hot coastal cities that get the headlines and dominate the blogosphere.” Instead, he would be writing about the “legacy cities” like Buffalo or Cleveland or “smaller cities and factory towns like Trenton, Youngstown, and Aliquippa, Pennsylvania.” He describes these areas as involving “real places and real people.”

My own new book, Generation Priced Out: Who Gets to Live in the New Urban America, discusses very real people facing high housing costs and displacement in places just as “real” as those covered in Mallach’s “legacy” cities (I am going to use the term “legacy cities” throughout because the author does). But I get his point. The perception that urban America is booming and that its biggest problem is gentrification rather than poverty ignores the realities of the Buffalo’s and Cleveland’s.

I am a longtime fan of Mallach, a senior fellow at the Center for Community Progress. He started his housing and community development career in Trenton, New Jersey in the 1960’s; cities do not get more real than that.

Mallach is right that there are far more articles about gentrifying neighborhoods in Pittsburgh and Detroit than about the ongoing economic decline in the communities we do not read about. He quotes a friend saying the “biggest problem nobody is talking about” is how the revival in these legacy cities has only touched a few neighborhoods. Most of these cities are getting poorer and more segregated.

Mallach’s book is titled “The Divided City,” not “The Divided Urban America.” He wants to show that for all of the stories about Young Grad’s eating in hipster restaurants in Baltimore’s Harbor East, Cleveland’s University Circle, downtown Detroit, or Pittsburgh’s Strip District, that the majority of neighborhoods in each of these cities are in decline. And this decline requires government action that has not occurred because the federal government has largely left economic revitalization of low-income neighborhoods to the private sector, which has ignored these non-gentrified areas.

Mallach makes a critical point about revitalizing urban neighborhoods: the fixation on gentrification has ignored the fact that many if not most neighborhoods in legacy cities need revitalization. Far more city blocks suffer from abandoned homes, high poverty and unemployment and overall decline than from gentrification, yet fears that neighborhood renewal could cause displacement leaves the communities without needed assistance.

His talk about the gap between the “rhetoric of gentrification and the reality of it on the ground” reminded me of reporters who have asked for my take on Twitter’s alleged “gentrification of the Tenderloin” and Mid-Market. A walk down Mid-Market would expose its street problems are as bad as pre-Twitter, and national media coverage of Tenderloin drug dealing sent a similar message of non-gentrification. Yet the fear of gentrification allows the media and some activist to ignore the daily struggles of working and formerly homeless people to navigate unsafe sidewalks.

The Two Sides of Economic Development

What all of the declining neighborhoods discussed by Mallach have in common is a lack of jobs. As Mallach puts it, citing the Ford adage, Jobs are Job One. Yet the challenge in the post-de industrialization era has been creating well-paying jobs that go not simply to the group Mallach describes as the “Young Grads” but to those without a college diploma.

The reason legacy cities have not reversed their fifty plus year decline is that neither government nor the private sector has created anywhere near enough of these jobs. Government’s role in job creation via urban redevelopment often proved catastrophic for low-income, racially diverse neighborhoods. And private sector investment is seen as a strategy for displacement and gentrification.

I thought of Mallach’s concern for legacy cities when Amazon announced it would place its two new headquarters in northern Virginia and Long Island City in Queens, New York. Neither address the jobs crisis in legacy cities, yet if Amazon had selected a neighborhood like the South Side of Chicago it would be widely vilified for engineering an upscale transformation of that historically African American district (Amazon’s decision this week to open a second headquarters across from the nation’s largest housing project in Queens quickly raised deep concerns among area residents).

What is required to effect the development without displacement that Mallach urges is the type of targeted government assistance that the United States saw during the New Deal and during the start of the War on Poverty. I share Mallach’s optimism that such is possible, though it would require a dramatic shift from the restrained approach to government job creation that even the Clinton and Obama administrations adopted.

But thanks to Mallach’s book, the reality of legacy cities will no longer be hidden by stories of the new hipster restaurant in Pittsburgh or Detroit’s “comeback.” Acknowledging this harsh reality is an essential step toward remedying it.

Randy Shaw is Editor of Beyond Chron and the author of the newly released Generation Priced Out: Who Gets to Live in the New Urban America.