How Obama Can Revive Hopes for Change 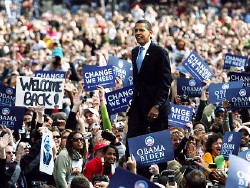 In 2008, young people and longtime non-voters set cynicism aside to mount a national grassroots campaign to elect a President vowing to enact Change We Can Believe In. But in 2011, these hopes have been dashed, a victim of a political system that promotes minority rule and of a President who prefers to work within the political mainstream and favors compromise to conflict. Millions who once believed that a Democratic President and Democratic-controlled House and Senate would set the nation on a new course now fear that a Republican President will make a troubling status quo even worse. Can hope for national progressive change be kept alive? In hindsight, activists should have taken it upon themselves to become the vessels of hope rather than trusting Barack Obama. But at this political moment, it is Obama who is best positioned to restore the hopes of his core supporters. Here are five quick actions he can take to raise the spirits of his base before the 2012 elections.

In the past three years, the once bright hopes for the nation’s future have dimmed. The question now is whether President Obama will seek to restore faith in the prospects for progressive change, or else assume that he can prevail in 2012 by defending an untenable status quo against fears that a Republican will make matters even worse.

Obama may have no choice but to focus on restoring hope. Democrats cannot win elections based on fear, and Obama’s campaign team recognizes that it must revive grassroots enthusiasm for the President to win re-election

It’s no surprise that the lead story in the June 6 New York Times concerned Obama’s interest in a steeper than expected troop withdrawal from Afghanistan. The President cannot hit the campaign trail facing questions as to why he is spending billions on a nonsensical war without end when schools in the United States are being decimated by budget cuts.

Even diehard Obama defenders have a hard time justifying ongoing Afghanistan operations. The war’s expansion has increased grassroots cynicism, and a major withdrawal would at least show that the President is finally listening to his base.

Obama’s well-documented hypocrisy toward immigration reform – he claims to be pro-legalization while his administration deports record numbers and does nothing to ease immigrants’ plight administratively – must end. Obama can take a major step to revive hope for the future among young people by imposing a moratorium on deportations of those who would be covered by the Dream Act. He can also boost enthusiasm among labor and Latinos by killing E-Verify and making other administrative changes.

Latino turnout saved Harry Reid last November and will prove pivotal in several states in 2012. By finally moving on overdue reforms, Obama can restore confidence among Latinos that he will act rather than merely talk on their behalf.

Among the millions of young people whose hopes have turned to despair since 2011 are a large segment whose primary concern is the environment. The environment has been off the political radar screen in recent years, a victim of Republican intransigence and tough economic times (Jonathan Franzen makes a strong case for the latter crowding out environmental concerns in his new novel, Freedom).

Obama needs to show that his 2008 campaign promises for green jobs were not illusory, and that he can work his various departments to expedite projects and hiring. And if he can’t get green job creation moving faster, at least he can show young people that he is trying his best and that they should not abandon faith in a greener future.

Obama’s Justice Department indicted John Edwards last week, and appears on track to spend as many resources on that ill-conceived case as it has on the Barry Bonds perjury prosecution (it is also investigating Lance Armstrong’s steroid use). Meanwhile, Wall Street executives get off scot-free despite nearly destroying the nation’s economy.

Obama must reverse this bizarre prioritization of tabloid prosecutions, which has depleted hope among those who believed his campaign promises to go after those responsible for the fiscal meltdown.

President Obama chooses who works in his administration, and he has selected remarkably few with progressive roots. His frequent recycling of former Clinton appointees undermines his campaign agenda for change, and shows that his administration operates as business as usual.

Obama still has time to make myriad appointments to change this perception, and this is another area in which his inaction cannot be blamed on Republicans (and for positions subject to veto by Republican filibuster, it still helps that a community-based person was chosen).

Will Obama take any of the above actions, or make similar moves to revive hope in the future among his base? I think he will, though his commitment to change could well end on Election Night 2012.

At that point it will be up to activists to use the new political landscape to do what they should have done starting in January 2009: which is to create their own sense of hope for the future that is not dependent on a politician’s campaign promises or moving speeches.