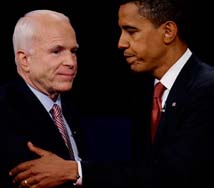 During the many Democratic primary debates, Hillary Clinton would invariably cite an anecdote about a hard-working person she met on the campaign trail that was now in trouble. The problem could be a lack of health insurance, foreclosure, or the loss of a job, but in each case it gave Clinton the opportunity to connect with working and middle-class voters. In contrast, Barack Obama spoke in terms of policies, not personal stories. He had a better track record on economic issues impacting working people (Clinton strongly backed NAFTA), but her rhetorical strategy was far more effective. In the first presidential debate, Barack Obama followed Hillary Clinton’s script perfectly. He continually talked about the problems of the working class, and echoed Clinton in mostly emphasizing the health care crisis. When CNN polled undecided debate watchers, Obama was deemed the winner by 51-38%—and this victory was primarily attributable to his 62-32% margin among voters who thought Obama was “more in touch with the needs and problems of people like me.”

The Punditry Gets it Wrong

My main reaction after watching the debate was that John McCain had made a major error by failing to offer any specific programs to help the working and middle-class. On the other hand, Barack Obama had gone out of his way to inject the problems of working people into his answers, laying out a domestic policy agenda involving universal health care, increased funding for early childhood education and for all schooling through college, alternative energy, and the rebuilding of the nation’s infrastructure.

So I expected the pundits to seize on McCain’s omission once the debate ended. But I was very wrong.

Instead of criticizing McCain for offering nothing to help most voters, pundits almost universally praised the Republican for shifting the economic discussion to his plans to cut spending. They felt McCain had scored well in effectively telling voters that he would not fund new programs to help them, and that he would cut existing programs.

Nearly all of the pundits failed to note that McCain had never even used the phrase “middle-class.” And that at a time when voters were looking to the next President for help, McCain seemed disconnected from their concerns.

No pundit that I saw credited Barack Obama with redirecting even foreign policy questions so that he could discuss the problems of working people. And the reason, of course, is that the punditry is as disconnected from working and middle-class voters as is John McCain—so they were far more impressed with his plans to cut spending than those whose votes will decide the election.

That’s why a narrow majority of pundits thought McCain won, and a strong majority thought he excelled most on economic issues.

Obama could have fallen into the same trap of playing to the punditry, and of talking in policy-speak instead of toward people’s needs. And one major reason I think he did not make this mistake is that he saw how effectively Hillary Clinton connected to voters in the primary debates, and he saw the opportunity on Friday night to follow her example.

As annoying as I found Hillary Clinton’s debate performances, one could not deny that she was effective. In debate after debate, she would stare into the camera and convince working people that she had always looked out for their interests, and was the candidate who best understood their pain.

This tactic proved particularly effective in the Ohio debate. As much as Obama tried to pin Clinton with her zealous support for NAFTA and its job-killing impact in the state, Hillary appeared to viewers to better understand real people’s problems.

Last Friday night, Obama played Hillary’s role perfectly. He spoke directly into the camera, and made people feel that he understood their concerns in a way he never did so successfully when debating Clinton.

It was far and away Barack Obama’s strongest debate performance.

And it killed whatever faint hope McCain had to revive his campaign.

Also worth noting is how the blogosphere widely criticized Obama for continually saying that McCain “was right.” Whether this perspective was picked up from the many pundits making this point, or came to people on their own, Obama supporters felt their candidate was far too respectful to his rude opponent.

Well, as has been so often true in Obama’s long campaign, he understood what voters wanted better than some of his backers. It helped that he was seen as respectful, while McCain’s condescension hurt him big-time.

Barack Obama has violated so much conventional wisdom since announcing he was running for president that an entirely new book of campaign strategy might be needed. But what he has disproved most of all is the adage that “Nice Guys Finish Last”—Obama has consistently proven himself a true gentleman, even when, as at the first debate, his opponent acts in a rude and demeaning fashion.