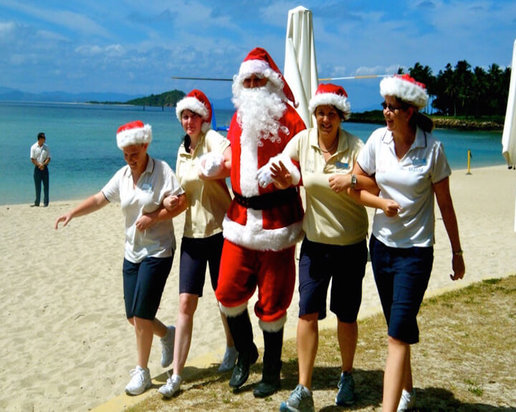 Do the good citizens of New Orleans skip town during Mardi Gras? Do proper New Englanders take tropical cruises when their trees display their most glorious fall colors? Would New Yorkers dare sneak out of Times Square 10 minutes before the ball drops on New Year’s Eve?

Of course not. So why must I leave California this coming Christmas week? Because too many Scrooges—including my wife, who is insisting our family spend this year’s holiday in her native Wisconsin—fail to recognize an essential truth: California is the true home of Christmas.

Yes, I know that California’s status as the headquarters of Christmas is not widely known, especially given the widespread cultural misperception that the holiday should be cold and snow-white. But, like virtually everything else about our 21st century Christmas, that misperception is itself a California product.

Bethlehem, Shmethlehem. It is the Golden State that popularized the modern Christmas via our entertainment industries, that designs it through our toymakers, digitizes it through Silicon Valley, distributes it through our ports, and provides unparalleled settings to celebrate it, with mountain skiing and Pacific surfing both doable in a single Christmas Day.

For documentary evidence of California’s centrality to Christmas, consider the first—if forgotten—verse of that quintessential song of the Yuletide, “White Christmas,” which is actually set in Los Angeles on Christmas Eve.

The sun is shining. The grass is green.
The orange and palm trees sway.
There has never been such a day.
In Beverly Hills, L.A.
But it’s December the 24th. And I’m longing to be up north.

Then comes the familiar chorus—with the very California message that Christmas is a time for nostalgic reminiscences of Christmases Past in colder places. Sadly, some foolish California residents overlook the key “I’m dreaming” phrase and travel to cold, bleak places to recreate such white Christmases. The dream, for those often stranded around the holidays in airports throughout the Midwest and Northeast, often turns out to be a nightmare.

What’s more, the song’s writer, Irving Berlin, author of hundreds of hits (including “God Bless America”), bragged that “White Christmas” was both “the best song I ever wrote” and the “the best song anybody ever wrote.” He told a historian that he composed it at the Beverly Hills Hotel. (Since success has a thousand fathers, other non-Californian sources suggest he wrote it in Arizona or New York.) The version sung by Bing Crosby, that iconic Californian figure, is probably the best-selling record of all time.

The 1942 recording—and the films and TV that have used it and similar tunes—actually redefined the holiday. Berlin, a Russian-Jewish immigrant born Israel Baline, has been credited with taking the “Christ” out of Christmas, turning a religious holiday into a unifying national one. Crosby’s “I’ll Be Home for Christmas,” released the following year as the country endured its third holiday engaged in a global war, solidified Christmas’ status as a national, secular celebration. Today, 90 percent of Americans—including 80 percent of non-Christians—celebrate Christmas.

Subsequent generations of California creators have updated this tradition. For my money, the best California Christmas film is the original Die Hard—an action film set in a Century City skyscraper that ends with snow in Los Angeles—and the best Christmas music came via former Alhambra resident Phil Spector (now in prison after his murder conviction by an L.A. jury) and the Carpenters, the city of Downey’s gift to the world.

And this year, California’s Christmas present to the planet is the long-awaited resurrection of the Star Wars movie franchise, courtesy of those California giants of American storytelling: Disney and Lucasfilm.

California’s Christmas leadership goes beyond the screen. It’s impossible to imagine Christmas without Mattel, the toymaker, incorporated in California in 1948 and based in El Segundo. Its brands include Barbie, Hot Wheels, American Girl, and Fisher-Price. While Mattel faces financial challenges, other toymakers—from the giant Hasbro to smaller firms like Jakks Pacific—have built stronger presences here in recent years, making Southern California Santa’s workshop, or the unofficial capital of toys.

Now, while we all know Santa Claus delivers toys and other gifts to good girls and boys, we should be honest with our kids and let them know that Kris Kringle, who was early to embrace globalization, relies on overseas manufacturers, often in Asia. Many gifts enter the U.S. through our giant ports in Los Angeles and Long Beach, and are distributed via inland California warehouses. It’s only from there that they go to local staging areas where Santa, by some mysterious process, gets them into your home.

Southern California’s Christmas leadership is not purely secular. L.A. is the largest archdiocese in the country, with 4.3 million Catholics. And Orange County hosts the church of this era’s most prominent evangelical Christian pastor, Rick Warren.

But let’s not kid ourselves. The 21st century Christmas is about capitalism and dreams and artifice, and no place does dreamy capitalistic artifice with the skill and gusto of California. Heck, our largest city, Los Angeles, even derives one of its most popular nicknames from a popular Christmas decoration. They don’t call us Tinseltown for nothing.