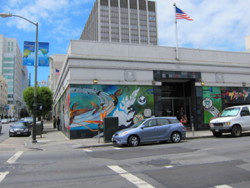 An eight story mixed use residential project is planned to replace the Post Office at 101 Hyde Street that has long been a haven for out of neighborhood drug dealers to do business. The proposed project, designed by Theodore Brown & Partners, will demolish the current single story, prison-like structure that has been a neighborhood eyesore since its prior use as a Bank of America. As I wrote last July, the Post Office has long been the leading haven for drug dealers in the Tenderloin. Its transformation into an 85-unit residential dwelling with over 6000 square feet of ground floor commercial space will turn a major negative into a huge positive, revitalizing a critical neighborhood corner. With the former KGO building set diagonally across the street set to begin renting in late June, the long struggle to reclaim Golden Gate Avenue in the Tenderloin is reaching success.

It’s great to open a letter and get great news. Such was my experience this week when I opened a letter from the SF Planning Department announcing one of the most troubled single sites in the Tenderloin would soon be transformed from a drug dealer haven to providing housing and retail uses.

Before getting too enthusiastic I contacted the Planner and the project sponsor to make sure this proposal was real. Both confirmed that it is. While the project must still secure Planning Commission approval, I would assume a unanimous vote for this huge step forward for the Tenderloin.

Consider what is happening on Golden Gate Avenue: Philz Coffee is renovating its space at Larkin and will open within a few months; the notorious Hyde Street Post Office will soon close (and a vacant building is an upgrade as it prevents dealing from inside and denies dealers the ability to enter the building to evade police); the former KGO building reopens in June; the beautifully restored Central YMCA at Leavenworth will soon be fully reopened with a medical clinic, theater, and commercial tenants; and at Jones St. Anthony’s is building a new dining hall and housing above via Mercy Housing (groundbreaking is Jan. 24 from 3-5pm)

Eliminating the Post Office problem will leave the first block of Turk and the SEIU Local 87-owned parking lot at Turk and Hyde as the two remaining centers of illegal drug activity in the Tenderloin. Plans to resolve the former are moving forward, while the latter site—-which really offers a terrible perspective on the neighborhood as traffic goes down Hyde— remains intractable.